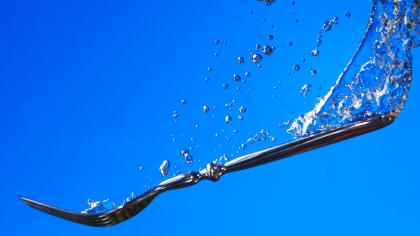 Jewish law requires immersing in a mikveh utensils used with food. This only applies if the utensils are made of certain materials (generally metal and glass) and if they were previously owned by gentiles. For example, when a Jew buys silverware that was made by a gentile, he has to immerse them in a mikveh before using them. This is common practice in observant Jewish homes, based on a biblical verse (Num. 31:23; Shulchan Arukh, Yoreh De’ah 120). A surprising omission from law codes raises the question of what to do when common practice eludes explanation.

The Sefer Ha-Chinukh (175) includes the law of immersing utensils with that of an adult immersing in a mikveh to become pure. In other words, immersing a utensil purifies it. Why is it impure? The utensil could be impure because of the non-kosher meat a gentile presumably would cook in it. However, even new, never-used utensils must be immersed in a mikveh. Perhaps this law assumes that a gentile, who is not commanded on matters of ritual purity, would not be careful to keep the utensils pure. Either way, we have to assume this is a general rule that applies even in exceptional cases, even if we know that the utensils have been kept pure.

The question arose in the late nineteenth century whether a convert must immerse his previously owned utensils after his conversion. [1]The entire discussion here refers to utensils the convert owned before his conversion. Any new utensils he buys after his conversion follow standard rules of immersion. To my knowledge, the first halakhic authority to ask this was Rav Yosef Zundel Hutner of Eishishok, in his 1880 legal work Chevel Yosef (Chadrei De’ah 120:1). [2]Rav Moshe Sternbuch, in a responsum cited below, quotes Rav Yitzchak Bamberger, in his Yad Ha-Levi, as exempting a convert from immersing his utensils. Rav Bamberger died in 1878, so he would precede … Continue reading A convert obviously must either kasher all his food utensils or buy new utensils. Once he completes his conversion, he must observe the kosher laws fully. However, the utensils he buys or kashers before his conversion are owned by a gentile. Once he converts, does he have to immerse all those utensils? Rav Hutner notes that this is not the practice but does not have a good explanation why that is the case. He suggests that perhaps a convert’s case is dissimilar from the biblical case, but leaves it as an open question.

Rav Tzvi Hirsch Shapiro, in his influential compendium of commentaries Darkhei Teshuvah (120:4; published in the 1890’s), quotes Rav Hutner somewhat inaccurately (I’m not the first to notice this). He says that Rav Hutner held the view that a convert must immerse his utensils.

Rav Yitzchak Aharon Ettinger, in his 1893 Responsa Mahari Ha-Levi (no. 109), implies that a convert does not have to immerse his utensils. He says that he is not aware of any mention of it in the Shulchan Arukh. Its omission from the code of religious implies that it is not an obligation.

In a 1918 sermon, Rav Shmuel Borenstein (Shem Mi-Shmuel, Matos, vol. 3 p. 430) quotes his famous father, Rav Avraham Borenstein, author of Avnei Neizer, as offering a surprising explanation why a convert does not have to immerse his utensils. When a convert enters the Jewish people, he acquires the status or sanctity of a Jew. At that time, his utensils receive the same status. Effectively, the utensils convert with him. I have trouble understanding this approach. However, Rav Avraham Borenstein was a very important halakhic authority and his opinions carries significant weight.

In a 1919 responsum, Rav Shimon Greenfeld (Responsa Maharshag 2:48) similarly points out that authorities have not said that a convert must immerse his utensils. He suggests that the obligation only applies when the utensils change ownership. Since a convert continues his ownership, he is not obligated to immerse the utensils.

Of the above authorities, the two with the longest shadows are Rav Shapiro and Rav Borenstein, the authors of Darkhei Teshuvah and Avnei Neizer, respectively. The former implies that a convert must immerse his utensils and the latter that a convert need not. We should keep in mind that, generally speaking, immersing utensils takes time and effort (maybe an afternoon of work) but does not cost money. Ruling strictly does not entail additional cost for the convert. This leaves more room to rule strictly, especially since most authorities consider this a biblical obligation. The attempts to explain a convert’s exemption have not been particularly convincing. It is hard to maintain even a long-standing exemption from a biblical obligation if it cannot be explained. [3]Two examples that come to mind are refraining from the daily Cohen’s blessing except on holidays and failing to sleep in a Sukkah. Many authorities have attempted to reinstate those practices, … Continue reading

Rav Yosef Shalom Eliashiv (quoted in Kovetz Beis Ha-Midrash, Tammuz 5711, no. 27, cited in Rav Shlomo Aviner’s commentary to Kitzur Shulchan Arukh 37:1) dismisses the arguments exempting a convert from the practice. He believes that, like any other Jews, a convert must immerse his utensils. I do not have access to the original source but he seems to require immersing the utensils with a blessing. Rav Shlomo Wosner (Shevet Ha-Levi, vol. 4 92:2, vol. 6 245:2) explicitly rules that a convert must immerse his utensils with a blessing.

In a recently published responsum, Rav Asher Weiss (Responsa Minchas Asher, vol. 3 no. 66) rules that a convert does not need to immerse his utensils. Rav Weiss stresses how common conversions are. The fact that this question did not arise until the late nineteenth century argues strongly for an existing practice to exempt converts from immersing their utensils after conversion. This long-standing practice should remain in place. He attempts to explain this exemption in a way that seems to follow that of Rav Greenfeld, mentioned above.