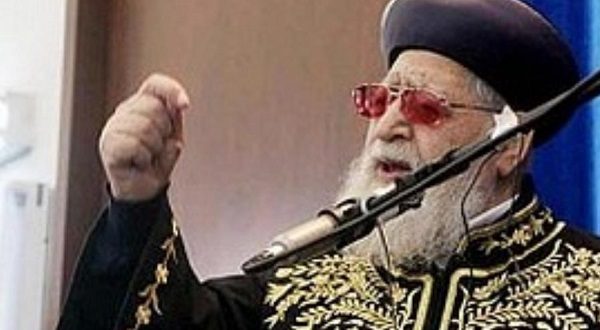 Looking to unify a nation of Jews with diverse practices brings challenges, and some will lean more towards imposing unity, others towards tolerating diversity. Yabia Omer 8; Even HaEzer 26 shows an example of R. Ovadya Yosef opting for diversity in a remarkable way. Dated Rosh Chodesh Sivan 5734 (1974), it’s written to R. Yitzchak Yedidya Frankel, the Ashkenazic Chief Rabbi of Tel Aviv/Yafo (who stayed in that position until his passing in 1986; he was the father in law of R. Yisrael Meir Lau, later the Ashkenazic Chief Rabbi, and currently Chief Rabbi of Tel Aviv/Yafo) about a man who wants to perform yibum with his sister-in-law.

(It’s a bit surprising that R. Frankel was writing about it, since the man is clearly Sephardi, and there was a Sephardi Chief Rabbi in Tel Aviv, R. Hayyim David Halevy. Just recently, I had occasion to leaf through Rabbis Marc and Hayyim Angel’s biography of R. Halevy; he implies that R. Halevy, of Turkish origin, and R. Yosef, of Iraqi origin, didn’t always see eye to eye. In addition, as we’ll see, R. Yosef here took a remarkable position; it could be that R. Frankel knew of his view, and was checking that he really held this way, rather than turn to R. Halevy, who might have ruled differently.)

This brother-in-law, in other words, was interested in marrying the widow of his childless brother, as was she (the responsum phrases it as “she was willing to accept the judgment of the court,” which isn’t necessarily the same thing, but let’s assume it is, that she was also happy to marry him to fulfill the Torah’s mitzvah of yibum.)]. The Gemara implies some uncertainty about whether yibum is a good idea for most people, but Rambam and Shulchan Aruch seem to prefer yibum to chalitzah (the ceremony that separates the two, freeing the widow to marry someone else). Since these were Sephardim, R. Frankel leaned toward allowing them to follow that view.

(Rema’s view is that we are supposed to encourage chalitzah—the way R. Yosef speaks of the different camps of Jews and their contrasting rulings is very beautiful; he says that Ashkenazim are “yotzim be-yad Rema,” literally “go out with the hand of Rema,” playing on Shmot 14;8, that the Jews left Egypt be-yad ramah, with a mighty Hand, Hashem’s leading them out of Egypt.)

When the Chief Rabbinate Rules Counter to the Consensus

The main stumbling block to R. Frankel’s doing that was a ruling by both Chief Rabbis in 1950, that all residents of Israel, including immigrants from edot mizrach (eastern countries such as Yemen, Iran, Ira, and Syria), should no longer perform yibum (R. Herzog has a responsum on this, Heichal Yitzchak 1; Even HaEzer 5). R. Frankel wondered whether he should feel bound by that; he knew that R. Yosef had allowed/encouraged yibum among Jews from edot mizrach when he had been Chief Rabbi of Tel Aviv/Yafo (1968-73).

R. Ovadya Yosef agrees that he had indeed does so, and mentions a responsum of his from the second of Tammuz 5711 (1951, Yabia Omer 6; Even HaEzer 14, written soon after the ordinance was promulgated), where he rejected that ordinance. He had cited many if not most rishonim, such as She’iltot, Rif, Rambam, Ra’avad, Rashbam, Ramah (R. Meir haLevi Abulafia), Ramban, Rashba, etc., as well as significant later authorities such as Maharam Alashqar and Mabit (and many others, including Mahari Taititzak, who told his own son to perform yibum when the situation arose in their family) agreed that yibum was what the Torah and the conclusion of the Talmudic discussion prescribed as preferable.

Radvaz in the fifteenth century characterized yibum as the custom of wide swaths of Jewry, certainly all of what we call Sephardic Jewry, and said that Rabbenu Peretz, an Ashkenazic authority, agreed. Radvaz concludes that even though Rashi and Tosafot followed the Talmudic view of Abba Shaul, who worried that the couple would embark on this yibum with improper motives, overwhelming weight of halachic opinion on the other side is what we should do.

I’m leaving out a few more sources in the same vein. Suffice it to say, R. Yosef offers ample evidence for his next statement, that it is hard to understand how the Chief Rabbis could prohibit yibum. That’s especially true of R. Uzziel, a Sephardi (as I hinted above, I think there was some tension between two, because of their different heritages but also their different approaches to how to bring unity to the Jewish people, as we’re about to see), who decided not to dispense with the ruling of Shulchan Aruch, the absolute posek of the Land of Israel (this was a lifelong position of R. Yosef’s, not just invoked here).

That’s why he thought Jews of communities with such a tradition should be encouraged to perform yibum. R. Uzziel ruled as he did, R. Yosef says, because he was interested in bringing the Jewish nation closer together; in his view (and this, in my very limited experience of R. Uzziel, accurately characterizes him), the way to unity was to accede to the demands of the Ashkenzim, to forge a single practice.

R. Yosef cites a book called HaTzvi Yisrael, which says that R. Uzziel once suggested giving up on Sephardi shechitah (kosher slaughter) in Yerushalayim, as a way of reaching a single unified practice. R. Tzvi Pesach Frank—the Ashkenazic Chief Rabbi of Jerusalem, for many years—absolutely refused to accept such an idea, and said that if it passed, he himself would organize Sephardi shechitah, because each community should follow its traditional customs.

Yibum Requirement of Purity of Motive

He cites R. Uzziel (he gives a reference to Shu”t Mishpetei Uzziel, but I couldn’t find it) as saying that for all that Israel is indeed a place that follows the rulings of Shulchan Aruch and not Rema, in this case it makes sense to follow Rema, because the Gemara is clear that we only permit yibum when we are confident of the couple’s motives. If the two are marrying for any reason other than the obligation (such as: they find each other attractive), it’s close to being a probited arayot relationship.

R. Yosef is surprised by this claim, since he reads the debate in the Mishnah as being about exactly that question. R. Uzziel had cited the position of Abba Shaul, but the general group of rabbis held that the obligation of yibum is mikol makom, regardless of motive. He cites rishonim who say that, and points out that R. Uzziel read Abba Shaul more stringently than most prior readers as well.

R. Uzziel understood Abba Shaul to see a Biblical prohibition in yibum with improper motive, whereas Ritva (a rishon) said it was Rabbinic. Further, Shu”t Shevut Ya’akov argued that Abba Shaul would have accepted dual motives—the brother is attracted to the widow and is interested in fulfilling the mitzvah. R. Yosef adds that he thinks we have to assume Jews are concerned enough with the Torah that they at least have dual motives in such situations.

On the specific issue, in other words, R. Uzziel read even Rabbanan, who preferred yibum, as only doing so if the couple had the right motives, and that their debate with Abba Shaul was over whether we have to assume that or not. R. Yosef is saying that that’s exaggerated, that Rabbanan preferred yibum even if the motives weren’t pure, and had sources that said that even Abba Shaul would accept mixed motives.

The Path to Unity

That issue aside (on which it seems to me that R. Yosef is on stronger ground), he also thinks R. Uzziel made a poor choice regarding how to bring about greater unity in the Jewish people. To ask Sephardim to yield to Ashkenazim, or vice verse (although I think the history of the early State was that Ashkenazim had the upper hand, were unwilling to give up their customs, and so R. Uzziel found himself suggesting that Sephardim would do what Ashkenazim did. I believe historians think that R. Yosef found that whole history irksome and discriminatory, part of what led him to form Shas, to protect the rights of Sephardim as Sephardim).

R. Yosef’s view was that each community should continue its own traditions. He pointed out that that’s how Jewish life is conducted around prayers, shechitah, and more, and no one complains. R. Kook, too, has a letter warning Ashkenazim not to buy Sephardi-slaughtered meat (but in no way calling on Sephardim to change their customs).

R. Yosef did not see this as a problem for national unity, because everyone knows that each community of Jews follows the path of its forefathers, so why is yibum any different? Therefore, this ordinance of the Chief Rabbinate is null and void (he notes that Bach in a responsum said that if an Ashkenazic couple was adamant about yibum, we can’t stop them, since it is a mitzvah, and we don’t have the ability to ordain that people not keep a mitzvah; this seems to say that the Chief Rabbinate were wrong in their making exactly such an ordinance, although the Bach did live four hundred years ago, such that circumstances might have materially changed).

That means that if a Sephardi couple wishes to perform yibum, they should be allowed to do so. More, if either the man or woman is inclined to opt for chalitzah, R. Yosef thinks we should try to  persuade that person to agree to yibum, by explaining the importance of this mitzvah.

I consciously refrain from questioning the responsa I find, since it’s not my place to do so. Here, though, I would like to raise two issues for further thought. First, R. Uzziel might have been too yielding in seeking a unified custom, but it seems to me that the Gemara’s ideal for unity was not a bunch of communities living side by side, each with its own customs.

While that’s how it has worked out so far, and I don’t see an easy path to a different model, I wonder whether a dispassionate reading of halachic sources is as comfortable with multiple communities in one city or neighborhood as R. Yosef was. I also wonder whether the history of discrimination against Sephardim (and of R. Uzziel’s readiness to give in for the sake of the greater goal of unity) in some way shaded R. Yosef’s perspective of whether forging a single unified practice could work, or was a value.

(If the suggestions for a single unified practice really partook of both communities’ views—Ashkenazi shechitah, Sephardi prayer and Pesach customs and acceptance of yibum, let’s say—would he have reacted the same way?)

The second issue is what it means to reject an ordinance of the Chief Rabbinate (both before and after he became Chief Rabbi himself). The substance of the issue aside, once the Chief Rabbinate rules a certain way, what does it do to the institution if rabbis, even great Torah scholars, make clear that they feel comfortable rejecting that view? Because while for R. Yosef it might only have been this issue, for others (likely of lesser stature) it would be other issues.

That institutional factor seems to me also one worth addressing—what are the standards R. Yosef would have held for when an ordinance of the Chief Rabbinate was so wrong, that it was acceptable to ignore it? And, whatever that standard was, how does that affect the attempt to have a functioning, viable Chief Rabbinate?