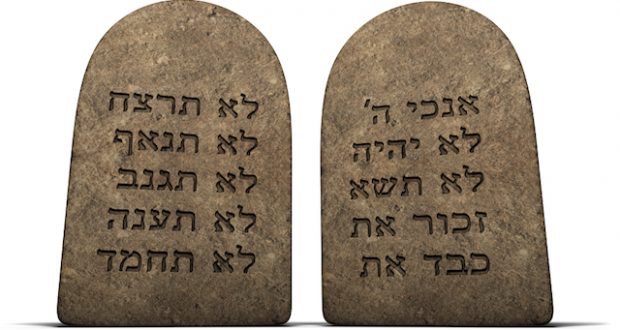 The Heresy of the Ten Commandments

What is the most important passage in the Torah? The debate over a Shavuos custom teaches that answering this question opens the door to claims that other passages are unimportant. Consider Rambam’s statement in his eighth fundamental principle, based on Sanhedrin (99b), that the entire text of the Pentateuch was written by God, even seemingly mundane verses like “And the sister of Lotan was Timna” (Gen. 36:22). When we give precedence to one verse, another verse might lose value in people’s eyes. We can see an echo of this concern in the Talmudic statement regarding the Oral Torah (Eruvin 64a): “Whoever says ‘this teaching is good’ or ‘this teaching is not good’ destroys the treasure of Torah.” Even preferring one passage implies a rejection of others.

If we forget the heresies of the past, we are condemned to repeat them

This is not a theoretical exercise but a result of historical experience. At one point, some Jews had a custom of reciting the Ten Commandments as part of their daily prayers. Sectarians claimed this was a preference for this passage and rejection of others as emerging from human rather than divine hands. In Israel during the third century, in the time of R. Shmuel Bar Nachman, this practice was rejected because of the concern of this sectarian argument against the sanctity of the Torah (Yerushalmi, Berakhos 1:5). In Babylonia in the same century, in the time of Shmuel, they likewise discontinued this practice because of the sectarians (Berakhos 12a). The Babylonian passage also quotes R. Nassan, of the second century in Israel, as rejecting the practice because of the sectarians.

Who were these sectarians (minim) who believed that the Ten Commandments came from God but not the rest of the Torah? The historian Geza Vermes [1]“The Decalogue and the Minim” in In Memoriam Paul Kahle (Berlin, 1968), pp. 232-240. suggests that these are Jewish Gnostics. Another scholar suggested to me that these are Marcionites (an early Christian sect), who rejected the Hebrew Bible.

Even in later centuries, after the Jewish Gnostics and the Marcionites were merely a footnote in history, this prohibition remained in effect. Rav Shlomo Ben Aderes, in thirteenth century Spain, invoked this concern in response to a proposal to recite the Ten Commandments daily in synagogue (Responsa 1:184). Similarly, Rambam, in twelfth century Egypt, forbade those who normally sit during the Torah reading to stand specifically for the reading of the Ten Commandments (Responsa, ed. Freiman, no. 46).

Yet, today many have the custom of standing during the Torah reading of the Ten Commandments, particularly at the morning services of the first day of Shavuos. Is this custom acceptable or should it be discontinued? Rav Shmuel Abohab, seventeenth century Venice, distinguishes between daily recitation, which the Talmud forbids, and standing when the Torah reading happens to be the Ten Commandments (Devar Shmuel 276). In the latter, we are reenacting, to a degree, the original event. The Jews received God’s great presence and responded by rising out of respect. When we read that passage in synagogue, we respond similarly. Rav Yosef Chaim David Azulai (the Chida), in eighteenth century Israel, also differentiates between regular Torah reading (Kisei Rachamim to Masekhes Soferim 12:5; Tov Ayin, no. 11).

However, after quoting these sources and more, Rav Ovadiah Yosef (Yechaveh Da’as 1:29) defers to the Rambam’s prohibitive ruling. He argues that those who permitted were unaware of the Rambam’s responsum. Had they known, they would have followed his precedent. Therefore, Rav Yosef concludes that we should actively discourage those who stand specifically for the Ten Commandments in the Torah reading.

Rav Moshe Feinstein (Iggeros Moshe, Orach Chaim 4:22) upholds the custom to stand. Like Rav Shmuel Abohab, Rav Feinstein distinguishes between daily recitation and standing for the Torah reading. He points out that those who stand specifically for the Ten Commandments also stand for other readings, such as the Song of the Sea and the conclusion of each book. Also, they stand for the entire reading, which consists of more than just the Ten Commandments.

Other recent authorities ruled strictly. Rav Yosef Shalom Eliashiv forbade standing specifically during the Ten Commandments (Mevakshei Torah, no. 52 p. 66; Va-Yishma Moshe, vol. 2 p. 66). Rav Shlomo Zalman Auerbach did not stand up for the reading of the Ten Commandments (Ve-Aleihu Lo Yibol, vol. 1 p. 100). Rav Chaim David Ha-Levi (Aseih Lekha Rav 6:21) prefers sitting during the reading but does not insist on discontinuing the practice of standing. Rav Moshe Sternbuch (Teshuvos Ve-Hanhagos 1:144) permits the practice of standing during the reading of the Ten Commandments, as does Rav Ovadiah Hedaya (Yaskil Avdi 2:1. The sources in this paragraph are quoted by Rav Mordechai Tzion in an editorial note to Rav Shlomo Aviner, Piskei Shlomo, vol. 2 p. 237).

IV. What This Means To Us

Some might object to the strict rulings that there is no apparent reason to continue this ancient objection to sectarians who no longer exist. I reject this objection for a substantive reason, not just procedural concerns. I find it very meaningful to remember the heresies which our Sages actively opposed through communal ordinances. First, it is important to remember the theological battles of our past for the sake of knowing where we came from. Second, if we forget the heresies of the past, we are condemned to repeat them. This specific view, that some passages of the Torah come from God and some do not, compare in certain ways to the views of one of the great Conservative thinkers of the twentieth century, Louis Jacobs. [2]I discuss Jacobs’ view at length in a forthcoming paper. The recurrence of this heresy in new clothes should strengthen our resolve to continue the practices and beliefs of our Sages.