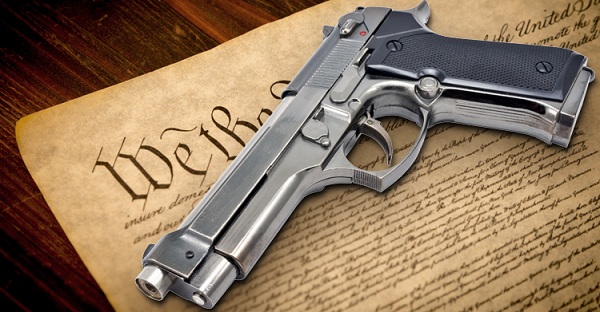 Laws about gun control serve as perpetual fuel for political debates. However, everyone agrees that some people should carry guns in some circumstances. Whether police officers or soldiers, on duty or prepared for duty, some people need to carry guns in order to protect the public. In Messianic times, weapons will be turned into ploughshares (Isa. 2:4). Until then, weapons serve a necessary purpose in this unredeemed world.

Anyone who owns a gun needs to understand proper gun training, safety and usage in order to avoid tragedy. These issues are crucial but not our topic. Here I am interested in exploring other aspects of gun ownership.

I. Bringing a Gun Into a Synagogue

Rav Meir (Maharam) of Rothenburg is quoted as saying that you may not bring a long sword into a synagogue because it contradicts the purpose of prayer–prayer increases a person’s life (Berakhos 8a, 54b) while a weapons shortens life (Orechos Chaim, Hilkhos Beis Ha-Knesses 7; Kol Bo 17; Tashbetz 202). Similar ideas can be found in a number of rabbinic passages. The Gemara (Sanhedrin 82a) says that you may not enter a beis midrash, study hall, with a weapon. The Mekhilta (Ex. 20:22) explains the prohibition against using tools to fashion the stones of the altar that the altar is intended to extended people’s lives while iron shortens lives.

However, numerous rabbinic passages mention a sword in a beis midrash, such as Shabbos 17a, 63a; Mo’ed Katan 18a; Sanhedrin 94b. Rav Reuven Margoliyos (Margoliyos Ha-Yam 82a:34) suggests that a sword was brought to the entrance but not inside. This is somewhat difficult. However, all these passages refer to a beis midrash and not a synagogue.

Rabbeinu Peretz added a gloss to Maharam’s comment that the only concern is when it is uncovered. This can be interpreted in two ways. One possibility is that Rabbeinu Peretz was qualifying Maharam’s statement, saying that only an uncovered knife is forbidden (Eliyah Rabbah 251:10). Alternatively, Rabbeinu Peretz disagrees with Maharam and permits someone to enter a synagogue with a long sword but forbids someone whose head is uncovered to enter (Birkei Yosef 251:9).

The Taz (Orach Chaim 151:2) compares this rule to a similar rule requiring covering any knives on the table while bentching, reciting grace after meals, except on Shabbos and holidays (Shulchan Arukh, Orach Chaim 180:5, from Orechos Chaim, Hilkhos Birkas Ha-Mazon 8). The Taz asks why we have the option to cover a knife for bentching but not for prayer. He answers that covering works for both. However, at the table, we have small knives that we can easily cover. For prayer, we are discussing long swords that are hard to cover. However, if we can cover the long sword, then everyone agrees you can bring it into a synagogue.

Mishnah Berurah (151:22) and Arukh Ha-Shulchan (151:11) agree that covering is sufficient to allow bringing a gun into a synagogue. Rav Ovadiah Yosef (Yechaveh Da’as 5:28) adds that if you cannot cover the gun or put it in a safe place, you may rely on the lenient opinion and bring the gun uncovered into a synagogue.

Rav Eliezer Waldenburg (Tzitz Eliezer 10:18:6) adds another factor. A gun without bullets is relatively harmless. While you can use it to hit someone hard, you can do the same with a book or a pen. Effectively, removing the bullets from the gun disables it as a weapon, thereby permitting you to bring it into a synagogue. (He does not say that turning the safety on disables it.)

Therefore, he provides the following order of behavior:

Again, safety has to come first. This rule should never place anyone’s life in danger. Be smart and safe.

II. Carrying a Gun on Shabbos

The Sages forbade carrying utensils on Shabbos without a reason. Certain utensils contain more restrictions. A utensil primarily used in forbidden work is called a “keli she-melakhto le-issur,” and may only be carried in order to use the space in which it currently rests or for a permitted activity. For example, you may only carry a hammer if you want to use it for a permitted purpose, like cracking a nut, or if you want to put something like a book in its place. Is a gun like a hammer, a utensil for a forbidden purpose that may only be carried for a specific, permitted purpose or for its place?

Rav Shlomo Goren (Meishiv Milchamah, vol. 1 no. 61) argues that a gun is used for a permitted purpose. Since the only time a gun is fired is for self-defense purposes, which are permitted on Shabbos, the gun is not classified as a utensil for a forbidden purpose.

Rav Yekusiel Halberstam (Divrei Yatziv, Orach Chaim, vol. 2 no. 148) argues that a gun is primarily carried as a deterrent to instill fear. Most police officers never fire their guns. Since the primary purpose of a gun is to be carried, which is otherwise permitted on Shabbos, the gun is classified as a utensil for a permitted purpose. Shemiras Shabbos Ke-Hilkhasah (ch. 20 n. 28) quotes Rav Shlomo Zalman Auerbach as saying that during peacetime guns are mainly used for inducing fear. Rav Eliezer Melamed (Peninei Halakhah 27:17) quotes Rav Auerbach (Shulchan Shlomo, vol. 2 308:16) similarly. [1]Rav Ephraim Greenblatt (Rivevos Ephraim, vol. 4 no. 88) quotes a friend who is unsure about the matter.

Rav Ya’akov Ariel (Be-Ohalah Shel Torah, vol. 2 no. 32) disagrees with Rav Goren’s argument (without quoting him by name). Rav Ariel points out that piku’ach nefesh, defense, is not permitted within the laws of Shabbos but overrides them, taking precedence over Shabbos. Shooting a gun for self-defense isn’t a permitted Shabbos action but an action that is allowed even though it is forbidden on Shabbos.

Rav Ariel argues against the claim that guns are mainly for deterrent purposes. A gun serves as a deterrent because you can shoot it. If not for that otherwise forbidden activity, the gun would be useless. Therefore, it should be classified as a utensil for a forbidden purpose. Rav Zechariah Ben Shlomo (Hilkhos Tzava 22:1, n. 1) agrees with Rav Ariel. Shalmei Yehudah (4:15) quotes Rav Yosef Shalom Eliashiv as similarly ruling that a gun is a utensil for a forbidden purpose.

The Sages debates whether you may carry a weapon on Shabbos where there is no eruv (Shabbos 63a). R. Eliezer believes that weapons that you wear are like jewelery. The Sages disagreed, arguing that since weapons will be abolished in the Messianic Era (Isa. 2:4), they are a disgrace to wear even now. The Shulchan Arukh (Orach Chaim 301:7) rules strictly. Rav Yechiel Mikhel Epstein (Arukh Ha-Shulchan, Orach Chaim 301:51) explains that this is discussing a layman but everyone agrees that a soldier’s normal clothing include weapons. Rav Yekusiel Halberstam (ibid.) is not entirely satisfied with this approach and quotes other considerations. He also points out that the rabbis in Israel ruled strictly on this. Rav Binyamin Zilber (Az Nidberu, vol. 1 no. 70) disputes the distinction between a layman and soldier, which no prior commentary had mentioned.

Rav Nachum Rabinovich (Melumedei Milchamah, no. 68) rules strictly unless there is some security purpose. If there is no security purpose, it is best to act strictly, if possible. But even the leniency only applies to wearing a gun in a holster or wrapped around your body, not in your hand or pocket.

Of course, whenever there is any question of a threat, you may carry a gun.

III. Reciting a Blessing on a New Gun

When you buy new items that make you happy, such as a fancy new suit, you may recite the Shehecheyanu blessing thanking God (Shulchan Arukh, Orach Chaim 223:3). However, since this blessing is optional, many refrain from reciting it (Rema, ad loc., 1). Rav Asher Weiss (Responsa Minchas Asher, vol. 1 no. 9) says that his mentor, Rav Yekusiel Halberstam, following in the path of his ancestor Rav Chaim Halberstam, never recited Shehecheyanu on new fruits or clothing, presumably because they did not feel sufficient joy over them.

Rav Shlomo Aviner (She’eilas Shlomo, vol. 3 no. 87) discusses whether you may recite a Shehecheyanu on buying a new gun. If it brings you joy, you should thank God for it. However, an argument can be made that a gun really symbolizes trouble. Should you recite a blessing on buying a defensive weapon? For example, Rav Zerachiah Halevy (Ha-Ma’or, end of Pesachim) writes that we do not say Shehecheyanu on the mitzvah of counting the Omer because it reminds us of the destruction of the Temple. Similarly, a gun reminds us of our present danger. Rav Aviner counters that the situation causes sadness over the danger. The gun provides protection, which brings joy.