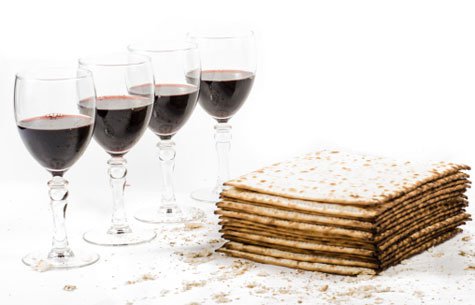 Though Rav Yochanan’s reason is the most common explanation for why we drink four cups of wine, the Halacha usually follows the position of the Rabbis, and, thus, the Seder should be conceived through their frame of reference.  However, throughout the Seder, there is a tension between emphasizing the position of solitary rabbis without taking into context the grander scheme that the Rabbis put forth for the meaning behind seeing ourselves as if we left Egypt and what that vision means for us today.

The four positions relayed in the Jerusalem Talmud provide four different ways to conceive the Exodus and its effect on us today.  Rav Yochanan and Rav Yehoshua ben Levi conceive the four cups as a means to see ourselves and our future by focusing back on our history – the former to our start as a nation, and the latter to the start of our descent into Egypt.  Yet Rav Yochanan focuses on the actual redemption, while Rav Yehoshua ben Levi offers a way to see its beginnings even in the darkness of Yosef’s enslavement in Egypt.  Rav Levi and the Rabbis conceive the four cups as a means to bring our redemption from Egypt forward into our present and future consciousness – the former to our current time and the latter to the end of days.  Like Rav Yehoshua ben Levi, they understand that focusing on redemption should include faith in its actual future occurrence, they only differ in whether that faith should entail gratitude for it even before the fact.  This disagreement parallels the discussion over which blessing one says over hearing good or bad tidings (BT Berachot 60b).

While the most popular, there is a difficulty with Rav Yochanan’s position, since the verses to which he refers include five major expressions and not four.  The four expressions of redemption are “I will bring you out,” “I will deliver you,” “I will redeem you,” and “I will take you.” The final expression, “I will bring you to the land” is not included as an expression of redemption.  There are two ways to understand this exclusion based on the purpose in the Bible of God’s message vis-à-vis its relationship to the Seder.

The first is based on what the symbolism means for the holiday itself.  Pesach is meant to celebrate the beginning of Israel’s redemption but it is not the goal for Israel in and of itself.  The purpose of the Exodus is ultimately for Israel to receive the Torah and to observe it in its land.  The journey to that goal begins with the four expressions of redemption on Pesach, yet it continues through Shavuot and Sukkot to our everyday lives.  The Seder is a celebration of the journey’s initiation, but we should remember that it is only the first steps.

The second way to understand this exclusion is based on our present mindset.  In the complete message to Moshe, from which these verses come, Hashem tells Moshe to go to Israel and tell them that Hashem will redeem them.  When Moshe went to tell them, however, the next verse states, “And Moshe spoke so to the children of Israel; but they hearkened not to Moshe because of their impatience of spirit, and the cruel bondage.”  At the beginning of our Seder, when we are beginning to accept the idea of being slaves in Egypt and, today, when we have not yet reached the end-of-days, Rav Yochanan’s reasoning emphasizes our historic redemption, without any reference to our current impatience.  Each glass of wine thus symbolizes specifically our Exodus from Egypt, so that we maintain the correct mindset regarding our redemption.

Rabbi Yehoshua ben Levi’s statement fits closely with the Targum Yerushalmi, which paraphrases Yosef’s interpretation of the cupbearer’s dream as follows: “The three vines are the three forefathers of the world, Avraham, Yitzchak, and Yaakov, whose descendants will be enslaved in Egypt with mortar and bricks and all kinds of servitude in the open air but who afterward will be saved by three shepherds.  And your words, ‘I took the grapes and squeezed them into the cup of Pharoah and gave the cup in Pharoah’s hand,’ refer to the cup of wrath that Pharoah will have to drink in the end…”  The implication of this symbolism is that one should not see Israel as a theological-political entity that was created through the Exodus.  Rather, the Exodus is part of a much longer trajectory that began with a family that grew into a nation.  Similarly, the longevity of Israel and its ultimate redemption will come because of the familial bond between Jews and not simply through ideological affiliation and common goals.  In addition to our common purpose, family members act for one another and they are guarantors for one another out of a sense of loyalty to each other, and it is that three-strand cord cannot be broken.

Rabbi Levi and the Rabbis each understand the cups to provide surety given our current situation.  They disagree that our impatience will lead to hearkening not to Moshe.  The difference between them lies in the frame for which we should conduct our Seder.  Rabbi Levi understands the Seder to be a celebration of redemption and our unfailing reliance on its occurrence despite our contemporary situation.  The Rabbis, on the other hand, want us to envision the future redemption as already occurring, making it as sure as our redemption from Egypt.

Through this explanation of the Rabbis’ statement, one could also recognize the reasoning behind Rabbi Tarfon’s fifth cup.  (Early editions of BT Pesachim 118a read, “Rabbi Tarfon says: over the fifth cup we recite the great Hallel.”)  Like Rav Yochanan, Rabbi Tarfon understood the cups of wine to serve as a means for us to embody our gratitude for being redeemed from Egypt, yet like the Rabbis, he understood that already in the beginning of redemption was the surety of its ultimate end in the future.  Therefore, he included a cup for “I will bring you to the land.”  This additional cup is associated with the Great Hallel, which commences not with declarations of praise as we left Egypt, which is said before the meal, but rather with praising Hashem as a nation already redeemed.

This question of how to frame our conception of “seeing ourselves as if we left Egypt” arises throughout the Seder, yet it begins as we pour our first cup of wine.