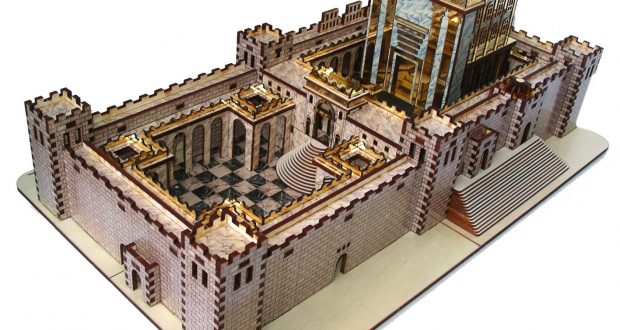 Rambam’s View of Sacrifices and Place of Mizbei’ach

The History of the Place of the Mizbeach, and Rambam’s View of Sacrifices

As the Jewish people return to Israel and rebuild Jewish life there, enthusiasts periodically raise the idea of restoring the sacrificial service, because halachah allows at least some sacrifices to be offered even if the Beit HaMikdash has not yet been rebuilt. For that, we would need to know the exact location of the mizbeach, the altar. It is in asserting the exactness of its placement that the Rambam makes the next comment that incorporates aggadic elements within the Mishneh Torah.

Hilchot Beit HaBechirah (Laws of the Select House) 2;1starts by declaring the place of the mizbeach “mechuvan be-yoter, very exact,” that it cannot be changed [that is one of the central reasons we cannot have sacrifice today], and then gives a series of events that happened there.

It was in the Mikdash, he tells us, that Yitzchak was bound to the altar for the Akedah. That’s a claim he can source to Tanach, since Hashem tells Avraham to go to Eretz HaMoriah, the land of Moriah, and Divrei Hayamim tells us that Shlomo built the Temple on Har HaMoriah, Mount Moriah. That verse says that that was the place where David had seen an angel stop a plague [for another time] and had then bought from Arnon (or, Aravnah, as Rambam calls him in the next halachah) the Yevusi.

A Place With Quite a History

Then, in 2;2, Rambam says that it is a masoret be-yad hakol, a tradition everyone knows, that the place where David and Shlomo built the altar (he is now more explicit that it’s the place of the altar itself, not the Mikdash as a whole, which explains why he waited to tell us all this until the second chapter of these laws) was also the site of several other important events. It was where Avraham built the altar to bind Yitzchak (that it was the exact place of the mizbeach has to be a tradition because the verses don’t prove that—Avraham is told to go to the land of Moriah, whereas this is Mount Moriah).

There, too, Noach built an altar when he left the Ark, Kayin and Hevel sacrificed on an altar [before any other discussion, we can note that Rambam assumes they used the same altar for their respective offerings], was where Adam offered a sacrifice when he was created, and from there he was created.

For that last claim, Rambam references a specific statement in Chazal, a Yerushalmi in Nazir that my Bar-Ilan found for me. Other than that, he does not tell us much that we need to try to find out: where he got these ideas (he says these traditions were “in the hands of everyone”), why he assumed they were authoritative, and why he finds this information vital to our understanding of the Temple and the altar. Let’s see what we can figure out.

Bereshit 8;20 tells us that Noach built an altar when he came out of the Ark, for burnt-offerings of some of the “pure” animals and birds. Bereshit Rabbah Noach 34 quotes R. Elazar b. Ya’akov that this was on the great mizbeach in Yerushalayim, where Adam offered his sacrifices (as we’ll discuss below).

Rashi quotes an earlier part of that Midrash, that Noach understood which animals to offer from the fact that Hashem had told him to bring so many more of them onto the Ark (seven pairs as opposed to one). I think academics debate whether Rambam knew Rashi’s commentary (my memory is that years ago Professor Yeshayahu Maori showed me a draft of an article where he listed places Rambam seems to be reacting to Rashi’s commentaries, but later in his life). If he did, Rashi’s quoting it might have supported Rambam’s thinking it was authoritative.

Otherwise, it’s a bit of a puzzle, because Zevachim 108a uses Noach’s example to prove an halachah about ha’alat chutz, offering a sacrifice outside the Mikdash. Rashi there speaks of what Noach did as making an offering on a bamat yachid, an individual’s altar, which makes it seem like it’s not the one at the Mikdash (of course, it could be that it’s treated as a private altar because it was before the Temple was built, but it still does not refer to it in any way as being in the place of the Mikdash).

However he resolved that, we can move on to the story of the respective offerings made by Kayin and Hevel. Kayin, the older brother, the farmer, brought some of his fruit as an offering to Hashem, and then Hevel also brought an offering, of the best of his sheep and their fats. Hashem accepts Hevel’s offering over Kayin’s, for reasons the text doesn’t make explicit.

After Hashem encourages Kayin to improve, he instead engages Hevel in conversation, which leads to a fight, and he kills him.Bereshit Rabbah Bereshit 22 wonders what Kayin and Hevel discussed just before Kayin committed this first murder. R. Yehoshua of Sichnin’s suggestion was that they they agreed to divide the world between them, but reached an impasse when it came to the place the Mikdash would be built. R. Yehoshua sources this in the verse’s referring to them as having been “ba-sadeh, in the field,” and then pointing out that the Beit HaMikdash is also referred to as a field.

From that Midrash, we do not yet know that they offered their sacrifices at the place of the future altar, only that it was ownership of that place that led to their fight. It’s Yalkut Shimoni Vayera 101 that says it (as far as my Bar-Ilan research found). The Midrash picks up on the fact that the Torah says that Avraham built “hamizbeach, the altar,” before the Akedah, which the Midrash takes as a reference to a pre-existing altar, where Noach offered sacrifices, and where Kayin and Hevel did.

Once the Midrash mentions Noach, it has sufficiently explained the definite article the verse used about the mizbeach. If the Midrash includes Kayin and Hevel anyway, it must have (Rambam seems to assume) meant it literally and historically.

We still no suggestion as to why this should be so; it may be an historical fact, but if it’s just coincidence, it’s not clear why the Midrashim would make sure to point it out. When we get to Adam harishon, the first man, I think we get the key to the whole picture.

Adam Sacrificed Where He Was Born

Yerushalmi Nazir 7;2 presents the tradition of R. Yehudah b. Pazi, that Hashem took a spatula’s worth of dirt from the place of the altar, and used it to create Adam, expressing the hope that by doing so, Adam would have staying power, would be able to survive and thrive. The Gemara then explains that the connection is inferred from the fact that Bereshit 2;7 says Adam was created from the dirt of the ground, and the same word, adamah, describes the altar in Shemot 20;21.

Bereshit Rabbah Bereshit 14;8 gives a possible explanation for why creating Adam from this place would give him lasting power. R. Berechyah and R. Chelbo say in the name of R. Shmuel bar Nachman that Adam was created “mimakom kapparato, from the place of his atonement.”

As we saw at the outset, Rambam includes that last comment in the Mishneh Torah. Why would Rambam accept these Midrashic sources as reflecting the history of this place.

It’s not enough to say that the Midrash asserted a view of history, because Rambam does not obviously accept all historical statements in the Gemara or Midrash as meant literally. Nor, even, does these texts’ citing of verses explain it fully, because he could have dismissed those as asmachta, as a Rabbinic way to attach a point they want to make to a piece of Scripture.

What Is the Temple For?

I don’t have any ironclad answer to that question, but I have a suggestion. The whole idea of a Temple (and sacrifice) presents problems for a thinker like Rambam, since it seems to say that some places in the world have “more” of Hashem’s Presence than others, seems to see value in offering sacrifices to Hashem, etc.

In Moreh Nevuchim, Rambam famously and controversially implies that the Temple was more for people than for Hashem. They needed a place completely dedicated to Hashem’s worship, and they needed some sacrifice; limiting it to one place was part of weaning them from it, is how Rambam sounds. I find that an unsatisfactory claim, especially since I am one of those who deny significant disparities between Mishneh Torah and the Moreh.

Buried in our Rambam here, I suggest, is an idea about Temple and sacrifice that runs counter to how most people imagine Rambam’s worldview. If Rambam truly accepts this history— there’s no reason for him to have included it here unless he believed it; it’s not like anyone would have noticed anything missing from a legal code if he left it out—it means the mizbeachwas put in a place that has recurring world-historical importance. It is where humanity started, where we’ve always gone for atonement (Adam) and for building a positive relationship with Hashem (Kayin and Hevel, Noah, Avraham).

It means Rambam might have seen an aspect to the Mikdash beyond that of sacrifice– sacrifice, the way everyone did it, had to be reined in and limited, as Rambam says in the Moreh. In addition (and this is an idea I can easily imagine him leaving out of the Moreh, since it is not the kind of idea rationalists would easily accept), the history of this place made it the ideal candidate for a location of most focused service of Hashem.

Sefer HaChinuch’s Reason for a Temple

Support for my theory comes from Sefer HaChinuch, Mitzvah 95, a long mitzvah where he struggles with why God would need a house. His first idea, based on Rambam in the Moreh, is that having one place where everything and everyone focuses on Hashem helps all of us do so as well, turns our thoughts and intent more effectively towards Hashem than in our usual lives.

That doesn’t solve the problem fully, because the Mikdash retains its sanctity even when there’s no structure there. To answer that, Sefer HaChinuch suggests that Hashem chose that as the place from which to bless people, whom He created from there, which I think alludes to the Midrash that we saw, that Adam was created from dirt from the place of the mizbeach.

Possibly, then, these Midrashim, our latest example of Rambam incorporating material he would not seem to have had to, show us a latent explanation for why the Beit HaMikdash was there: because Rambam understood it to be the place we humans got our start, the place we have always gone, sometimes to atone, but even more so to build our best relationship with Hashem.