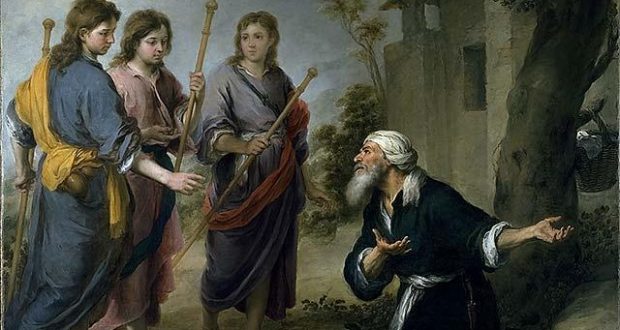 The Important Part of Welcoming Guests

Avraham’s welcoming of guests stands out for many people today even more than his adamant propagation of monotheism (a characteristic of his we discussed previously). It’s interesting to me, therefore, that Rambam mentions it only once in theMishneh Torah, a bit buried at the end of Laws of Mourning 14;1-3 (which is towards the end of Mishneh Torah as a whole).

More, Rambam’s version of helping guests takes a different approach to that act of kindness than we commonly express today. In laying out his view, finding the sources that led him to it (some of which are not purely halachic), and the way it differs for us today, I think we’ll find much of interest, including new insight into how Jews are supposed to perform kindnesses for others.

The last chapter of Laws of Mourning moves from the obligation to comfort the bereaved to “kindness obligations” more generally. He asserts a Rabbinic obligation to visit the sick, comfort the bereaved, attend funerals (and bury the deceased), assist brides in getting married, and accompany guests. These are all examples of kindnesses we perform with our bodies, with no set amounts for fulfillment.

Paragraph two singles out accompanying travelers whom we hosted on their way as more significant than the others. As Rambam tells us, this was a practice our forefather Avraham modeled, feeding wayfarers and accompanying them [that is explicit in the story of the three angels; Bereshit 18;16 tells us Avraham went with them to send them on their way. Here is a good point to note that “guests” means travelers, not neighbors with whom we enjoy socializing; there’s value in building social connections, but it seems to me erroneous to think of that kind of hosting as hachnassat orchim.  See also Rema Orach Chayyim 333;1, who seems to me to say that explicitly].

Rambam adds that welcoming guests is more vital than greeting the Divine, an idea he takes from a non-halachic statement inShabbat 127a. The Mishnah on which Rav Yehudah expresses this idea in the name of Rav came in the context of a Mishnah that makes exceptions in the rules of Shabbat to make room for guests—allowing us to move items we ordinarily may not touch on Shabbat. Rav said we can see that welcoming guests outweighs greeting the Divine because Avraham felt comfortable asking Hashem to wait while he attended to his guests [then Hashem apparently waited while Avraham prepared a meal, fed them, and accompanied them on their way].

Accompanying Even More Than Welcoming

That Gemara speaks only about welcoming, but Rambam adds that accompanying guests is more important, because whoever doesn’t accompany guests is like a murderer [for reasons we’ll have to consider]. The comparison of not accompanying to murder [also not an halachic statement] appears in Sotah 46b, where R. Yochanan says that in the name of R. Meir (the topic was why the Torah requires an act of atonement from the city closest to a corpse found murdered in a field).

Rambam still made a jump from what that Gemara says to saying that it’s more important than welcoming guests, since the latter was important enough to justify putting Hashem on hold. Migdal Oz, a commentary printed on the page of the standard Rambam, suggests that Rambam understood that accompanying was more important because Avraham asked permission towelcome the guests, but did not even ask when it came to seeing them off [that’s not a perfect answer, since the original permission might have included the entire mitzvah, including seeing them off, but it is the only answer I have seen as to how Rambam derived this idea].

Perhaps a text earlier on that page in Sotah also showed Rambam the greater mitzvah content of accompanying guests. R. Meir held that members of a city can legally force each other to subsidize levayah, people who accompany guests or wayfarers on the road out of town. Rambam codifies that in paragraph three of this chapter, along with the information that courts would appoint messengers to do this. Rambam then repeats the idea that neglecting to accompany wayfarers is like committing murder [despite having just said it in the previous paragraph; seemingly superfluous repetitions are supposed to be attention-grabbers, signals that we should take not of what’s going on].

Scripture tells us Avraham welcomed guests and that he went with them on the start of their continued journey. Other halachicsources make clear that the seeing travelers on their way part of this kindness was very important. But it was non-halachicsources that enabled Rambam to say that these kindnesses outweighed greeting Hashem and that the end of the mitzvah, seeing them off, was more significant than the beginning, giving them food, drink, and lodging.

To me, that makes this Rambam already worth careful consideration, since it’s another example of his inserting aggadicmaterial into his halachic presentation. Once we’re here, though, it seems worth noting how much his view differs from how we perform hachnassat orchim, focusing almost exclusively on providing food and lodging.

Some people do accompany guests out the door, or down the block, but Sotah speaks about going to the town limits or beyond. (Rambam, in 14;3 of Laws of Mourning, says even four amot is a great mitzvah—which he seems to have taken from anotheraggadic statement in Sotah, where R. Yehoshua b. Levi says that the four steps Par’oh walked with Avraham on his way was why he got to enslave the Jews for four hundred years). Why the discrepancy?

Be’er Sheva, by R. Yissachar Dov Eilenberg (ca. 1550- 1623, Poland and Moravia), noted that Semag and Semak (mid- to late 13th century) included the rules of levayah, but from the Tur (early to mid-1300s) on, codifiers omitted the idea of accompanying guests. He wonders why.

He suggested that roads were so dangerous, halachah could no longer obligate a host to risk heading on the road with his guest, at all. To show that halachah sometimes works this way, he points to the obligation to move to Israel. Tosafot to Ketubbot 110b, said that there is currently (meaning: 12th century France) no such obligation, because the Torah does not obligate us to take on that level of danger. The same logic, Be’er Sheva argued, frees a host as well.

That claim raises several questions (none of which mean it’s wrong, only that it rests on assumptions that are not intuitive). First, were roads in 14th-16th century Europe (the Tur wrote his work in Spain, but grew up in Germany, while R. Eilenberg was in Eastern Europe) more dangerous than the time of the Gemara? Were they meaningfully more dangerous than for Semag and Semak (only about a half-century before the Tur)?

Grant for a moment the answer is yes, or that some similar argument is true, such as that Tur was the first to realize how dangerous the roads had gotten. It’s still surprising that that would exempt the host, since the whole mitzvah seems aimed at protecting the traveler). In contrast, settling the Land of Israel, I could imagine arguing, was never specifically about bearing danger, so that when it became dangerous, the obligation was suspended. For Be’er Sheva, we would need to know how much danger lets the host off the hook—and, in such cases, would he have said that if the man got killed, the city wouldn’t have to bring an eglah arufah?

I hope to offer another answer, but first let’s look at how the halachic expression of this mitzvah changed once accompanying guests was off the table.

How We Keep It Now

Shulchan Aruch mentions welcoming guests in two places in Choshen Mishpat. 163;1 talks about what the members of a city can force on their fellow citizens, and includes the requirement to host people and give them tzedakah (but doesn’t mention, asSotah did, accompanying them).

427;7-8 is about the obligation to avert dangers, expanding it from what the Torah discussed– building fences around roofs—to any danger. Sema, a commentary, cites Darkei Mosheh (Rema’s commentary on the Tur) 426, who refers us to Rambam’s mention of accompanying, an apparent revival of the idea.

Aruch HaShulchan mentions it as an obligation, and gives a different reason we no longer observe it—people travel in carriages, not alone, so they don’t need accompanying; he also says Rema gave a reason, that travelers forego the honor of being accompanied (which puts the issue in a different framework, how we are supposed to honor guests). Aruch HaShulchan’s view still fits the idea of danger, except that even carriages are vulnerable to robbers (as movies set in the wild West remind us—you needed someone riding shotgun, hence the phrase).

One possibility, more clear in Rema but perhaps which fits Aruch HaShulchan as well, is that the obligation was more a question of honor than danger (although Rambam clearly didn’t see it that way, since he stressed that not accompanying a guest was like committing murder).

If I may offer my own suggestion, I would go the other way than Be’er Sheva. I think it’s possible that travel picked up after the time of Semag and Semak, but that travelers’ needs changed. A traveler is limited in how much s/he can carry when travelling by foot, horse or even carriage, so that finding hosts to replenish supplies was a vital need. Halachah understood that the mitzvah was to help travelers with their needs; when the roads were dangerous, helping ensure safe travel was the most important aspect of the mitzvah. Once that was no longer true, provisioning was still a communally enforceable obligation.

It suggests that seeing guests off became obsolete at some point, for a host of reasons—routes were better marked, the level of danger dipped (it’s worth noting that nowhere is it clear how dangerous roads would have to be either for us to feel the need to accompany a guest and/or for us to exempt ourselves because it’s too dangerous. Putting numbers to that seems to me to be anhalachic desideratum).

My idea would mean that Avraham taught us—in verses and then in the aggadic passages Rambam incorporated—to help travelers in the ways they need. For much of human history, the most important of those was accompanying the traveler, setting him on the right path, and (perhaps) being there in case danger came. Over time, that morphed into an obligation to be sure the traveler had food and drink.

Today, when kosher food is generally accessible, that, too, has receded, although Chabad Houses in farflung locations would be doing classic hachnassat orchim. For the rest of us, a place to sleep and a home-cooked meal might be all we can do.

In taking Avraham’s kindnesses seriously, as portrayed by non-halachic sources as well as halachic ones, Rambam shows us how to find our way to the best fulfillment of this example of kindness we do with our physical body.