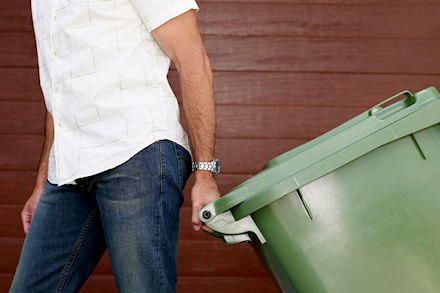 Question: My neighborhood’s garbage is collected on Shabbat. Isn’t it a problem having a non-Jew do melacha for me on Shabbat? What would the basis for leniency be, if there is any?

Answer: We will start with your assumption – that melacha is involved. The workers carry 4 amot in a public domain and into a private domain (the truck), which is a melacha, but only if there is no eiruv. It is possible that no part of the operation of the truck is done specifically for you (it would be a problem if the whole area is Jewish). The Rabbinic violation of muktzeh is a problem regarding garbage. While it is often permitted to take out garbage on Shabbat, e.g., leaving it in the home will likely cause a bad smell (see Orchot Shabbat 19:88), it usually need not be a bother in a garbage can outside.

So assuming it is forbidden for a Jew to throw the garbage into the truck on Shabbat, can non-Jewish workers do it for us? The critical factor for leniency is that the Jew does not tell, or, in this case, even care if the non-Jew does the work specifically on Shabbat (Shulchan Aruch, Orach Chayim 247:1). You too presumably do not care if the pickup is specifically on Shabbat. (This might not be true if they have not come in several days, they never work after sunset or on Sunday, and residents would have significant hardship and complaints if they did not come on Saturday.)

However, that leniency helps only if it is halachically considered that the work the crew is doing at that time is for their sake, not for yours. The most common way to fulfill this condition is when the worker is paid per job (kablan), so that we consider it that he is doing it for the money he receives (ibid.; see Mishna Berura ad loc. 1). If, though, he is paid by the day or other unit of time (po’el), he is considered to be paid money to fulfill the Jew’s requests, explicitly or implicitly, which is forbidden (ibid., based on Avoda Zara 21b).

The analysis of a sanitation crew’s categorization is not simple. They are presumably paid by the day/month (po’el) and not, for example, by the amount of garbage they remove. On the other hand, maybe we should look at the relationship between the homeowner and the municipality. The homeowner pays (usually with municipal taxes) for a host of services, including garbage disposal, which makes the municipality kablanim. The sanitation workers are working for the municipality, not the homeowners, and therefore the worker’s pay scheme is not relevant. There is another reason to consider them kablanim. The Shulchan Aruch (OC 244:5; see Mishna Berura ad loc. 24) says that if one has a long-term worker whose responsibility is to do one specific job, he is equivalent to a kablan. This is provided the Jewish employer does not complain if he takes off days here and there as long as the job gets done.

One can ask that it is forbidden for the non-Jew to work for a Jew on the Jew’s property (Shulchan Aruch, OC 252:2), due to marit ayin (people will think he is violating Shabbat – see Mishna Berura 252:17). Here, though, people usually put the garbage cans in the public domain before pickup. One might argue that this is a technicality, as the workers are still clearly doing work for the homeowner. However, since everyone knows that the homeowner has no special arrangement with the crew, and the general setup is permitted, marit ayin is not a problem (see ibid.). We are also not supposed to have non-Jews take things on Shabbat from a Jew’s house even when there is no intrinsic violation (see Shulchan Aruch, OC 252:1). However, this too is due to marit ayin issues, which should not apply.

It is permitted to put out the garbage even on Shabbat (when muktzeh is not a problem), but there are likely advantages to doing so before Shabbat (beyond our present scope).

There is similar analysis of the topic in Minchat Yitzchak (V:105) and Teshuvot V’hanhagot (I:278). We have also simplified several nuances in these matters. The bottom line is that, in standard cases, it is permitted for the garbage pickup to be on Shabbat.