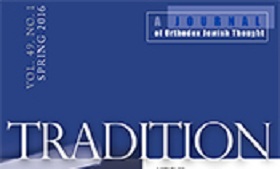 In a summary of a recent issue of Tradition, I incorrectly described Dr. Joel Wolowelsky’s article. In the latest issue, he responds and clarifies his view.

He explains that he believes semikhah is certification of knowledge and therefore would be appropriate for religious learned women, too.  But, he said, it is distracting for them to use the title “rabbi” because some object to women serving as a mara d’asra, and “rabbi” can indicate an ability to serve in that role. (He does not take a position on whether a woman can serve as a mara d’asra in a community that does not object to women serving in that role.)  He notes that learned women are currently called “rebbetzin” or “rabbanit” whether  or not their husbands are rabbis. He sees that title as a wiser choice.

I apologize for the mistake. At the end of his letter, Dr. Wolowelsky discusses whether a man with semikhah should use the title “rabbi” if he is not a pulpit rabbi or a full-time communal worker. He notes an OU resolution to that effect from 40 years ago. Tonight I will repost an article I wrote that addresses this issue. I believe that there are two views on this subject but, according to common custom, it is forbidden to fail to use a respectful title for a talmid chakham even if he is not your teacher.

Previous: Daily Reyd
Next: Who Can Be Called Rabbi?