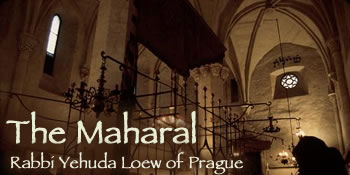 A Time Utterly Different Than Our Own

Maharal, Week Two: A Time Utterly Different Than Our Own

Maharal bases his ideas of how the days of Mashiach will look in Talmudic texts. He cites them at length, and goes through them step by step, interpreting them in the way that reveals his view of the Messianic world. Those interpretations, however, aren’t simple or obvious, and would take us too much time to engage critically—to read the text itself, then his reading of it, and then see the strengths and weaknesses of those readings would take us much more time and space than we have here. Instead, we’re going to mention the texts off which he’s working and his conclusions, leaving for another time the also productive endeavor of actually learning those texts with Maharal as our guide.

Our opening text this time is Sanhedrin 98a’s series of statements about what serves as a sign of the end of days (starting with R. Abba’s idea that the hills of Israel will teem with plant life, based on Yechezkel 36;8). Maharal sees each of the statements in the series as sharing the assumption that the world will be rendered desolate, physically, economically, and even in terms of Torah and its scholars, just before Mashiach comes and improves all that.

The starkest example is that there won’t even be fish for those who are ill. For Maharal, fish are lower creatures, so that the loss and destruction that will prepare the world for a new way of operating should affect them last and least (since change takes the world to a higher level, I think he means, it affects those already closest to that level most).

I am skipping his proofs that fish are lesser creatures; once he’s established that, he understands the Gemara’s idea that fish, too, will be lost as a sign of how thoroughgoing the change of the Messianic era will be. It will be a time when simplicity is the ruling value, so that anything not simple—kingdoms, the haughty, the very wealthy—will be lost, leaving a poor nation, whose complete simplicity readies them for the simplicity of the days of Mashiach (he closes the chapter by saying ve-zeh mevo’ar, this is clear; this is an example of Maharal’s repeated certainty that what he is saying is both true and clear.  I do not generally note when he does this, but the overall tendency bears attention—he is not just confident of what he’s writing, he is repeatedly and explicitly sure that what he is writing is the clear and obvious truth, if we’d only notice it).

You Can’t Get There Intentionally

Sanhedrin 97a had a baraita that said that three aspects of the world only come be-heseach hada’at, when we’re not paying attention. Maharal explains that as a function of the fact that all three are not part of the ordinary course of the world (we can leave discussion of the first two, lost items and scorpions, for another time). We can plan and arrange this world in certain ways but there’s no way to do that for that which isn’t part of this world. (Remarkably, that seems to say we cannot do anything directly to bring Mashiach; perhaps Maharal doesn’t think of keeping Torah and mitzvot well as direct action. Still, there were Hasidid rebbes who thought they could influence the upper realms and bring Mashiach; Maharal would seem to say that’s impossible).

Mashiach isn’t part of this world and so will only come when we’re not looking for him (he relates the Talmudic idea of Mashiach riding on a donkey to the Hebrew word for donkey, chamor being close to chomer, the material; Mashiach comes riding in on a control of the material, a suppression of it, that’s not a characteristic of this world).

Proof that Mashiach’s not fully of this world comes from  R. Shmuel bar Nachmani in the name of R. Yochanan (Baba Batra 75b)’s including him in a list of three phenomena with Hashem’s Name attached to them (the righteous and Jerusalem are the other two). To facilitate his arrival, we need to be distracted, such as by the war of God and Magog, and the economic hardships of the period before the Arrival.

Mashiach as the Old Age of the World

Maharal’s referring to Mashiach as not really of this world and linked with Hashem’s Name makes him sound almost nonphysical. He doesn’t quite mean that. To explain better, he notes that the time of Mashiach is referred to as the end of the world. Just as the end of people’s lives sees them receding from the physical, focusing more on the spiritual [like retirees who take on regular religious practices they neglected in their younger lives], the end of the world will be a time when everyone will seek to act only in ways that bring them closer to Hashem.

Shared goals will unify the people of the world. That unity is itself a sign of perfection, the essence of which is oneness. It is people’s becoming more focused on one central goal that is the meaning of Zechariah 14;9, that Hashem will be king over the whole world on that day (the last line of Aleinu); from Hashem’s perspective, that’s meaningless, since Hashem is always King over the world and One.

But humanity will be able to appreciate that as well, will (as Pesachim 50a says) stop making a different blessing on good news (hatov ve-hametiv) and bad (baruch dayan haemet), because we’ll see that it’s all from Hashem, and therefore appreciate the goodness in all of it.

Not only will Mashiach not be as physical as we are in these times, Maharal is saying, neither will we, since the world will be in its old age, when the physical recedes in importance, and we can see and value that which is really important.

The Song of Mashiach

Chapter 43 of the essay discusses Sanhedrin 94a, which talks about the possibility that King Hizkiyahu could have been Mashiach, but for the fact that he didn’t sing Shirah, a song of praise. Maharal rejects the idea that this was a failure of Hizkiyahu’s; he says the song to which the Gemara refers is a song reflecting how different that new time is, how complete in its perfection. Hizkiyahu knew that his time was not as perfect as necessary, so he didn’t sing the song [there are reasons to question this reading; for one, that the Gemara opens by saying Hashem wanted to make Hizkiyahu the Mashiach, and didn’t Hashem know that the world wasn’t complete? One answer to that, however, might lie in Maharal’s reading of the Gemara we’re about to see].

The earth steps in and says that it’s willing to sing shirah for Hizkiyahau. To Maharal, that means that the earth was verifying that Hizkiyahu had reached the perfection necessary to be considered Mashiach. But the Gemara then says a Heavenly Voice will come out, quoting Yeshayahu 24;16, that the secrets of the universe are Hashem’s, meaning that even the earth cannot know what kind of perfection characterizes the times of Mashiach.

Growth in the Times of Mashiach

The perfection that will characterize those times does not mean there won’t be room to grow, but it does mean complete change will not occur—evil will not have the opportunity to change to be good (one reason for that is that the value of the good will be so obvious, turning away from one’s past evil deeds will not qualify as repentance anymore). Apparently, then, when he speaks of it as a time with no change, he means no change of categories—a good person becoming more good, growing in his or her service of Hashem, isn’t the kind of change he thinks is contradicted by the perfection and stability of that era.

Maharal is so certain of what he’s writing, he is sure that Shmuel must agree. In the Gemara, the Amora Shmuel asserted that the only difference between this world and the Messianic era would be the political independence or supremacy of the Jewish state. That seems to assume there will be an evil inclination, for example, yet Maharal just said there wouldn’t be.

He could easily have said that yes, his picture follows the views in the Gemara that disagree with Shmuel. Instead, he says Shmuel could not have meant his statement about bigger-picture items. Individuals will slip up and sin, Shemuel holds (and the other opinion disagrees about this, too), but the majority of the world will be sin-free (since it’s otherwise not perfection).

Sanhedrin 99a has two different versions of a baraita recording views of how long yemot HaMashiach will last, ranging from forty to seven thousand years. For Maharal, each of those claims stakes a position on the nature of Mashiach’s role. R. Elazar held it would be only forty years, which views Mashiach as the one to take the Jews out of exile [paralleling the forty years it took to leave Egypt] and bring them to Hashem, Who will rule over them Himself, as it were. [This construction of it assumes that once it took the Jews forty years to leave Egypt—which was only because they sinned with the spies—that became the right number for that process].

The other views each have their own meaning as well. Seventy years is the full reign of a king, for example, and Mashiach deserves no less. Three generations, another view, is because that’s how long one long period lasts (children and grandchildren are still part of one’s own world). Beyond that, it’s a new world and a new kingdom.

The Greater Connection of the Jewish People with Hashem

We don’t have the space to discuss all the views. One more worth spending a moment on is that of R. Hillel, who said the Jews wouldn’t have a Messiah, because they already used it up in Hizkiyahu’s time. R. Yosef sharply disagrees, disproving it from the prophet Zecharyah’s still prophesying about Mashiach.

Maharal says R. Hillel couldn’t have meant there wouldn’t be a future redemption, since there’s so much in Scripture that predicts it. Instead, R. Hillel held the future redemption would be conducted solely by Hashem, that the Jewish people had lost the right to have a human lead the redemption.

This fullness did not characterize the Exodus from Egypt, in Maharal’s view, which was why we had to eat the Paschal sacrifice be-chipazon, in haste. For the future redemption, Yeshayahu 52;2 says “you won’t leave be-chipazon.” To Maharal, that means that this redemption will be so full, so eternal, that we can savor it slowly and at a calm pace. It will also, once here, not change significantly, so that we’ll be in no rush to enjoy it before it disappears.

Next time, more on what it means that the world will not change once Mashiach arrives.