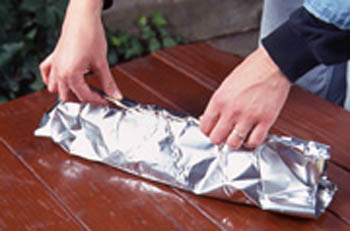 Question: I know that sometimes when warming something in a not kosher oven or a milchig food in a fleishig oven, he double wraps the food. When is this necessary and why?

Answer: A proper job of double wrapping solves virtually any issue of heating things up in ovens. Sometimes, less is needed, and sometimes double wrapping is only a stringency. We will summarize the issue but will not be able to cover every circumstance.

The classic and surest way for a non-kosher food to transfer ta’am (a sufficient amount of particles to give off taste), and thereby make a kosher food forbidden is for them to make direct contact when they are hot. Yet, two other possible ways are discussed in the sources: 1. They are heated up in close proximity so that reicha (vapor) from one is liable to reach the other. When the vapor is strong/wet enough, it is called zeiah, and the chance of significant transfer is greater. Which factors must be present for this to actually forbid the food, l’chatchila or b’dieved, is detailed, complicated, and includes machlokot, so it is beyond our scope (see Shulchan Aruch, Yoreh Deah 108:1). We will relate to scenarios in which the transfer is significant. 2. Heat and/or other factors cause particles to go from the food into utensils, from which they may go and “contaminate” other food that comes in contact with that utensil.

Now let’s analyze what can possibly happen in a treif oven. If one heats up kosher food at the same time with treif food, the vapor from the treif food can enter the kosher food. Here, there is a clear requirement for double wrapping for the following reason. With a single wrap, the treif food will make the wrapping treif. The hot kosher food on the inside of the single wrapping would then extract the ta’am from the wrapping and make the food forbidden. When working properly, the double wrapping ensures that there is nothing in between the two wrappings. Under those conditions, we say that ta’am is not transferred from one utensil directly into another one without the medium of a food or liquid (Rama, YD 92:8).

If the oven is “empty,” then even if is there is edible non-kosher residue on the walls and ta’am within the walls, it is unlikely that it will produce enough vapor to cause a problem. The problem is that the vapor of the kosher food could provide the medium to transfer the treif particles to the kosher food. However, to prevent this, it suffices to have a single cover to keep the vapor in (see Rama, YD 108:1).

Another problem can occur if the kosher utensil is placed directly on non-kosher residue. Then, the non-kosher ta’am can go straight into the utensil and from there into the kosher food. To prevent this one does not require a full wrapping, but a simple sheet of something to separate between the utensil and the possible residue suffices.

If milchig and fleishig foods are being cooked or heated at the same time, wrapping only one of them with a single wrapping is not enough. The vapors of each can reach the wrapping, thus making it at that moment, both a milchig and a fleishig utensil, which is a problem (see Rama, YD 95:3). If it is only a milchig food in an empty fleishig oven, then the situation is similar (and perhaps a little more lenient – beyond our scope) to the case of an empty treif oven.

In the case of pareve food in an oven that is also baking fleishig, it is questionable whether one covering is enough to keep the food pareve. It is no better than the level of pareve which people call “meat (or dairy) equipment,” which has certain halachot of pareve and certain halachot of fleishig. Some say it is worse because the fleishig and pareve interact within the medium of the utensil that separates them at one and the same time (Chavot Daat 95:1). If the meat oven were empty, then as mentioned before, a sufficiently effective single wrapping would certainly succeed in preventing the oven’s meat element from affecting the pareve food. Again, one must ensure that no meat residue comes in direct contact with the utensil/wrapping.