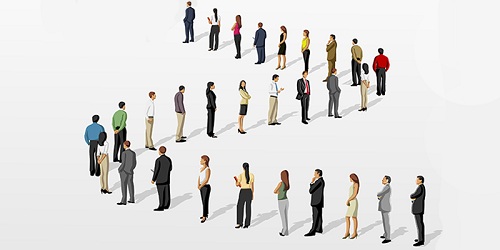 On the third of Cheshvan (called MarCheshvan in this and most responsa I’ve seen) 5749 (1988), Tzitz Eliezer 18;69 answered a series of questions from Dr. Avraham S. Avraham about lines for service in a doctor’s office. Must a doctor triage patients, or have a line? If the latter, must a Torah scholar be taken first, in this and any other kind of line?

Dr. Avraham’s assumption was that, other than emergencies, we should follow the priorities of the last two Mishnayot in Horayot, [it’s not exactly clear how we would apply them, but since Tzitz Eliezer is going to disagree with the assumption, we need not explain that fully; what is relevant here is that the Mishnah seems to make a blanket principle of giving priority to Torah scholars].

Common custom, however, is to call patients by order of arrival. Dr. Avraham could imagine the Mishnah only meant that we have to take the Torah scholar first if he arrived at the same time as others, but still is not sure what halachic right is established by order of arrival. In fact, Choshen Mishpat 15;1 seems say that  a judge should hear the case of a Torah scholar first even if that scholar came later than others.

Kohanim and Levi’im In Our Times

This question should have applied to kohanim or levi’im as well, who are also given priority in Horayot, but Magen Avraham long ago noted, Orach Chayyim 201;4, that our uncertainty about lineage [we trust their family traditions, but that’s not valid  halachic proof] means we don’t have to always extend to those classes of Jews the privileges we otherwise might.

Even so, Mishnah Berurah held we should nonetheless extend these preferences to kohanim and levi’im and R. Ya’akov Emden was unsure. So that’s not the whole solution.

How Could Ya’akov Prioritize?

Tzitz Eliezer digresses to a question of his own, which will give him the key to Dr. Avraham’s. The Torah tells us that when Ya’akov Avinu was about to meet Esav, he put the maidservants and their children first, then Leah and her childen, and Rachel and Yosef. Rashi explains that acharon, acharon chaviv, the later he put someone, the more dear they were to him [my father, a”h, used to point out that that’s only in the context of war and danger, whereas many quote it as a general rule].

Yonatan b. Uzziel says this was so that if Esav attacked, Ya’akov would have a chance to repel him before he got around to killing or sexually abusing those placed farther back. Radak’s similar idea was that Esav might exhaust  his appetites on the earlier ones, thus protecting the later ones.

Tzitz Eliezer is bothered by how this violates mTerumot 8;12, codified by Rambam and  Shulchan Aruch Yoreh De’ah 157;1. The Mishnah prohibits giving up one or some members of a group to protect the others from death or sexual abuse. The Tosefta says that’s even if they will all be killed or abused otherwise [people can volunteer for that, but the group cannot choose and give up people].

How could Ya’akov use some his family a buffer to protect the rest, asks Tzitz Eliezer? In addition, Ramban had read his conduct the previous night as being exactly the opposite. When he crossed the Yabok, Ramban said, he crossed himself to see if it was safe, and then took the whole camp across at once, so that no one would be in any greater danger than anyone else. Why change that now?

The key to his answer is that the danger with Esav wasn’t as real as the simplest reading of Yonatan b. Uzziel, Rashi and Radak would make it seem. It wasn’t yet clear Esav intended to damage Ya’akov [all he knew at this point was that Esav was coming towards him with an army], and Ya’akov certainly trusted that his prayers for salvation would be heard and accepted [there’s much to be said about Tzitz Eliezer’s certainties, since they don’t seem, at simplest reading, to fit how earlier commentators saw it; it’s not my role or intent to critique the authors of these responsa, but it is a good reminder that our assumptions are often so deeply rooted that we don’t notice how they shape our reading of texts].

The more convincing reason he feels there was no actual danger is that between the two events– the Yabok passage and meeting Esav—he defeated the “man” tradition identified as the saro shel Esav, Esav’s guardian angel. When the angel, defeated, declared Ya’akov’s name Yisrael, because he had striven with angels and people and won, he was telling Ya’akov (as Rashi says) he would overcome Esav as he had overcome Lavan.

If so, Ya’akov had reason to believe nothing untoward would happen with Esav, unless shema yigrom hachet, his continual fear that maybe he, righteous as he was, had sinned in a way that would lose him divine protection. In cases of highly unlikely danger, Tzitz Eliezer infers, we are in fact allowed to show preferences. Where there was legitimate danger, as when they had crossed the Yabok, he had no right to prefer some lives over others.

The Line as a Social Convention

Returning to Dr. Avraham’s question, he politely rejects the idea that we don’t have to treat Torah scholars differently in our time, since that is a minority opinion. Instead, he cites Shulchan Aruch’s ruling that a judge should generally hear cases in the order of appearance. Sema and Netivot HaMishpat [or Nesivos HaMishpot] limit that to where the judge has already set up court. Until he’s actually ready to hear cases, Tzitz Eliezer understands them to mean, there’s no difference between who arrived when, no halachic meaning to a line.

For doctors, that would mean that the halachic requirement to take patients in the order they arrived only starts after the doctor arrives. If there are people there before the doctor, it’s as if they all arrived at once, and s/he can treat whomsoever s/he wants. The line we make even for those earlycomers is a matter of social agreement, to avoid fighting. Various poskim have noted that such agreements are binding, even though halachah did not institute them.

Once it’s a matter of society’s rules, a doctor in private practice can make alternative rules about whom s/he takes when (because, as in many areas of life, we in our private homes or businesses can decide what counts as politeness, and aren’t completely bound by society at large).

One more relevant piece of information is that many authorities, including Rashi, Rambam, and one view of Tosafot, hold that taking Torah scholars first only applies when that scholar arrived at the same time as others, but not if we’re thinking of letting the Torah scholar circumvent the line. Beit Yosef quoted that view, but did not include it in Shulchan Aruch, for reasons unclear to Chida.

That gets us off the hook if the scholar came after the doctor. First, we’re not sure there is any longer a rule that the scholar has to be taken first (since it’s possible that that rule only is when the Torah scholar and the other person arrived at the same time). Second, some hold that Torah scholars today don’t qualify for the rights spoken of in the Talmud. Those are two independent issues, making this a sfek sfeka, allowing us to ignore that issue.

Where We Should, In Fact, Give Preference

Tzitz Eliezer does think, however, that if the Torah scholar was one of those who got there before the doctor, the doctor should see that Torah scholar first, since there’s now only one doubt, whether we treat Torah scholars in the Talmudic way. Social convention shouldn’t be allowed to outweigh our obligations to honor Torah scholars.

In addition, if the Torah scholar is a chacham muflag, extraordinarily knowledgeable and wise, and is a ba’al ma’asim, someone of exceptional good deeds, Birkei Yosef had argued that even Rashi and Rambam would have said we should treat such a person preferentially.

Tzitz Eliezer adds that this would apply to stores and to rabbis taking questions as well.

Tzitz Eliezer’s idea explains a further problem Dr. Avraham raised. Yoreh Deah 246;15 ruled that if two Torah scholars ask a question, the respondent could answer in the order he wanted; our reasoning so far should mean answering whoever asked first, and it seems unlikely they asked at the same time.

If the line only starts once the central figure—doctor, judge, storekeeper– arrives, and the general tendency for students to arrive before the teacher (part of proper respect for a teacher, Tzitz Eliezer assumes), it’s like they all came at once. The teacher’s declaring his readiness to answer questions starts the line, which means the respondent can choose, at will, among those already there.

Showing that this is more than just his own idea, Aruch HaShulchan said explicitly that a judge has to take people in the order they came. His right to answer in the order he wants is when they came at the same time, says the Aruch HaShulchan, which sounds like it would happen only infrequently. Tzitz Eliezer has offered a way for it to happen more commonly, since it includes all those who came before the teacher or respondent.

In sum, then, Tzitz Eliezer has argued for two kinds of lines: those that form once a process has started, which is an halachic reality, and the social convention of a line that forms before the person at the center of the process arrives. That latter kind of line can be overridden, as in the situations Tzitz Eliezer laid out for us in this responsum.