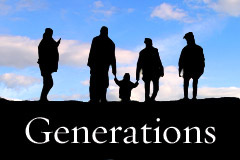 The account of how the generations of the Flood began their institutional depravity begins, וַיְהִי כִּי-הֵחֵל הָאָדָם, לָרֹב עַל-פְּנֵי הָאֲדָמָה, which uses similar language to the beginning of the account given for the previous generation’s fall into idolatry (אָז הוּחַל, לִקְרֹא בְּשֵׁם ה’), [1]Genesis 4:26 the beginning of the account of Nimrod’s rise to power (הוּא הֵחֵל, לִהְיוֹת גִּבֹּר בָּאָרֶץ), [2]Genesis 10:8 and God’s statement about the beginning of the building of the Tower of Babel (וְזֶה, הַחִלָּם לַעֲשׂוֹת). [3]Genesis 11:6  In each of these passages, the word, ה(ו)חל, has a double connotation, speaking not only of a beginning but also implying that there was a challenge to the existing socio-political system and the values inherent therein.  This challenge, however, was made in such a way that those who were not in power could not recognize it until after-the-fact.  By relating the word ה(ו)חל (begin) to the word חלום (dream), Rabbi Levi provides an illustrative comparison, “This may be compared to a woman who said to her husband, ‘I saw you in a dream divorcing me,’ to which he responded, ‘Why only in a dream? Here it is in actual fact.’” [4]Genesis Rabba 23:7.  The double entendre for the word ה(ו)חל to mean “begin” and  “make profane” is emphasized in the cantillation marks with a disjunctive between the first part of the compound verb and the second, except in the phrase הַחִלָּם לַעֲשׂוֹת which doesn’t designate a specific activity.

The difference between the passage about the generations of Noach and those about Nimrod and Enosh, however, is that in the former the challenge seems to come from the populace and not from the leadership, as it states וַיְהִי כִּי-הֵחֵל הָאָדָם. [5]The benei HaAdam built the Tower of Babel, and the story has no explicit class distinctions, though the commentators infer that Nimrod led the charge.  The description of a horizontal class … Continue reading  Nimrod’s rise to power was self-motivated and based on Nimrod’s ability to persuade people to follow him; he was a mighty hunter before Hashem. [6]Genesis 10:9.  This is based on Genesis Rabba 37:2 and Rashi’s understanding of the expression.  Rabbi Abraham ibn Ezra explains that though Nimrod rebelled against God, his strategy was first to seem pious and only then to be outright rebellious.  As such, he would trap people into thinking that he intended to better society, when in truth he desired to take advantage of the masses for his own benefit.  Rabbi Samson Raphael Hirsch explains, “Nowhere does לפני ה’ denote anything done against God’s will. On the contrary, it always refers to something done by which God’s will is fulfilled…Here too, Nimrod was a גבור ציד לפני ה’; he upheld ‘religion’ and acted ‘in the name of God’ – and yet this marks the height of depravity in the account of Nimrod.” [7]Samson Raphael, Hirsch, The Hirsch Chumash: Sefer Bereshis, trans. Daniel Haberman (Jerusalem: Feldheim, 2000) 257.  By demanding that his authority was in fulfillment of God’s will, Nimrod misled the people in order to oppress them.

Similarly, in the generation of Enosh, idolatry did not arise as a direct challenge to God.  At first, it arose through the erroneous teachings of the leadership that it would give greater honor to God and His creations.   As Maimonides explains, Enosh and the wise men of the generation proposed to praise and glorify the stars and spheres, which they perceived to control the world, and to treat them with honor as an expression of honor to God. Eventually, false prophets used this incorrect theology control the populace by commanding the people to act in the name of false deities. [8]Hilkhot Avodat Kokhavim 1:1-2.  The people were led astray by the leadership who took advantage of their loyalty.

In the generations of Noach, the language וַיְהִי כִּי-הֵחֵל הָאָדָם may reflect a situation where the challenge to existing norms and the rise of injustice arose as a response to a situation rather than as a premeditated strategy instituted by the leadership.  With the increase of the female population, strong men began to take advantage of their strength to act upon their lustful wishes.  That the increase in the female population was the impetus to social strife is demonstrated in a discussion between Rabbi Yochanan and Reish Lakish on the meaning of לָרֹב עַל-פְּנֵי הָאֲדָמָה; וּבָנוֹת, יֻלְּדוּ לָהֶם.  Rabbi Yochanan interprets the verb simply to mean that population increased; Reish Lakish, on the other hand, contends that the word also connotes strife (מריבה). [9]BT Bava Batra 16b  The Nephilim (הַנְּפִלִים) were the first to use their physical stature to demand political dominance, they were recognized to be physically superior (הַגִּבֹּרִים) than the rest of mankind. [10]Genesis Rabba 26:7 – Nefilim denotes that they hurled (hippilu) the world down, themselves fell (naflu) from the world, and filled the world with abortions (nefilim) through their immorality.  They were called Nephilim to give the connotation both that they fell from their high moral standing and caused the world to fall with them. [11]Rashi  This started in the days of Enosh, yet humanity continued its downward trajectory, moving from theological distancing to political subjugation.  בְּנֵי הָאֱלֹהִים are the ruling elite, men of renown (אַנְשֵׁי הַשֵּׁם) who claimed to rule in the name of God.

Acting on these lustful desires were first justified and then promoted as beneficial to society. The taking of the female population may have begun through the acceptance of polygamy, since the word ויקח is commonly used with reference to marriage. [12]BT Kiddushin 4b Maimonides explains that before the Torah was given, when a man would meet a woman in the marketplace and he and she decided to marry, he would bring her home, conduct relations in private and thus make her his wife. [13]Hilkhot Ishut 1:1.  The leaders of the generation might have proposed that polygamy would benefit women who could be given security and sustenance as additional wives to powerful men.  It is conceivable that the account of Lamech, the descendant of Kayin, and his two wives is meant to show how polygamy was instituted as a social norm for the powerful, though its ultimate purpose was neither to improve the lot of women nor to increase the population, but to satisfy men’s desires. [14]Genesis 4:19-24

The ruling class then simply created unjust policies set for the purpose of fulfilling personal desires, without any justification of social benefit. [15]Genesis Rabba 26:5 – That they were fair (toboth). R. Judan said: Actually toboth is written : when a bride was made beautiful for her husband, the chief [of these nobles] entered and enjoyed her … Continue reading   Eventually, they created a culture of rape and sexual assault, without concern of whether women were already married or not.  Ultimately, anything and everything was seen as a means for fulfilling one’s sexual desires, [16]Sifri Bemidbar, Parshat Behaalotecha 86, ki beara; Tanhuma, Bereshit 33.  The way the verse is understood is that וַיִּקְחוּ לָהֶם first applies to נָשִׁים and then applies to … Continue reading yet the façade of legality was still maintained for the purpose of justifying moral impropriety. [17]Genesis Rabba 26:5 – R. Huna said in R. Joseph’s name: The generation of the Flood was not blotted out from the world until they composed nuptial songs/deeds in honor of pederasty … Continue reading  Once people were seen as merely objects to be plundered, the natural consequence was increased legalized violence and theft (וַתִּמָּלֵא הָאָרֶץ, חָמָס), [18]Genesis Rabba 31:5 – What is hamas and what is gezel? Said Rabbi Hanina: Hamas refers to what is worth a perutah; gezel, to what is of less value than a perutah. And this is what the people of … Continue reading which allowed for greater objectification and was reinforced as an institutional ethos. [19]See BT Sanhedrin 108a – Rabbi Yohanan said: Come and see how great is the power of robbery, for lo, though the generation of the flood transgressed all laws, their decree of punishment was … Continue reading

Though using their intellect to justify their actions, the people demonstrated that in essence the primary motivation had become satisfaction of the flesh.  The spirit of God no longer was present in their consciousness.  This is demonstrated in God’s declaration, לֹא-יָדוֹן רוּחִי בָאָדָם לְעֹלָם, בְּשַׁגַּם, הוּא בָשָׂר; since neither God’s teachings nor His spirit was part of humanity’s consciousness, [20]The relationship between engaging in sexual immorality and justifying it through idolatry is seen in the interpretation of the Sages of the verse, וַתִּשָּׁחֵת הָאָרֶץ, … Continue reading  they were considered merely as flesh and thus would not be judged at the end of days nor have a portion in the World to Come. [21]BT Sanhedrin 107b.  Genesis Rabba 26:6.  It also expressed in the indirect characterization of the בְּנֵי הָאֱלֹהִים, indicated by how they perceived the women around them.  The בְּנֵי הָאֱלֹהִים perceived that the female population could satisfy their physical needs, [22]The word ראיה, when used in context of seeing another person typically connotes sexual desire.  See Genesis 12:12-15, 34:2; Leviticus 20:17; Esther 2:7.  without giving any thought to the appropriateness of their acquisition or what would be best, either for themselves or for society as a whole. [23]Though the Sages understand that even animals and plants crossed species lines to reproduce, punishment was meted out on the entire world solely because of the moral culpability of humanity.  This … Continue reading

The wickedness of the generations multiplied(רַבָּה רָעַת)  as a consequence of continuous moral failure which comes when humanity loses its relationship with God. [24]BT Sukkah 52a-b. – R. Isaac stated, The [Evil] Inclination of a man grows stronger within him from day to day, as it is said, Only evil all the day. R. Simeon b. Lakish stated, The Evil Inclination … Continue reading  רַע is a type of evil that comes when one’s moral resolve is broken.  Like a broken note (תרועה), it signifies the lack of strength to maintain or uphold a given expectation or norm.  This type of evil is different from רשעות, which occurs when one identifies with the evil that one does.  By continuing to seek legal justification for their increasing injustice, the political leadership increased their defense against the claim that wanton oppression is wrong.  As such, their legalization of injustice revealed that even their ratiocinations (כָל-יֵצֶר מַחְשְׁבֹת לִבּוֹ) were moral corruptions, since they not only acted against what they knew was right but even started to believe their own excuses.