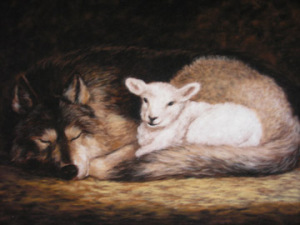 How Close Are We To Rambam’s Yemot HaMashiach?

Welcome to a new series for Torah Musings, discussing views of the Messianic era in Jewish thought. I don’t intend to be comprehensive; rather, by comparing Rambam’s view (which we can cover in one week), some of what Abarbanel had to say about that time (another week), and moving on to an extended engagement with Maharal’s ideas, I think and hope that we will get some sense of the possibilities for what Jews are meant to expect and long for in the future.

Since Rambam is famously rationalist, and came first, let’s look at how he described it. One of the striking aspects of his picture, to me, is the extent to which parts of it have already come to fruition, in ways that might have seemed hopelessly utopian or naïve just a century ago.

We’ll start with his Mishnah commentary, the earlier of the works where he describes this time at some length.

Introduction to Chelek, a Powerful and Remarkable King Messiah

One of the later chapters of Sanhedrin (the last in the Gemara, second to last in the Mishnah) opens with a list of those who forfeit their share in the World to Come. In an introduction t famous for many reasons (and which amply rewards careful study and repeat readings), Rambam explains some concepts that seem blurrily similar, such as the Messianic era, Resurrection of the Dead, and the World to Come.

The days of the Messiah, he says, are when a Jewish king will again rule the Jewish people, and they will return to the Land of Israel. [He seems to imply that malchut, kingship, will return before all the Jews. Especially considering that important rabbis of the early State suggested that a Jewish government qualifies as malchut without melech, rule without a king, and that this happened long before several waves of immigration that we’ve already seen—Yemenite, Ethiopian, Russian—this part of Rambam’s words seem to be coming true before our eyes].

This king will rule from Zion, and his fame will be more widespread than Shlomo HaMelech’s. All nations will make peace with him, serving him because of his great righteousness [notice the ideal being expressed—they won’t serve him for political or strategic expedience, they will respect his righteousness]. Hashem will destroy anyone who does stand against him, giving them into this king’s hands.

Messiah Is Not the End, in Either Sense

Other than that, the world will continue. There will be strong and weak, but productivity gains will make earning a living significantly easier [this is again a remarkable prediction, in that basic necessities are today much easier to produce than in Rambam’s time; people work hard today, but that’s because they want much more than was seen as necessary back then. To live at Rambam’s standard of living today takes almost insignificant amounts of money].

The greatest benefit of that time, Rambam says, is that evil kingdoms that stop us from doing what’s right will no longer exist. The world will improve, everyone will have greater knowledge, wars will end, and people will achieve their maximum perfection.

That will be a continuing process, however. Mashiach will rule a long time, then die, and his son and grandson and descendants will rule in their turn [he implies that perfection is a goal never fully achieved, so that people can spend many generations working on it, even in a world where no one is evil, and material wealth is easily achieved].

People will live longer [as we do today], because they won’t have worries or troubles [there is evidence for Rambam’s certainty that stress is a significant contributing factor to disease and death. Were stress really to be erased by plenty and righteousness, it’s more than reasonable that lifespans would increase more than we today imagine.]

The reason to long for this time is that it will afford the fullest opportunity to maximize our potential, to grow to our greatest knowledge of Torah and our Creator, thus earning ourselves the best place we can achieve in the World to Come.

That’s as far as he goes in the introduction to Chelek. He takes up these themes twice in Mishneh Torah, however, enriching our sense of his view of the Messianic era.

Hilchot Teshuvah: Messianic Times as a Time of Perfect Repentance

The first of those is in the later parts of Laws of Repentance. Towards the end of the eighth chapter, he contrasts yemot haMashiach, Messianic times, with the World to Come. The latter is unknowable (for all that our tradition longs for it), but yemot haMashiach has been predicted by the prophets, in a way that presents a bit of a challenge for his view of the goal of observance, knowledge of Hashem.

If that’s true, he opens the ninth chapter by asking, how come the Torah and prophets promised material rewards for proper observance? He answers that they’re a means to an end, giving us the wherewithal, peace of mind, physical health, financial security, and political and military independence to build our readiness for the World to Come (or, if we don’t keep the Torah and receive the threatened punishments, they make the end of achieving the World to Come more difficult to achieve; that’s part of the punishment).

The Messiah will be the king who leads us to take full advantage of these promises, to act in ways that they are completely fulfilled, giving us the best chance to be our best selves, a prophet almost like Moshe, as wise as Shlomo.

That aspect of Mashiach came up in a discussion of repentance because Rambam had to explain how physical rewards fit into his view of the results of our acting properly. But since the central figure of that time is a king, the Laws of Kings returns to discuss the king Mashiach as well.

There, in the eleventh chapter, Rambam repeats his view that there will be little supernatural, that he will restore Davidic kingship [I recently started studying Tzitz Eliezer’s remarkable Hilchot Medinah, Laws of a State, a book he published in 5712/1952; there, he notes sources that suggest that Davidic kingship might return before Mashiach, and also that Rambam in a letter to the Jews of Yemen seemed to think Mashiach would perform miracles. Here, Rambam clearly does not; Tzitz Eliezer assumes he changed his mind].

Mashiach will also restore observance of all the Torah, including the offering of sacrifices [I see Rambam’s including this example as strong evidence he was sincere about his belief in the return of sacrifice. While some read him as seeing no continuing value in sacrifices, there is no reason for him to mention it here unless he really thought it would happen.]

Another example he gives is that arei miklat, cities of refuge, will be set up again, since the Torah speaks of there one day being nine such cities, which has not yet happened. [This is a Rambam close to my heart because it provided a key plot point to my novel, Murderer in the Mikdash. I also note that the existence of cities of refuge implies there will be both intentional and nonintentional murder.]

Here, Rambam also gives us a way to identify Mashiach, since he does not believe he will reveal himself by performing miracles. Rather, if a Davidic king arises, who studies and is invested in Torah, occupies himself with mitzvot like his forefather David, and brings the Jews to observance [Rambam writes ve-yachuf, which most simply means “coerces.” But there’s more than one way to skin a cat, and I can imagine a king “coercing” observance gently and subtly as well], he will be the presumptive Mashiach.

If he then succeeds at rebuilding the Beit HaMikdash, and gathering the scattered Jewish people, he will be Mashiach for sure [note his comfort with Mashiach arriving without our recognizing it, and not being confirmed as Mashiach until much later in his career, after he’s rebuilt the Temple and finally ingathered the exiles].

The Unknowns of the Arrival

In 12;2 of Laws of Kings, he says the simple reading of Tanach is that there will be a big war before Mashiach comes, as well as a prophet arising who will return the people to Hashem and bring peace to the world [in this version, it’s the prophet, identified in Tanach as Eliyahu but Rambam is not adamant that it must be him, who brings peace, not Mashiach].

All these issues won’t be fully known until they come to fruition, because Tanach is unclear about the details and we have no tradition about it. But it doesn’t matter, he says, because the specifics are not essential to observance, nor do they bring us to fear or love of Hashem (the real goals). Rather, people shouldn’t spend too much time trying to unravel these aggadic issues, but wait believingly for it to unfold [in our times, we might say people can contribute to its unfolding in some ways, even if we don’t know the path the future will take].

One function Mashiach will perform is establishing lineage, using the divine spirit within him to identify kohanim and Levi’im, as well as those who are not, who will become regular Jews. He’ll also identify the tribes, but will not “out” mamzerim or slaves who have mixed in to the Jewish people. [Rambam speaks of ruach hakodesh, and he does expect Mashiach to be a prophet, but it still seems odd that Eliyahu could not do this prophetically and Mashiach could. I wonder whether “divine spirit” here might mean something more natural looking, such as his finding a way to identify lineage that, once discovered, seems natural. Like a genetic marker.].

He closes with another reminder that the goal of all this is the opportunity, environment, and inclination to work on our service of Hashem, to improve ourselves as much as possible.

Rambam’s Mashiach and Messianic era is naturalistic and rationalistic, as we expected going in. But it’s not devoid of the supernatural. He expects Mashiach to be a prophet, and is comfortable with another prophet preceding the Arrival, even that that prophet could be Eliyahu.

It will be a time of a fully restored Jewish halachic state, with all the laws of the Torah in place (eventually), life spans extended, and the world as a whole joining in the great project of finding their way to better and better service of God. Certainly an attractive model, much of which it seems to me we have already merited. But it’s not the final word, as we plan to see in the weeks to come.