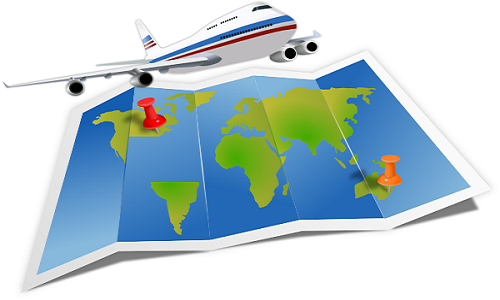 Although it is not widely known, there is a view among halachic authorities that Tefillat Haderech is not recited for airplane travel. [1]See Ahalech B’amitecha 9, n. 7; Sha’arei Halacha U’minhag 1:118; Piskei Teshuvot 110, n. 16. This is based on the Talmudic teaching that air travel is something associated exclusively with birds and not with people. [2]Chullin139b. According to this approach, the reason Tefillat Haderech is not recited when flying on an airplane is because air travel is simply not considered to be a form of “derech.” [3]Ateret Paz, OC 10 n. 7. Needless to say, the halacha is not in accordance with this view, and Tefillat Haderech must be recited when traveling on an airplane. [4]Rivevot Ephraim 5:174:4; Be’er Moshe 7:114; Yechave Da’at 2:26. In any event, this issue is often irrelevant since most airports are located outside of city limits and, therefore, one would be required to recite Tefillat Haderech on the way to the airport anyway. The Tefillat Haderech recited on the way to the airport covers one’s flight, as well.

When reciting Tefillat Haderech on an airplane, one should stand, whenever possible. [5]Be’er Moshe 7:114; OC 110:4. Some authorities rule, however, that Tefillat Haderech should be recited while the airplane is taxiing down the runway in preparation for takeoff (a time when one obviously may not stand due to airline safety regulations). [6]Rivevot V’yovlot 2:102; Emet L’Yaakov, OC 110 n. 139; Halichot Shlomo 1:21. If Tefillat Haderech was not recited any time earlier, it may be recited after takeoff or at any time one remembers during the flight, up until the final descent.

There are a number of additional prayers that were composed specifically for air travel, one of them composed by the late Rebbe of Gur. [7]Be’er Moshe, Kuntres Electric 7:83. These texts, however, are in very limited circulation and were not enthusiastically received. [8]Rivevot V’yovlot 2:102.

Tefillat Haderech is only recited once per flight, even if one’s flight extends into a new day or time zone. Nevertheless, one may recite it again as part of shema koleinu in any Shemoneh Esrei that one recites in the course of the flight, should one wish to do so. [9]Mishna Berura 110:24; Halichot Shlomo 1:21. It is noted that Rav Yosef Dov Soloveitchik would not recite Tefillat Haderech during his frequent road and air trips between Boston and New York. He was of the opinion that Tefillat Haderech is only to be recited on journeys that may arouse some fear or hesitation – not for a routine commute. [10]Cited in Nefesh Harav.

One who flies over a place where a miracle occurred, either to one personally or to the Jewish nation as a whole, is permitted to recite the Birkat Haness when seeing this place from the window of an airplane. [11]Piskei Teshuvot 218, n. 20. So too, one may recite the Birkat Hachama, the blessing recited upon the sun every twenty-eight years when it returns to the position that it was in when it was first created, should one be flying at that time. [12]Rivevot Ephraim 4:54:9.

Although as a general rule one should not eat in public places [13]Kiddushin 41b. in order not to offend anyone who may be sensitive to the sight or smells of certain foods, [14]Beit Yechezkel, Kedushat Hapeh V’ha’achila, p.171. it is completely acceptable to eat on an airplane. [15]Yosef Da’at, OC 42:5. When reciting Birkat Hamazon on a plane, one should say “Harachaman Hu yishlach lanu beracha meruba b’halichateinu u’b’yeshivateinu ad olam” (May the Merciful One send us abundant blessing in our travels and our encampments forever) in place of the usual “Harachaman Hu yishlach lanu beracha meruba ba’bayit hazeh” (May the Merciful One send us abundant blessing in this house), as this wording better reflects the circumstances. [16]Ahalech B’amitecha 11:25. See also Mishna Berura 193:27. Some authorities rule that the usual passage should simply be omitted rather than altered. Others rule that no changes should be made at all, and that one should recite the usual text.

One who travels eastward on a fast day may break one’s fast at nightfall even though one’s fast is shortened considerably. [17]Teshuvot Radbaz 1:76; Yabia Omer 10:42; Chavatzelet Hasharon 1:47; Moadei Yeshurun, p. 109. There is some discussion, however, as to when westbound travelers are permitted to break their fast. Most authorities rule that the fast may only be broken once nightfall arrives in one’s current location. There are also those who allow one to break the fast at an hour comparable to when it would have ended at one’s point of departure. A rabbi must be consulted. [18]Shevet Halevi 7:76. See also Rabbi Chaim Jachter, “Air Travel on a Fast Day – Part 2,” Rabbi Jachter’s Halacha Files, http://www.koltorah.org/ravj/Air_Travel_on_a_Fast_Day_-_Part_Two_2.html.

Despite the common practice of arranging a minyan during the flight, one should not make a minyan on an airplane (nor should one even stand for prayer, including the Shemoneh Esrei) if doing so will interfere with the stewards or the comfort of other passengers. [19]Halichot Shlomo 8:4, n. 12. See also Rabbi Hershel Schachter, “Davening on Airplanes,” www.torahweb.org/torah/special/2010/rsch_airplanes.html. In fact, Rabbi Chaim Pinchas Sheinberg ruled that if arranging a minyan or even getting up to get one’s tallit and tefillin would awaken other passengers, then one should simply stay in one’s seat and forgo doing either. [20]Kuntres U’v’lechtecha Ba’derech 5:7, n. 56, cited in Jason Weiner, “Praying with a Minyan on an Airplane,” Journal of Halacha and Contemporary Society 56 (2008): 49–60. One who finds it difficult to properly focus on prayers when standing on an airplane may recite them while seated. [21]Igrot Moshe, OC 4:20. See also Sefer Chassidim 18. One recites the blessing “roka ha’aretz al hamayim” as usual when praying on an airplane even though one is not on solid ground. [22]Rivevot Ephraim 3:47:3. As a general rule when flying, one should follow prayer deadlines, such as the deadline for reciting Shema each morning, as if one were on the ground. However, one who wishes to recite Shacharit k’vatikin should perhaps do so upon seeing the sun from the airplane window and not necessarily when those on the ground would see it. [23]Igrot Moshe 3:96; Teshuvot V’hanhagot 4:25. One who crosses the international dateline need not repeat the same prayers that were recently recited on the same flight. [24]For a complete discussion of this issue see Piskei Teshuvot 58:4.

Netilat yadayim, washing one’s hands before eating bread, is always a challenge when flying. In most situations, one has no choice but to wash in the lavatory. This is also often the case at an airport and other locations where facilities for proper pre-meal washing simply do not exist. In such situations, there are a number of possible ways to proceed. If one must use a bathroom for netilat yadayim, it is preferable to fill one’s washing cup in the bathroom, but to wash one’s hands outside the bathroom. [25]Mishna Berura 160:54; Chazon Ish, OC 24:26; Igrot Moshe, EH 1:114. When even this is not possible, one may wash one’s hands in a bathroom and then quickly exit the bathroom in order to recite the blessing. [26]Eretz Tzvi 110–11; Zekan Aharon 1:1; Minchat Yitzchak 1:60, 4:36; Piskei Teshuvot 160, n. 74, 75.

One should board an airplane with one’s right foot first. [27]Kaf Hachaim, OC 110:32. It is best not to store food under one’s seat on an airplane, but if need be one may do so, as sleeping is not the primary use of the seat. [28]Kaf Hachaim, YD 116:43. One is forbidden to travel in an airplane on Shabbat even if one boards the plane before Shabbat begins and disembarks only after Shabbat has ended. This is true even if none of the personnel operating the flight are Jewish. [29]Daber Davar 11:15. One who boards a flight on Motzaei Shabbat that lands at its destination while it is still Shabbat in that place is forbidden to perform any melacha until Shabbat ends in that place. However, one will not be required to recite Havdala again when Shabbat ends there. [30]Rivevot Ephraim 2:115:71. While most authorities rule that the hagomel blessing is only recited following overseas air travel, there is also a view that it should be recited following any form of air travel. [31]Igrot Moshe, OC 2:59; Be’er Moshe, Kuntres Electric 7:83; Yabia Omer 2:14; Halichot Shlomo, p. 276; Rivevot V’yovlot 2:103; Devar Chevron 2:199. See also Or L’tzion 2:14:43; Teshuvot … Continue reading