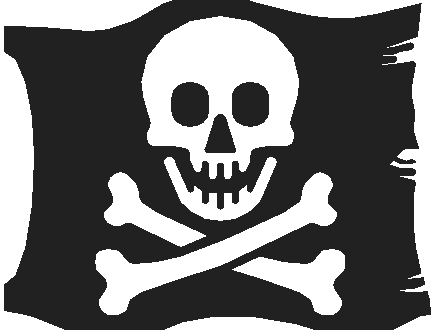 A Nation of Pirates

This essay is excerpted from Rabbi Nataf’s forthcoming Redeeming Relevance in the Book of Deuteronomy: Explorations in Text and Meaning.

From the text it is not so clear why such harsh treatment is reserved uniquely for Amalek. [1]See Ramban, Shemot 17:16. Why is this nation considered worse than the Egyptians, who afflicted the Jews for hundreds of years, or even the Moabites, who used all sorts of machinations to destroy the Jews when they crossed the desert? The fact that quite a few answers are given demonstrates that there is no single, obvious answer. [2]A good summary of the reasons generally given can be found in Abarbanel, op. cit.

The commandment in the book of Devarim to remember what Amalek did to the Jews gives some explanation as to what was most objectionable about that nation’s behavior. The key verse tells us that Amalek “came (or chanced) upon you (the Israelites) in the desert and cut off your tail (vayizanev) – all of those who were struggling after you, and you were tired and exhausted – and did not fear God.” [3]Devarim 25:18. It is not clear whether the last part of the verse: “and did not fear God,” is speaking about Amalek or about the Jewish stragglers, though the former would make more sense in … Continue reading Commentators struggle with this verse for many reasons, not the least of which is that it is difficult to ascertain which part gives us the explanation we are looking for. Nor are all of its components clear in their own right.

The most intuitive issue presented by the Torah is that Amalek picked on those struggling to keep up with the march of the Jewish camp. For our purposes, we will assume that this is, in fact, the reason for our enmity. While the Torah’s own laws of war [4]See Rambam, Mishneh Torah, Hilchot Melachim 6. See also Lawrence Schiffman and Joel B. Wolowelsky (eds.), War and Peace in the Jewish Tradition (New York: Yeshiva University Press, 2007), especially … Continue reading don’t expressly forbid attacks on stragglers, it may be a case of something so obvious that the Torah did not feel the need to mandate it. [5]Rabbi S.D. Luzzatto, Vayikra 24:10, gives this as the reason why blasphemy was not legislated until it was committed for the first time. Moreover, the Torah makes provisions for non-combatants to escape. [6]Rambam, op. cit., 7. But even if all of the above is true, why is attacking the enemy’s weak elements so despicable that it warrants eternal enmity? It appears that the answer to that is in the last part of the verse: “and [they] did not fear God.”

Attacking the helpless does not always come from the base immorality of those who don’t fear God. Sometimes it is the only survival strategy of the weak, of those who simply don’t have the power to engage more powerful opponents head-on. The Torah tells us this was not the case with Amalek, who were so strong that the Israelites required great effort to defeat them. [7]Shemot 17:11–13. Accordingly, some understand the description of Amalek in Bemidbar 24:20 as the “first among nations” as referring to their formidable military prowess. Their decision to prey on the weak, then could have come only from a rank insouciance about the rules of fair play implicit in living in God’s world. Perhaps we can understand, if not necessarily forgive, attacking the helpless as the last-ditch strategy of a weak nation. It is quite another thing, however, when it becomes standard operating procedure, as it apparently was with Amalek. That could only come from the absence of fear of God.

Indeed, the nation of Amalek would become known as the area’s marauders. [8]See I Shmuel 30:1–3 and its treatment by Rabbi Ya’akov Medan, “Amalek” (http://etzion.org.il/en/amalek), section C. They were not a military nation in the sense of ancient Sparta, interested in valiant acts of conquest. As we see from the book of Shmuel, theirs was a culture of finding the easiest way to acquire booty. They searched for vacuums of power and law enforcement which would enable them to help themselves to the possessions of others. In such a situation, the more ruthless one is, the more successful he is as well, because the greatest limit on the activity of such people is their own conscience.

The Torah wants us to understand that Amalek’s pirate-like existence did not emerge as a fluke, but rather was deeply rooted in their approach to life more generally, i.e., in what the Torah calls “not fearing God.” On the face of it this is a strange claim, for which pagan nations of the time could actually be described as God-fearing? And yet Amalek is the only one the Torah singles out as not fearing God. It is important to note that from among the few times the concept is mentioned in this form is when Avraham says Avimelech’s country was devoid of the fear of God [9]Bereshit 20:11. and when Yosef, posing as an Egyptian, reassures his brothers that he fears God. [10]Ibid., 42:18. As these references are dealing with non-Jews, it appears that even if almost all of the nations of the time were idolatrous, there was nevertheless an expectation that they should be – and, in fact, often were – “God-fearing.”

The word for God used in all three instances discussed above is the generic one connoting both power and the notion of God as the universal Creator and ruler of the natural world. Fearing God, then, could more generally be thought of as fearing higher powers, and thus not necessarily presuppose monotheism. Instead, it is an attitude that comes from acknowledging something greater than men and their nations, something that by its very transcendence informs the human condition. That power (or powers) has a unique connection to human beings and therefore demands, whether explicitly or implicitly, a modicum of respect for other people who share this condition. We may want to refer to it as awe – a generic awe that leads to a certain basic decency. Certainly in the cases we have noted such an idea fits much better than the theologically charged notion that we usually associate with the fear of God.

When the Torah tells us that the nation of Amalek did not fear God, it is saying that they were unrestrained by any concept of a higher power and thus possessed an unusual lack of common decency. They were the most extreme manifestation of this attitude. Their pirate-like behavior reflects a lack of respect for man’s uniqueness and ultimately for the power that stands behind it. No wonder, then, that the Jews are commanded to blot out Amalek. They represent an antithesis to the Jewish nation’s mission in the world, and their approach to life presents a formidable obstacle to the Jewish people’s goal of establishing a kingdom of God on earth.

The fight against Amalek does not end when the nation is destroyed, for even when it would be defeated its legacy would likely remain. As long as greed exists in the human heart, there will always be a need to fight against the temptation to view others as mere objects standing in the way of one’s advancement. [11]This is one of the main themes in Crime and Punishment, by the Russian Christian writer Fyodor Dostoyevsky. The eternal struggle against Amalek is how Judaism formalizes this need. [12]While Netziv (Ha’amek Davar, Shemot 17:14) presents a different approach, he also posits that it is not the nation of Amalek that we need to perpetually blot out but rather their attitude and … Continue reading