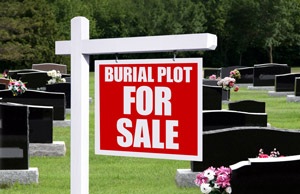 About six weeks ago, we saw another responsum of R. Moshe Feinstein’s on exhuming a body. I[m coming to realize that in looking for a responsum written on each possible day of the Jewish calendar, I have to make a conscious effort to avoid defaulting to one of R. Moshe Feinstein’s; he was so prolific, so careul about dating his responsa, and wrote so clearly, that most of the times I check for a responsum from a certain date, I find one of his that fits well. I believe I could easily fill a book with responsa of his, one for each day of the calendar.

One of the reasons this one makes the cut is that, aside from the burial issues, it raises another broad question I find very interesting—when halachah disregards a person’s wishes because they are seen as unreasonable or unimportant.

The Edge of the Cemetery

Iggerot Moshe Yoreh De’ah 1;242, 24 Tammuz, 5713 (1953), tells of a woman buried in her family’s plot, next to the cemetery’s fence. Months later, family members—including her widower, which will be an important detail–remembered her having mentioned several times that she didn’t want to be buried at the edge of the cemetery. They wanted to move her remains.

R. Feinstein’s first step is to point out that her dislike of the edge, her preference for the middle, has no halachic support. If anything, the opposite is true, since kohanim want to be buried at the edges of cemeteries, so the relatives burying them not have to pass by or on other graves on their way. [It also makes it easier for those relatives to visit that grave in the future].

Her having misunderstood the relative value of the two kinds of plots creates an anan sahadei, a clear presumption, that she’d have retracted her opposition once we explained the truth. That’s especially true for R. Feinstein, who doubted she had ever stated this preference, as we’ll see.

Had she insisted anyway, R. Moshe thinks we would not have listened. Moving a body requires both that the deceased asked for it to happen and that there’s an halachically valid reason to do it. The clearest example of a request we ignore is if the deceased asked not to be buried. Rambam and Shulchan Aruch (Yoreh De’ah 348; 3) are clear that we don’t pay attention to that.

Kessef Mishneh (who was also the author of Shulchan Aruch) explains that Rambam held that burial might be a Torah obligation, in which case we certainly wouldn’t accede; if not, it’s still a bizayon, disrespectful, to all of humanity to treat a deceased body that way. It’s not in the power or rights of the deceased, even if joined by all the heirs, to call for that kind of disrespect.

That’s for not burying at all. Moving a body, R. Feinstein says, is similar, in that there’s nivul ha-met, mistreatment of the deceased. Just opening the grave has some nivul, and also cherdat hadin, fear of judgment [tradition had it that the person interred would worry that the opening of the grave meant s/he was being called to final judgment before the Heavenly Court; to inspire the fear involved in that, needlessly, is a problem].

Later in the responsum, he says that opening a grave renews the obligation to bury. Since it’s like unburying a person, we cannot do it without good reason. Nor does the fact that we plan to quickly rebury help; it’s a mistreatment of the deceased and, by extension, of all humanity.

When We Do Move a Body

We allow moving a body, R. Feinstein thinks, when the new place is demonstrably better than the old one, either because of the surrounding graves (the “neighbors,” as it were—it’s ok to move someone to be buried near important people and/or relatives) or the place itself (like Israel). It’s easier to do that if the deceased was buried with the intent to move the body.

To transport a body long distances, for example, it was easier to let it decompose (some sources allow hastening that process with lye), and then move it. In that case, we’d even allow taking it to a place that was only equally respectable, since the first burial was avowedly temporary.

Without the declared intent to move the deceased, we would only permit it if the new place has some advantage over the old one.

Adding to our reasons to reject this request, Lechem Mishneh noted that when Rambam required burying even someone who explicitly asked not to be, he said it was a mitzvah to bury. The issue of mistreating bodies, Lechem Mishneh said, only matters for those who don’t see a Biblical obligation to bury. Once there is such an obligation, as Rambam held, it’s obvious we wouldn’t listen to someone’s request that we violate the Torah by leaving him/her unburied.

People can decide to forego certain Rabbinic ordinances made for their benefit [for example, a woman can decide she wants to keep her salary and forego financial support from her husband, since Chazal instituted that trade for her benefit], but not Biblical ones. Even if we felt sure the Torah required burial as a matter of treating the deceased with respect—and it’s always a delicate matter to assume we know the reason for Biblical obligations, R. Feinstein says— that doesn’t allow us to make different choices than the Torah’s.

Did She Really Say It?

To me, the most fascinating part comes now. We’ve assumed the family accurately reported the woman’s stated wishes, that she had in fact said, while alive, that she didn’t want to be buried at the edge of a cemetery. R. Feinstein now explains why he doubts that.

It’s strange that a woman with such clear feelings ended up buried at the edge of the cemetery, since this family owned two or three rows of graves; why wouldn’t they have buried her in the third row in? Nor did they notice their error right away–it was more than two months later. To say they all forgot for that long seems unlikely to him, especially since the Gemara says that people facing a moment of obligation pay closer attention, not less close.

He has an alternate theory—the widower, advanced in age and mourning his wife, came to believe she had said she didn’t want to be buried there. His children were agreeing as a way of supporting him, helping him feel better, not because they remembered that. In that situation, there’s even less reason to relocate the grave [he doesn’t say, but obviously the man’s grief should be addressed].

The widower was also bothered by dog house on the other side of the fence. R. Feinstein says it would be cheaper to persuade the owner to move the dog house than the body.

Sum total: Had she said she wanted to be buried in the middle of the cemetery, and then somehow ended up at the edge, that’s not a good enough reason to allow disinterment. All the more so if there’s reason to suspect that this whole request was an expression of the widower’s grief, not of events as they occurred. She should stay where she was, an appropriate and honorable gravesite.

Ki Tissa: Gd in the Background, To Allow People to Do Well (or Not) 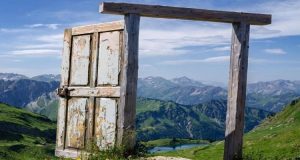 Attaching a Mezuza to a Door Leading to Nowhere