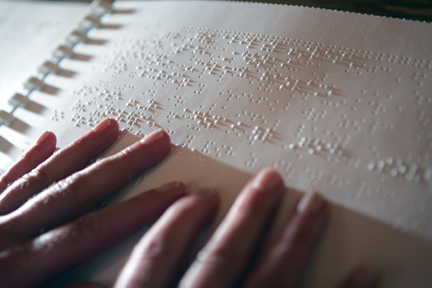 Alyssa Chadow at Temple Sinai reading from her custom made Braille siddur.

Calling a Blind Man to the Torah

3 Tammuz: Masat Binyamin on a Blind Man Being Called to the Torah

Not that I need more ways to be reminded of how little I know, but reading responsa literature repeatedly brings to mind authorities I have encountered less often than their impact on halachic thought deserves. For Masat Binyamin (that’s how the Bar-Ilan project writes it; I thought it was Maset), a book of responsa by R. Benjamin Aaron b. R. Avrohom Salnik, his having put a date on a responsum gives us a chance to “meet” him again.

Born around the middle of the sixteenth century (in the non-Jewish calendar; would it help if I said he was born early in the third century of this millennium in the Jewish calendar?), he was a student of Rema and Maharshal, a contemporary of such luminaries as Maharam Lublin, Levush, and the author of SeMA, an important commentary on Shulchan Aruch. For all the company he had, he was considered one of the greatest Torah scholars of his generation.

Let’s see what he has to say about a blind man being called to the Torah.

In Responsum 62, dated the third of Tammuz, 5370 (1610), he starts by noting there has been much discussion of the issue, culminating in R. Yosef Karo’s collecting the views in Beit Yosef, and concluding that it was prohibited [Orach Chayyim 139;3 ruled that a blind man cannot be called to the Torah; Rema added that Maharil said nowadays, since someone else reads anyway, it is allowed. Masat Binyamin seems to be working off of Beit Yosef to Tur rather than the Shulchan Aruch itself].

He wants to share his thoughts, nonetheless, especially since, with old age, his own eyesight has left him, and R. Yosef Karo’s ruling would render him unable to get an aliyyah [the implication, incidentally, is that he’s writing this either from memory or had a sort of secretary to find the necessary sefarim and read them to him].

His first step is to summarize the major views, starting with those who said it was not allowed. Rosh, at the beginning of the third chapter of Megillah, asserted that a ba’al keriah, a Torah reader, was instituted to avoid the fights that came with people insisting they knew how to read when they didn’t. [He means knowing the notes as well as the words, a source for the idea I’ve heard in the name of R. Soloveitchik, z”l, that Torah reading requires getting both right].

That would mean either the community would have to bear an unacceptable reading or would have to fight those who were delusional about their Torah-reading capabilities. To avoid that fighting, Rosh says, the ba’al keri’ah was instituted.

Enlightening as that is [and what it implies about our times, when even some ba’alei ker’iah don’t know how to read with the right grammar or notes!], his next point is about the oleh. Rosh held that the person called up still must read along with the ba’al keri’ah, otherwise his blessing is a berachah levattalah, has no purpose. Rosh explicitly rejects the possibility that it could be a blessing over the ba’al keri’ah’s reading. [That means that a blind person, who can’t read along, also can’t get an aliyah, since he has no action to bless].

For proof, he notes a Tosefta that says that where only one man knows how to read, he should get all seven aliyot, sitting down and standing up for each. Back then, there was only one beracha before the Torah reading and one at the end, so sitting and rising was the way to distinguish among aliyot; today, the separate berachot on each aliyah would do it. The Tosefta’s not allowing those who did not know how to read showed Rosh that they could not be called, since otherwise, why not call them,a nd have the knowledgeable man read for them? The farthest Rosh was willing to go was to allow an unlearned man to get an aliyah if he could follow the ba’al keri’ah well enough that he could read along; that wouldn’t help a blind man, who physically cannot read along.

Tur accepted his father’s view. Rivash felt that the person called up had to also be able to understand what he was reading.  Avudraham supported this view with a Tanchuma that spoke of the necessity of reviewing carefully before reading or speaking about Torah in public. He held that it was obligatory to object if someone got up to read who was unready to do so, and quoted R. Sa’adyah Gaon to the effect that even if there was only one kohen or Levi, he could only read if he could at least take direction from someone else “feeding” him the proper reading.

Those Who Allow a Blind Man to Get an Aliyah

Turning to those who permitted a blind man to get an aliyah, Sefer HaAgudah discards the berachah levatalah objection, since all Jews make birchot haTorah in the morning—this berachah, apparently, has another purpose, and even a blind person can make it [this doesn’t quite answer Rosh’s claim, since the seeing person’s berachah is on an act he’s able to do].

HaAgudah also knew of those who said that the blind person cannot read because we are not allowed to recite the Written Torah by heart [this will come up in my ou.org podcast, “A Responsum a Day”, on the 19th of Tammuz]. Now that there’s a chazzan (we call him a ba’al keriah or, more colloquially, a ba’al korei), that’s not an issue.

Others, too, allowed ignorant or blind men to get aliyyot when a ba’al korei would read for them, such as Maharil in the name of Mahari Segal, Shu”t Binyamin Ze’ev, and Shiltei Gibborim.

That’s the state of the discussion up to Masat Binyamin’s time.  To explain how he decides how to act in practice, he says that halachic decisions require explicit textual proof from the Talmud or Geonim, agreement of the majority of decisors, or the consensus of the latest authorities. By all three standards, he says, a blind man should be allowed to receive an aliyah.

First, he disputes the proof of the case of the man who got up and sat down seven times; for Masat Binyamin, that Tosefta was showing one way to handle the situation, not the only way.  a possibility, not the only way to handle the situation. As for berachah levatalah, the Gemara tells us that R. Sheshet and R. Yosef (who could not see) said the Haggadah for their families. So, too, our oleh is participating in this mitzvah of public reading and it’s therefore not levatalah [we might wonder whether the two are the same—the berachot in the Haggadah aren’t about reading from a written text, as they are for a public Torah reading].

He finds more support in the fact that no one who gets an aliyah, once we have a ba’al keriah, is supposed to read all that loud, because the Gemara says people can’t hear two readings at once. (In fact, Beit Yosef cited a Zohar that said the second person shouldn’t read at all. That makes the blind man no different than anyone else). If so, the beracha is being made on the ba’al keriah’s reading, not his own [although Rosh explicitly disagreed], which the blind man (and an ignorant one, who doesn’t know the reading) can make as well as a seeing one.

That’s as far as textual proof takes us. Counting up authorities, with some on each side, Masat Binyamin thinks a majority allow it, and approvingly notes Beit Yosef’s comment that we follow the Zohar wherever its ruling is not explicitly contradicted by the Gemara—even against a majority of other decisors, let alone where the Zohar is in line with that majority.

Last, the authorities who allowed it, Mahari Molin, Binyamin Ze’ev, Shiltei Gibborim, and Maharil were the more recent, and Maharil is the source of most of the customs of Ashkenazic Jewry. In all the ways of reaching halachic conclusions, then, Masat Binyamin sees the process as pointing to giving blind men aliyyot.

He finishes by expressing his surprise at the more stringent authorities’ deciding to “remove the yoke of Heaven” from people, especially from such a great and public mitzvah as this one. Even were it only questionable to allow it, he implies, we should do so for the sake of keeping blind men close to mitzvot.

That’s the lesson he takes from two examples in Eruvin 96a, Michal bat Shaul wearing tefillin without the rabbis of the time protesting (despite his own certainty that, by pure halachah, women should not wear tefillin) and the prophet Yonah’s wife going to the Beit HaMikdash on holidays, bringing a voluntary sacrifice that might look to others like it was obligatory.

Similarly, R. Yehudah, who held that blind people were not obligated in mitzvot, thought Chazal had instituted such an obligation, to keep them part of the Jewish people. Masat Binyamin applies that to being able to be called up to the Torah; denying a blind man that right, he writes, is akin to excluding him from being able to declare his acceptance of Hashem’s rule, and is tantamount to kicking him out of the Jewish people.

[The emotion in this last paragraph says a great deal about how he experienced getting an aliyah; some of that is true today for others. Without meaning to question his perspective, his reasoning would take us in directions I believe would have made him uncomfortable. Would he have agreed to giving any Jew an aliyah? Non-believers? Women? What about women and tefillin?

I instinctively doubt he would have been comfortable with large numbers of women of his time following Michal bat Shaul, but it’s not clear how he would object, given what he writes. He’s not here to tell us, but it’s a moment to notice when a great authority makes a statement that seems expandable, even as it seems equally clear he would not have accepted that expansion. It seems to me that, in such situations, the person making the statement hadn’t always thought it all the way through to its possible conclusions; what we do with that is a question for another time].

As I noted at the start, he does not mention Shulchan Aruch, including that Rema accepts Maharil’s view. It suggests he had not yet seen Rema’s glosses, because if he had, he could have just followed that, the Ashkenazic practice of allowing blind people to receive aliyyot, without needing to write a whole responsum  (and its emotional coda) defending his view.