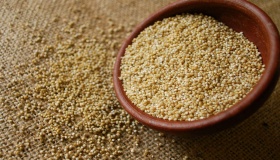 The Use of Quinoa on Pesach

For the past several years many people have been excited about the possibility of adding a new item–Quinoa–to an otherwise limited Pesach diet. Unlike past years, there are now several brands available under respected kashrus supervision. The question is whether Quinoa is an appropriate food to help fill that dietary gap.

Clearly Quinoa is not chametz because chametz can only come from the five species of grain (barley, rye, oats, wheat and spelt).

From the early days of the Rishonim (and perhaps even before) different communities have taken upon themselves not to eat various food items on Pesach even though they clearly were not chametz. This was done because there were various species, such as rice and beans (and later on corn) that were often grown/stored/processed with or near the five species. Additionally, in many cases they were cooked in similar recipes or styles and could be confused, and when ground into flour they often look similar and are used in similar ways. These factors often resulted in confusion or in the actual mixing of these products with real chametz. This is the basic explanation for the universal Ashkenazic custom of not eating kitnios on Pesach.

While many would like to think that these concerns no longer apply today, the fact is that many of these same issues still apply. Not so much in the home, where we generally purchase properly labeled food, but at earlier stages of growth, transport and production.

While it seems correct to say that this custom of not eating kitnios was not the result of formal rabbinic legislation, this custom has clearly taken on binding force. However, it is based on minhag (custom). Indeed, Rav Moshe Feinstein has written (Igros Moshe, Orach Chaim, vol. 3 #63) that there is no specific rule for what species should be included or not but is purely a matter of what the communities accepted upon themselves. As some new species were introduced into the European Jewish diet, such as corn, they were quickly treated as kitnios. Potatoes were generally not viewed as kitnios, while the status of others, such as peanuts, remained more ambiguous, varying from locale to locale.

Accordingly, if the communities today would treat Quinoa as kitnios, by definition it would be kitnios; but it seems correct to say that this has not taken place at this date, even though some rabbis have ruled not to use it and some communities do not use it.

If following a rabbinic ruling a community has refrained from using Quinoa, it would then indeed be prohibited in that locale based on Minhag HaMakom (established community practice). This rule of Minhag HaMakom would not seem to include cases where it was not used due to unfamiliarity or due to the fact that many are/were awaiting further rabbinic consensus or clarification (Yoreh Deah 214:1). Therefore, according to Rav Moshe Feinstein, there would seem to be room to permit the eating of Quinoa on Pesach in most communities. But there are other concerns.

Does this mean that Quinoa is allowed on Pesach?

All of the above notwithstanding, the use of Quinoa on Pesach is far from a simple matter. Quinoa is frequently stored, processed and packaged in the same facilities where the five grains are processed. As major kashrus agencies have reported, there is legitimate concern that either kernels or flour from other grains may be in contact or nearby. This, as explained above, is the very reason for not eating kitnios and in some cases there may be an actual concern of real chametz.

Most Sefardim who do eat rice on Pesach meticulously check it beforehand to ensure that no other grains have become intermingled. This is a tedious activity generally passed on as a family tradition. Realistically, most Ashkenazic Jews, who are not used to checking tiny food items that are otherwise kosher for Pesach, will not do this before eating Quinoa. [Of note, a popular brand of Israeli Quinoa bearing a Sefardi supervision has the following written on the package: “Kosher for Pesach only for those who eat kitniot, must be checked three times as is customary.”] But even if that checking is done, the process is far from simple. Rice is noticeably different from the other species of grains so a careful layman can do a good job of checking. Quinoa, in some cases, does not look very different from small pearled barley or couscous and to the untrained eye (of most American Jews who do not eat Quinoa often), it is hard to tell them apart. As such, the search may not be very meaningful.

What about specially certified Quinoa for Pesach?

Based on all of the above, there is room to come to two very different conclusions. Some rabbis, such as Rav Asher Weiss, have ruled that Quinoa is exactly like the various species of kitnios and should therefore be treated like kitnios even though there is no tradition of refraining from eating it (for most Jews there is neither a tradition of eating nor of refraining from this South American product that has only recently entered Jewish life). This idea of extending the minhag of kitnios is hardly unprecedented: historically, when other new world species entered the European Jewish diets, many were also included even though there was no prior strict tradition. The addition of these newer species did not and would not require an act of official rabbinic legislation, just as the original custom of not eating kitnios did not. It was simply based on community practice that had rabbinic backing. Additionally, even without “planning,” numerous species have effectively been added to the list of kitnios. It is highly unlikely that each of the many varieties of beans (navy, pinto, lima, black, white, garbanzo, etc.) that are today viewed as kitnios existed in the European communities, yet each has almost automatically been placed in that category and not used on Pesach.

On the other hand, the Star-K and more recently the OU have decided to certify a few brands of Quinoa that can be traced from the time of their growth, through the harvest, transit, processing and packaging. The logic behind this, as explained by Rav Hershel Schachter, is that since there is no tradition to forbid Quinoa and all of the potential problems can be avoided with proper supervision, there is simply no reason not to use it. This would also be different from the various species of beans since Quinoa is a categorically different product lacking any tradition, while the various species of beans are fundamentally the same as each other.

So, is Quinoa recommended for Pesach?

Even following this approach of the OU and the Star-K (of providing properly supervised brands), with the status of many other brands unclear and others known to be problematic, there is a serious practical concern. There is reason to be concerned that the following scenario may unfold and cloud this otherwise reasonable solution. Now that there are several brands of Quinoa bearing respected kosher supervisions, it is likely that the call will be heard: “Why bother with the details (and the likely added cost) associated with rabbinic supervision? Why not purchase other non-certified brands if the label says 100% pure or the companies verify via phone or e-mail the purity of the Quinoa?”

However, this attitude is problematic. In many cases, this is proprietary information that will not be fully shared. Additionally, many companies do not grow and process their own products from start to finish, so in fact they may not really know the answers to many of the questions we might be asking. In such cases, it is likely that the companies will not be willing to disclose this fact to the public for proprietary reasons. This can be equally true for smaller brands sold in health food stores and organic products (although it is also possible that some of this latter group might meet the criteria needed to be used comfortably on Pesach).

I believe that this may be a significant concern particularly in this age. There is a heightened level of comfort and confidence due to the general accessibility of information via the internet, even when that information may be incomplete. It is also true that a level of cynicism often exists, caused by the feeling that many hashgachos are done for financial or “political” reasons, and in fact are not really needed (as seen in part in the case of products with multiple hashgachos). Yet, Quinoa has real concerns of chametz. Once permitted brands become available with proper hashgachos, their presence may well open the door for other unsupervised brands to be used as well, even though some of those other brands may indeed encounter some of the very real problems mentioned above.

If there is any reason to hope that this will not be the case, it is due to the widespread tendency to be overly strict on Pesach in all sorts of ways (a topic that deserves its own essay). We can only hope that this will prevent the “do it yourself” attitude or cynicism from leading to potential chametz issues in unsupervised Quinoa.

2016-04-22
Asher Bush
Previous: Recognizing G-d’s Love For Am Yisrael
Next: Have a Kosher and Happy Passover