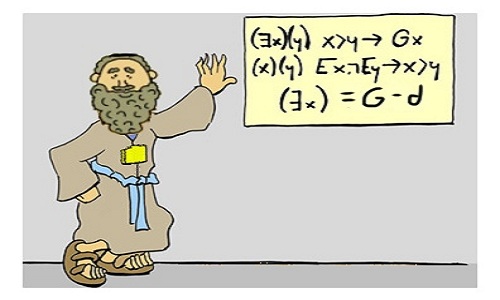 You expect members of an enslaved nation to ask many questions before agreeing to rebel against their masters. However, asking the name of their proposed redeemer’s deity seems only marginally relevant, a low priority considering the logistical issues they face. Yet Moshe, before asking how to prove his ability to redeem the Jews from Egypt, asks what name to call God when the people ask. God’s answer is: “I will be what I will be” (Ex. 3:15). This is hardly a simple answer to a straightforward, if unusual, question.

Rambam (Moreh Nevukhim 1:63) sees in this exchange a more profound exercise. Except for the Levites, the Jews in Egypt adopted the local idolatries (Mishneh Torah, Hilkhos Avodah Zarah 1:3). Before accepting that Moshe was God’s messenger, they first had to be convinced that God exists. Following R. Sa’adiah Gaon’s translation of the verse, Rambam explains that God gave Moshe a three-word proof for God’s existence. A Necessary Being must exist eternally (see Maimonides III in this post: link).

God gave Moshe a philosophical proof for the existence of an all-powerful, eternal deity as the first step in convincing the Jews that Moshe was their savior. Moshe then asked for further proof, this time of his selection, for which God gave him two signs (Ex. 4:1-9).

Ramban (Ex. 3:14) rejects the premise that the Jews questioned God’s existence. These believers descendants of believers did not require proof of God’s existence. Rather, they would ask with which of God’s attributes, which His names represent, they would be redeemed. Would God save them through mercy or through judgment? The answer: mercy within judgment.

Why did Ramban find Rambam’s approach so implausible? I suggest it revolves around the status of Christianity within Judaism. Rambam unequivocally rejected Christianity as polytheism (Mishneh Torah, Hilkhos Ma’akhalos Assuros 11:7; Hilkhos Avodah Zarah 9:4). The concept of trinity, including divine incarnation in a human, so violates God’s unity as to qualify as polytheism, notwithstanding the objections of Christian philosophers. The Rambam believed that sharing divine power with any other being detracts from God’s sovereignty and unity. He cannot be all-powerful if other gods have power. He cannot be a single deity if He can be divided into parts (or even attributess).

According to some interpretations, Tosafos (Sanhedrin 63b sv. assur) disagreed on this (see Pischei Teshuvah, Yoreh De’ah 147:5). They believed that Noachides are allowed to accept more than one god; they may worship God in partnership (shituf) with other beings. While Jews are forbidden to commit shituf, gentiles, operating under the Noachide covenant, may do so. Whether this interpretation accurately reflects the view of Tosafos is a matter of significant debate, with significant authorities on each side.

According to Rambam, any dilution of God’s unity constitutes belief in a being other than God. Shituf, an impure form of monotheism, is a lesser form of atheism. (In a similar vein in the reverse direction, I have been accused by some Christians of being an atheist because I reject Jesus, which to them means rejecting God.) According to an interpretation of Tosafos, shituf is acceptable. An impure monotheism is still monotheism.

If Ramban agrees with Tosafos, even if only with the underlying theory and not necessarily its application to the Noachide code, then we can understand why he rejected Rambam’s interpretation of God’s name. According to the Rambam, because the Jews in Egypt were idolators, they rejected the true, all-powerful God, the Necessary Being. Their polytheism was mild atheism. Moshe had to prove to them the existence of a pure God, an infinite and eternal unity, before claiming to be His messenger.

However, if our assumption is correct, Ramban would find this all strange. Shituf is not atheism. A polytheist can still believe in God even if he believes in other deities as well. The Jews’ false extra beliefs did not imply lack of belief in God. Therefore, any proof of God’s existence would be unnecessary.