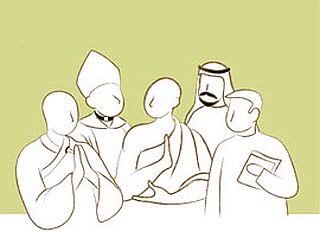 In the mid-1960s, Vatican II’s call for greater openness to other faiths led to much excitement over leaders of various faiths working together. On the 19th of Adar I 5727 (1967), R. Moshe Feinstein zt”l was asked about them by Dr. Bernard Lander, z”l, who later founded Touro College. (When R. Feinstein published the responsum in Iggerot Moshe Yoreh Deah 3;43, he included a follow-up correspondence with R. Yosef Dov Soloveitchik zt”l from the 9th of Adar II, which is why this is here).

R. Feinstein’s response is at least as interesting for how emphatic he was as the specific halachic content; too, his turning to R. Soloveitchik (“The Rav” in Modern and Centrist Orthodox circles) for confirmation and cooperation is a reminder of R. Soloveitchik’s similarly adamant opposition to such interactions. Many of the Rav’s students continue to be guided by that, a view he articulated in “Confrontation,” first published in the Spring 1964 edition of Tradition. Others of his students argue that circumstances have changed sufficiently to allow for such dialogue today. Some might claim that R. Feinstein’s responsum on the topic is not therefore the last word; no matter one’s position on that issue, it is an important text in the conversation.

The Intent of Interfaith Meetings

Dr. Lander he had committed, as a member of the RCA, to joining other members of the Synagogue Council [itself an organization some Orthodox leaders opposed, where leaders of the various Jewish denominations would find areas of cooperation] in an interfaith meeting with Catholics and Protestants (in the US, at that time, apparently, interfaith did not include Muslims). Dr. Lander would only be interacting around issues that had no connection to religious practices.

R. Feinstein was nonetheless completely convinced—he says it’s pashut u-barur, simple and clear — that this is prohibited. He calls it an abizrayhu, an extension, of idolatry [remember that halachah sees Catholicism and some forms of Protestantism as idolatry, albeit one Prof. David Berger yibd”l has noted is often treated as more monotheistic than other idolatries, allowing some halachic leniencies]. R. Feinstein claims that the popes who initiated these meetings (John XXIII and Paul VI) were doing it with the intent of drawing Jews from their faith. Having realized that it’s easier to lure people with friendship and welcome, they adopted that path instead of the oppression and violence pushed by previous popes.

Assumptions and Facts Underpinning a Responsum

[Before we continue, it’s worth pausing to absorb R. Feinstein’s claim, and to wonder about its accuracy: in his view and experience, Catholics and perhaps other Christians were fundamentally interested in having everyone join their religion. This is not true of Jews; we want everyone to accept Hashem as we understand Hashem, but not necessarily to convert to Judaism. Whether and to what extent R. Feinstein was right about Christians—and whether, whatever was true back then, his claim is accurate now—plays an important role in how halachic authorities would decide how to apply this responsum.]

That being so [in his view] any interactions that produce a greater friendship or closeness are a prohibited coming closer to idolatry. For rabbis to do it runs the peril of counting as mesit u-mediach, as leading or seducing others, individuals or groups, away from Hashem. Even if Dr. Lander and his colleagues avoid praising or flattering priests and their beliefs—which the  Conservative and Reform rabbis did at these events, sparking harsh words from R. Feinstein—his attendance will lead others to believe it is acceptable to partake of similar events, luring people to see beauty in these other religions, and perhaps even be drawn to join them.

R. Feinstein’s opposition extends to Dr. Lander’s sending a transcript of what he intended to say, because that will aid the success of the meeting. He borrows an halachic truth about a mesit, that we do not seek exculpatory claims for such a defendant; he applies it here [loosely] to saying that intet does not matter—if one’s actions lead others away from Hashem and to idolatry, that person is a mesit even if s/he did not mean it that way.

For that reason, Dr. Lander should renege on his commitment to attend and to speak.

Following Up With the Rav

A couple of weeks later, R. Feinstein wrote R. Soloveitchik, characterizing the issue as young rabbis having been fooled by the invitation to converse about nonreligious matters; they had assumed it should be ok, since they were not discussing or debating religion.

Aside from his reiterated belief that the neutral conversations were a pretext to draw the rabbis into talks about religious issues, the cooperation itself is a problem for R. Feinstein. As shown by the media’s reporting on such events as examples of religious cooperation among faiths.

Since there was a planned upcoming event on May 7 in Boston—where R. Soloveitchik was rabbi—R. Feinstein was writing to ask him to join in a call declaring it prohibited. R. Feinstein is hopeful their joint action will lead Orthodox rabbis stopping such activities, and block efforts toward ecumenicism. [They succeeded, as the RCA and OU pulled out, and the RCA announced that it would veto the Synagogue Council’s participation in any future such events].

R. Feinstein is comfortable with R. Soloveitchik writing his own version if he prefers, and acknowledges the Rav’s rough time [he had recently lost his mother, brother, and wife, in a space of three months], but says that it’s a matter of kevod shamayim, the honor of Heaven, and he is therefore confident the Rav will sign and return the joint letter to him. There follows the text of the prohibition they pronounced, dated to Ta’anit Ester 5727.

Making Sure We Don’t Ignore Reality

I don’t generally comment on these responsa, since it’s not my place. Here, however, I worry that some readers will reject R. Feinstein’s view as extreme and deny its ascription of motives.

That’s to some extent a factual question of what was going on, history rather than halachah. As a responsum that does or doesn’t continue to guide us, the motives of leaders of idolatrous faiths are still one factor to consider. If someone could be sure (correctly so) that such meetings weren’t to draw Jews away, that might leave room to set aside R. Feinstein’s responsum.

There’s a big “except” to point out. Because even if we question R. Feinstein’s assessment of the motives of the priests involved, or religious leaders we might meet today, it seems to me that such events do clearly spur observant Jews to soften their stance on those faiths, to see them as fundamentally the same as ours. They speak of serving Gd, we speak of serving Hashem; especially since Catholics agree with Orthodox Jews on many countercultural social mores (on such hot-button issues as abortion, assisted suicide, and sexuality), it’s easy to take the next step and think they’re not all that different from us.

The Difficulties of Communicating Complex Realities

I think that mistaken blurring of lines bothered R. Feinstein deeply, because it means the Jews in question have lost sight of basic propositions of Jewish faith. It’s like Prof. Berger said to me, years ago, when he delivered his paper at the Orthodox Forum, detailing the ways reputable halachists have carved out leniencies in treating Catholicism as less odious than other idolatries (since it’s in “a monotheistic mode”). It was a paper that mori ve-rabi, my master and teacher, R. Lichtenstein called stunning (in a good way).

During a break in the proceedings, I approached Prof. Berger and commented that it didn’t change the fact that halachah saw it as idolatry. He agreed; I then wondered at the difficulty of communicating to people that a major world religion, for all that it had many of the aspects of monotheism we find so important, still counted, halachically, as idolatry. He agreed it was a challenge, but that was where we were.

I think R. Feinstein understood that, and it was a reason such interactions were problematic— for individual Jews to deal with individual Catholics, that was people learning to get along. But when people explicitly identified as religious leaders want to meet, that would make it all that much harder for Jews to remember our complicated attitude towards that religion. It would become (in many circles, has become) too easy to brush off the differences, in the name of what seem higher goals, such as avoiding animosity and fostering peace.

I don’t intend to be expressing any particular opinion, only to note that even those who might claim that R. Feinstein’s responsum was specific to his time have to be aware of all the issues he raised, those that made claims about the motives of the non-Jews involved in such meetings, and those that related to how Jews would be affected by such meetings. Only then will we have fully understood R. Feinstein’s letter to R. Soloveitchik from the 9th of Adar II, 5727.