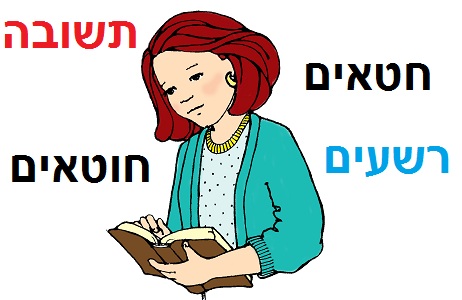 Perhaps the most famous appearance of Beruriah in the Talmud is regarding her husband, R. Meir’s, inappropriate response to hooligans who were hounding him. R. Meir prayed that God kill them. Beruriah objected that R. Meir should instead pray that they repent from their evil ways. Quoting Psalms (104:35), she pointed out that the verse says “yitamu chata’im min ha’aretz, let sins cease from the land.” It says chata’im (sins) and not chotim (sinners). Therefore, R. Meir should pray that the sinners remain intact but repentant, so their sins cease. This is a beautiful idea but it faces serious problems.

The first is basic grammar. Chata’im does, in fact, mean sinners, despite Beruriah’s protests to the contrary. Someone who steals once is called a goneiv. Someone who steals repeatedly is called a ganav, a thief. Similarly, someone who sins once is called a chotei while someone who sins habitually is called a chata. The wicked people of Sedom are called “evil and sinners (chata’im) to God” (Gen. 13:13). The first verse of Psalms praises a man who does not walk in the path of sinners (chata’im). Indeed, Rashi on the verse under discussion (Ps. 104:35) comments that chata’im means chotim, in direct contradiction to Beruriah’s explanation. [1]See also Rashi and Ibn Ezra to Prov. 13:6; Ha-Kesav Ve-Ha-Kabbalah, Deut. 14:21.

The Maharsha (Chiddushei Aggados, ad loc., sv. chata’im) explains that chata’im can mean both sins and sinners. In contrast, chotim only means sinners. Beruriah’s argument was from the biblical use of the ambiguous term rather than the clear word chotim. This must mean that the intent is for sins to cease and not sinners. However, this answer also suffers a grammatical problem. The plural of cheit is chata’im vowelized with a chataf patach under the first letter and without a dagesh in the second letter. Chata’im vowelized in that way means sins. But in our verse, chata’im is vowelized with a patach and a dagesh, which can only mean sinners. Rav Moshe Ibn Chabib, in his Ha-Kosev commentary, suggests that Beruriah was referring to the written word without the vowels. In that case, chata’im can mean either sinners or sins.

Rav Chaim Elazar Shapira, the author of Minchas Elazar (Divrei Torah, vol. 2, no. 46), is so bothered by this question that he suggests Beruriah is wrong and rejected by the Talmud, pointing out her gender as a negative in this context. However, Rav Asher Weiss (Responsa Minchas Asher, vol. 1, no. 64) takes issue with this view. He points out that the Sages would not have quoted Beruriah repeatedly if they felt she overstepped her bounds. Instead, he suggests that Beruriah was offering a derash (homily) that that is theologically correct even if not textually, does not have to follow the strict rules of grammar. Rashi, in his commentary to Psalms, offered the peshat explanation of the verse. I believe that this was also the intent of Rav Moshe Ibn Chabib, mentioned above. Rav Avraham Weinfeld, the author of Lev Avraham, also strongly rejects Rav Shapira’s suggestion (Shuvah Yisrael, vol. 2, ch. 10 sec. 25, p. 110). He points out that the Zohar (Vayera, Midrash Ha-Ne’elam) explicitly supports Beruriah’s position.

Rav Avraham Dovber Kahana Shapira (Devar Avraham, Chelek Ha-Derush, p. 47) differentiates between occasional sinners and habitual sinners, as we discussed above. Beruriah’s message is that the verse only says that habitual sinners should cease (chata’im) and not occasional sinners (chotim), and even habitual sinners will not cease as we see from the end of the verse. Rather, they should repent and cease being sinners. This is what R. Meir should pray for, not their deaths. [2]See also Rav Yehudah Ginsburg,Yalkut Yehudah, vol. 1, p. 92, cited in Rav Moshe Zuriel, Leket Peirushei Aggadah, Berakhos 10a.

The Maharsha (ibid.) raises another difficulty with Beruriah’s approach. Beruriah had suggested that R. Meir prayer for the hooligans to repent. However, the Talmud (Berakhos 33b) teaches us that everything is in God’s hands except for fear of God. In other words, God allows us the freedom to choose whether to follow God’s word or not. How could R. Meir pray that God cause the hooligans to repent when God specifically does not do that?

If you pray for your own repentance, the request falls under the saying that God helps you get to where you want to go (Makos 10b). However, you have to make the first move. If you pray for someone else to repent, that other person is not beginning the repentance process. If so, how can the prayer that Beruriah recommended help?

The Maharsha leaves this question unanswered but later commentators offered solutions. Iyei Ha-Yam (quoted in Anaf Yosef to Ein Ya’akov, ad loc.) distinguishes between internal and external reasons for sin. Sometimes people sin because the desire for a forbidden pleasure burns inside them. Other times, people do the wrong thing when they find themselves in a situation that lends toward sin. Someone mired in poverty might feel a need to steal that he otherwise would not feel if not for the poverty. Beruriah’s prayer was that the hooligans would emerge from circumstances that lead them toward sin.

Ahavas Eisan (Ein Ya’akov, ad loc.) quotes Maharsha’s distinction between natural and intellectual fear of God (Berakhos 33b sv. atu). The latter is completely subject to free will. A person can choose to recognize God’s sovereignty and power, fearing the ultimate force in the world. However, a natural fear is that of a third party, an external force God sends to punish people. God can send an enemy or a natural disaster to scare people into doing the right thing. Beruriah’s prayer was that God would exercise His power and instill a natural fear into the hooligans, sending them onto the right path.

Rav Yehoshua Hartman (Maharal, Be’er Ha-Golah, vol. 2, ch. 7, sec. 6, p. 420 n. 360) suggests that Beruriah’s prayer is a for a repentance that goes unrewarded. God does not reward people for good deeds performed under duress. However, sometimes God forces people to do the right thing, refraining from rewarding them because they did not choose to do the mitzvah. Similarly, if God installs fear of Heaven into an individual, He does not reward the person for any positive results of that fear.

The proper relationship to maintain with evil people is complex. Beruriah’s prayer is an important source but one that only shows part of the picture.