Posted by: Gil Student in From The Hashkafah Files, Magazine, Posts Feb 11, 16 1 Comment

Forty years ago, the Office of the Chief Rabbi of the United Synagogue of England, Lord Rabbi Dr. Immanuel Jakobovits, published the first issue of what would become an important magazine of Orthodox Jewish thought, L’eyla. I recently acquired a large number of back issues and took careful notes on the first ten years of the magazine. What follows are some reflections as well as some statistics that I find interesting. I am certain that if I was more familiar with the people and politics of the time, I would have much greater insight to the motivations and decisions. All I can offer are thoughts of an outsider whose main window is through the magazine itself. (Note: click on any of the images below to enlarge)

Understandably, the dominant voice in the magazine is R. Jakobovits. Some of his papers and speeches are published, as well as original articles. As a pioneer in the field of Jewish medical ethics, his articles on the subject are particularly important. At the time the magazine began, R. Nachum Rabinovich served as the Dean of Jews’ College, effectively its rosh yeshiva, until his aliyah in 1983. As a prominent Torah authority, his many articles are very interesting.

Other than the Chief Rabbi, the only author with more articles than R. Rabinovich was the next Chief Rabbi, R. Jonathan Sacks. L’eyla provided a young R. Sacks the opportunity to showcase his clarity of thought and original ideas. Perhaps surprisingly looking back from today, when he focuses on Jewish thought, R. Sacks wrote a lot in the magazine about halakhah. However, he also wrote on theology and Jewish society, sometimes eliciting objection from the left.

The first letter to the editor published in the magazine was in sharp disagreement with R. Sacks’ attempt to formulate an ideology for the United Synagogue. Years later, in reviewing a symposium in the journal Tradition on the state of Judaism, R. Sacks boldly challenged on four fronts the viability of Modern Orthodoxy, [1]The four challenges are: 1. There is no Jewish-secular synthesis. Secular thinking makes Judaism one of many options. 2. A completely Western lifestyle is antithetical to Judaism. “We can enjoy … Continue reading quite surprising today when he is considered among the movement’s leading thinkers.

I find the English usage of personal titles confusing, as well as the occasional use of first initial rather than first name. Some rabbis are called rabbi, some reverend and some dayan. I believe this has to do with a combination of professional position and personal preference. Among the authors with the most articles, five of the top 11 are called Rabbi Dr and a sixth is Dayan Dr. This speaks to the Modern Orthodox orientation of the magazine, even if R. Jakobovits may have preferred a different description.

Out of curiosity, I kept track of the gender of authors. Did a mainstream Orthodox magazine at that time include many women writers? No.

By my count, 96% of the authors were men. This is not entirely surprising. The magazine began as an organ of the Chief Rabbi aimed primarily at rabbis, at least that is how it appears to me. Much of the discussion in the early issues revolves around the rabbinate. Interestingly, the first issue includes a few articles on the subject “Why Be A Rabbi?,” accompanied by pictures of the authors. The rabbis’ pictures include their wives, which was tasteful but unnecessary. Today that might be considered controversial but apparently then it was not. 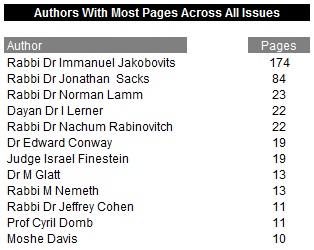 I find the style fairly formal, even though few of the articles had footnotes or endnotes. I’m not sure if this is a generational or geographic difference. I noticed a marked English preference for lofty, bureaucratic titles. Everything is an agency, committee, board or institute. One nice feature of the magazine is explaining the activities of different communal organizations. While not particularly exciting, it offers insight into what these different agencies saw as their missions.

As I mentioned above, it seems to me that the magazine originally targeted rabbis as its main audience. Many of the articles in the earlier issues discuss the rabbinate and how rabbis interact with the community. 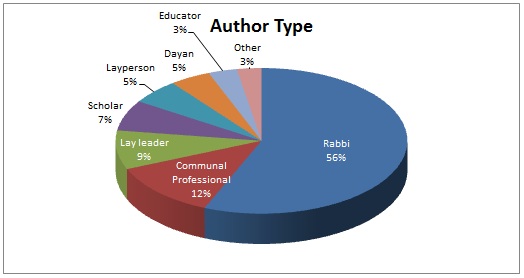 The first issue published articles from three people answering “Why Be A Rabbi?” (Note that the question was not “why be a minister?”) Over time, the focus shifted to laypeople and addressed more topics that have broad interest. In Spring 5744 (1984), the magazine announced it would be jointly published, with Jews’ College joining the Office of the Chief Rabbi. I do not know the story behind this but it clearly demonstrates a shift in audience. This would be followed the next with a change in look, including more modern design and layout.

As I just hinted, the magazine strictly used the Jewish year. The first issue was in 5736 (1976) and the magazine continues identifying by the Jewish year. I’m not sure whether this was driven by halakhic considerations (many authorities oppose the use of Christian years) or some form of cultural pride/Zionism. In contrast, the season is given in English. So the first issue is Winter 5736 rather than a Jewish month.

The most common recurring thought as I read through these old magazines is how the same issues that were urgent in the late 1970’s and early 1980’s remain urgent today. The challenge of reaching out to the assimilating masses of Jews perhaps defines the post post-Holocaust experience. As the memory of the Holocaust fades, and as Jews find acceptance and success in Western society, Jewish leaders ring the communal alarm. We must bring them back before they completely lose their identities. We must hold innovative programs and harness our creativity for this all-important cause. The continuation of this theme today implies that while we may have succeeded with some, generally we have failed and the problem has only grown.

This is closely related to the challenge of effective Jewish education. New approaches are apparently vital yet costly. Students must not only receive education but inspiration, training to be contributing members of the Jewish community. Exceptional students–those who do not fit the standard mold particularly due to handicap–must be included in our schools but this inclusion adds significant cost to the already expensive education. How do we pay for this extensive educational structure? And how do we encourage young adults to commit to communal professions when they need to be able to afford the high cost of Jewish education? This vexing problem remains at the fore of communal conscience.

Other issues include: revitalizing the synagogue service, women’s roles in the Jewish community, apparent conflicts between science and Torah, defending shechitah practices, and the search for a Modern Orthodox ideology. This is in addition to the timeless complaints of rabbis, lay leaders and communal professionals about the inevitable friction of communal activity.

But not everything stays the same. The magazine contains frequent statements by prominent Russian immigrants and reports of visits behind the Iron Curtain. The world has changed and this problem has been resolved positively, albeit causing other communal issues that demand attention.

The magazine is understandably Anglo-centric. Less understandable is its focus on Ashkenazic culture and halakhah. An article or two about Sephardic history only highlights the general omission.

The Singer Siddur received considerable criticism, almost hatred. Even its defenders voiced significant critiques. This has changed, with the publication of a new siddur with R. Sacks’ translation and now the Koren suite of siddurim. 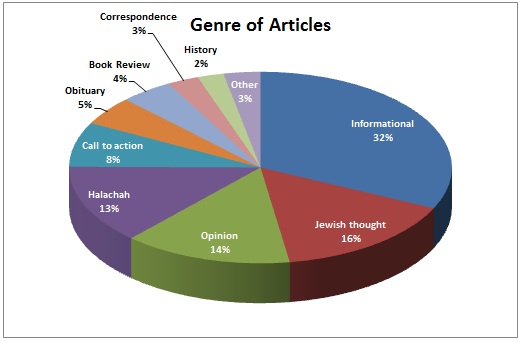 In Spring 5743, R. Sacks tried to initiate an interactive column called Response. He presented questions to five rabbis, published their responses and waited for readers to send in comments. The response was so minimal that his follow-up column was titled Zero Response, which was a bit of an exaggeration. Apparently, the issue that struck people the most was the least consequential–rabbis wearing canonicals. One rabbi felt strongly in continuing the tradition while R. Jeremy Rosen harshly condemned the practice, exaggeratedly calling for the excommunication of rabbis who wear canonicals. This provoked a response. I doubt that this issue resonates anymore. To the best of my knowledge, rabbis who wear canonicals are fairly rare. 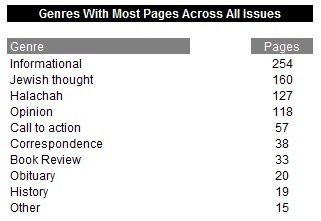 In any magazine issue, some articles will be better than others in form and content, and articles in general will interest different people. I found many very interesting articles in those ten years. I note here just a few, with the full knowledge that I will be omitting many worthy of mention. A full catalogue of articles in spreadsheet format is available here: link

A full catalogue of articles in spreadsheet format is available here: link