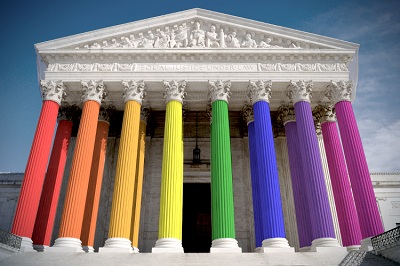 Obergefell and the Jewish Community

The Obergefell decision is going to impact negatively on Jewish life in America, both legally and culturally, although the blow will be cushioned because of the gradual nature of the deterioration.

Give credit where credit is due.  Seldom has a social movement succeeded in revolutionizing American society with the speed that was exhibited by the advocates for same sex marriage. If we recall that in 2008, both Democratic candidates for the presidency opposed same-sex marriage, it means that in less than a decade, the nation, its laws and values, and the very foundation of marriage were fundamentally transformed in ways that are both obvious and unpredictable. Advocates achieved their goals at breakneck speed by framing their cause as one that is rooted in the practice of individual rights and liberties, mooring themselves in the language and rhetoric of the civil rights movement.  And therein lies one of the primary dangers ahead for the Jewish community and other religious groups: the equation, now subtle but perhaps in the future more overt, between proponents of traditional marriage and racists.

That does not bode well for the Jews and others who adhere to the Judeo-Christian ethic on which American moral norms were once based. We are all familiar with the statement in Masechet Chulin (92b) noting that even the notoriously decadent Generation of the Flood did not have the gall to “write a marriage contract between two men.” That inhibition has been eradicated, with its converse now enshrined in American law. For the first time, something the Torah defines as a sin for both Jews and non-Jews has gained official recognition, popular acclaim and legal protection. We failed in our obligation to ensure that this society adhere formally to the Noachide laws. That failure was perhaps inevitable, as religious Jews are indeed a minority within a minority and with limited influence on popular cultures and mores.

Certainly, efforts have been and will be made to protect the religious liberties of adherents to traditional morality who do not wish to associate with or be seen as sanctioning marriages that violate their religious sensibilities. Those laws will work for a time and to a point, but they will not protect “offenders” from the expenses and stresses of defending themselves against the foreseeable lawsuits for refusal to rent a facility or provide personal services for a same-sex wedding. Nor are those laws guaranteed to withstand the scrutiny of courts that are uncommitted to constitutional precedent but simply write into law their personal moral predilections.

In other words, it is entirely predictable that a shul that refuses to rent its social hall to a same-sex couple – or even to announce in its bulletin the upcoming nuptials – will be sued, be compelled to hire lawyers to defend its rights, have the laws it thought protected their religious freedoms be overturned, and/or be treated to the public scorn worthy of a place of worship that decided, willy nilly, to deny membership to blacks for reasons strictly limited to race. The expense of the lawsuit will render any proposed legislative protections ephemeral and hollow.

Those who believe that this a farfetched, unrealistic nightmare would do well to consider the case of Bob Jones University, the religious Protestant college located in Greenville, South Carolina. Their long-standing policy – revoked only in the year 2000 – barred its students from engaging in interracial dating or marriage, which, unfortunately, they based on their reading of the Bible. In 1982, the United States Supreme Court upheld the IRS’s revocation of Bob Jones University’s tax exempt status on the grounds that such racial discrimination violated public policy. It does not take a great leap of faith or imagination to envision a similar process unfolding in the near future that challenges the tax exempt status of shuls, yeshivot, or other Jewish institutions that cling to similar “repugnant” or “outdated” notions of traditional marriage. That the differences between racial discrimination and same-sex marriage discrimination are abundantly clear and eminently justifiable will not matter one whit to the institution that is sued or harassed and threatened with financial ruin protecting its own religious liberties.

Indeed, the threat to the tax exempt status of religious organizations that oppose same sex marriage was admitted by the Solicitor General, Donald Verrilli, Jr., during oral argument in this case, and noted by Chief Justice John Roberts in his dissent: “… [t]he Solicitor General candidly acknowledged that the tax exemptions of some religious institutions would be in question if they opposed same-sex marriage. … There is little doubt that these and similar questions will soon be before this Court. Unfortunately, people of faith can take no comfort in the treatment they receive from the majority today.” That is the frightening new world that we have entered, and in which promises of legislation that will allegedly shield religious groups or individuals should provide little comfort. We are at the mercy of tomorrow’s libertine, legal crusaders.

A religious homeowner that refuses to rent out his basement apartment to a same sex couple – not to mention the caterer that refuses to provide food for a same sex marriage – will find themselves in profound legal trouble. Once opposition to same sex marriage or relationships is defined as bigotry – and as the Supreme Court dissenters in Obergefell conceded, that is the import of the Court’s decision – all putative legal protections will not matter. American law does not protect bigots; it prosecutes them, it has them sued, and in the case of one upstate New York couple who refused to rent their farm for a same sex wedding, it sentences them to weeks in an indoctrination camp to cure them of their biases.

All of which begs the question that advocates of same sex marriage successfully raised during their campaign: What possible harm can accrue to you or me if Jack and Joe or Fran and Sue are allowed to marry? This question has several answers; unfortunately, none of them resonated with the popular media (including the implicit threat to religious liberty). But this revolution in our conception of marriage will dramatically alter the way children are educated and socialized in this society.

Marriage is already a troubled institution in a land that celebrates individuality and permissiveness and chafes under any type of moral restraint. Imagine a society in which children are taught that boys can marry boys or girls, and girls can marry girls or boys – that any combination in sex or number is “normal.” Identity confusion will reign with all the attendant consequences to one’s pursuit of happiness and spiritual growth. Imagine living in a society in which polygamy, polyandry and polyamory are legalized and normalized (after all, once marriage is legally redefined, there is no logical or legal reason to permit same sex marriages and prohibit marriages involving multiple partners.) The cherem of Rabbenu Gershom that proscribed polygamy for Ashkenazic Jews will be a dead letter, and our aspiration to build holy homes will be so out of touch with prevailing norms as to make religious Jews outcasts (or even greater outcasts) in civil society. That phenomenon has bedeviled us since the 1960’s but will be exacerbated in the near future.

Additionally, the decision signals that opposite-sex parenting is not the ideal environment in which to raise children, which is the exact opposite of what the Torah encourages and what millennia of human history has reinforced. That attitude can seep into our world as well.

The Court has now spoken and its decision will not be reversed anytime soon or perhaps ever.  Notwithstanding the above, we might be able to tolerate a “live and let live” scenario, but SSM advocates have always been less interested in rights and more interested in legitimacy. The issue that transcends the Court decision is one that we have faced before with mixed results: how can Jews remain active and viable members in a society that is in steep moral decline, and whose cherished values are antithetical to basic Jewish norms? There have always been individual halachot that set us apart from the rest of society. Kashrut regulated what and with whom we could eat; Shabbat provided us with a spiritual cocoon for at least one day a week to enjoy unmitigated holiness; Taharat Hamishpacha sanctified marriage and elevated the marital bond beyond the mere provision of mutual physical pleasures. Now, for the first time in memory, a particular halacha – the ban on same sex relationships – is perceived by the American legal system, if not also by a substantial part of the population, as morally abhorrent and indicative of an archaic and particularly detestable form of hatred.

Jewish children raised in such an environment will be hard-pressed to see the beauty, wisdom and Divinity in a Torah that communicates such principles while viewed through that distorted lens. And if such a sentiment goes unchallenged and unrefuted, their commitment to mitzvot will necessarily wither. We will need to redouble our efforts to ensure the survival and relevance of our Torah-based morality.

The other factor to ponder is that the Court has, again, reduced Constitutional jurisprudence from a system of objectively-based rights to the personal whims of five justices. Five justices who could on their own redefine marriage (about which the Constitution itself is completely silent) could also redefine the First Amendment’s freedom of speech and exercise of religion to the detriment of Jews as well.  The ongoing efforts to criminalize or penalize certain types of speech on campus or the workplace are a harbinger of such encroachments on our freedoms. Could a statute define the public reading of Vayikra 18:22 as unlawful  “hate speech”?  Not any time soon, one would hope, but there are few guarantees for the future. A government of laws provides more security than a government of men (and women). Sadly, at present, laws do not mean what they seem to say as much as they mean what the Justices say they mean, and the fact that the Court overturned the laws in support of traditional marriage democratically enacted in dozens of states is also ominous.

Is the picture irredeemably bleak? Well, yes, but that too is part of the birth pangs of Moshiach. The pre-Messianic world, which is now physically at war with itself – there is no place on the globe safe from the scourge of Islamic terror –  is also a world that is witnessing a collapse of the moral and ethical norms that enabled mankind to stay afloat, even if uneasily, for millennia. It is a world that is ripe for Moshiach – and that demands that we Jews strengthen ourselves in our faith and commitment, never weary of preaching G-d’s morality in a polite and appealing way to our neighbors, and maintain the courage of our convictions despite the legal and rhetorical assaults against us that can be expected.

There are some laws that protect a minority that all good people should welcome, and other laws that purport to protect a minority but instead encumber, inconvenience and prejudice the majority. That is what the Obergefell decision accomplished. The world may have changed for the worse, but we hope and pray that it can still – and soon – change for the better.

Rabbi Steven Pruzansky is the spiritual leader of Congregation Bnai Yeshurun in Teaneck, NJ. His website is RabbiPruzansky.com.