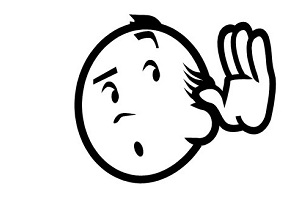 Question: I daven with someone who davens Shemoneh Esrei loudly enough to disturb my davening significantly. Can/should I say anything?

Answer: There are two matters to discuss: whether the davener may do what he is doing; what you should do about it. The former is straightforward; the latter is difficult.

The gemara (Berachot 31a) learns from Chana (Shmuel I:1:13) that tefilla (referring at least mainly to Shemoneh Esrei) should not just be contemplated but that words should be formed by the movement of the lips, but in a manner that is not audible. The gemara (Berachot 24b) even refers to one who recites tefilla aloud as one who does not believe Hashem will hear him otherwise and to one who raises his voice as an idol worshipper. There is a machloket, from Talmudic times and on, whether it is proper to pronounce the words loudly enough to hear them himself (see Beit Yosef, Orach Chayim 101). While Kabbalistic sources oppose being able to hear, standard halachic ones recommend being able to hear (Shulchan Aruch, OC 101:2, but see Be’ur Halacha ad loc.).

The gemara (ibid.) assumes that the main problem of saying tefilla audibly is contextual and that he may do so if he needs to for his kavana (concentration). The Taz (OC 101:1) posits that it is justified even to improve his otherwise reasonable kavana (the Be’ur Halacha, concerned for the Kabbalistic opinions that audibility disqualifies tefilla, objects). However, the gemara says that even one who needs to recite aloud for his kavana may not do so in a communal setting because it disturbs others. The Mishna Berura (101:6) posits that this problem exists even if he disturbs only his closest neighbor(s) in shul. This indeed seems obvious. If the proper thing is to be quiet and this is waived to help kavana, why would we bend the rule if it hurts another while helping him?

It is difficult to apply these rules like an exact science. Most people cannot make themselves hear and still be certain that those next to them do not hear at all. It is also difficult to know when a quiet undertone will disturb others. And what if the words are not audible, but a low hum still disturbs someone? If it is his neighbor’s over-sensitivity, then it is arguably his problem, and the neighbor should deal with it or find a different place to sit.

These are issues that are hard to quantify and their practical application are often the type of things that separate average people from those with sterling middot. One optimally should make sure that he is not disturbing others. On the other hand, the person being disturbed should try to be understanding and give the davener leeway in borderline cases.

I often recall the general concept that I heard from my Rosh Yeshiva decades ago. There is, for example, a pasuk (Shemot 22:24) that it is forbidden to harass a borrower who is having difficulty paying back. There are also severe words for a borrower who does not pay back (Tehillim 37:21). The problem is when the borrower is all too familiar with the pasuk for the lender to know, and the lender is all too familiar with the borrower’s pasuk.

Even if one may ask the audible davener to conform to the halacha, it is not always clear if and how he should do this practically. The Chazon Ish (YD 2:21) made famous the opinion that in our days we do not know how to give rebuke. I would add that our generation is particularly unsuccessful (not that it was ever easy) in accepting not only rebuke but corrections. So you must think (and/or discuss with someone who knows him better than you) how your co-worshipper will react. This may depend on how he is told – directly, with a carefully worded (anonymous?) letter, having the rabbi speak to him directly or perhaps discuss the halachot with the community. Depending on the prospects, it might be better to put up with the situation or move your seat discreetly. [For readers who practice (possibly) audible davening, please discuss the matter with someone whom you respect and avoid disturbing others and having someone approach you.]