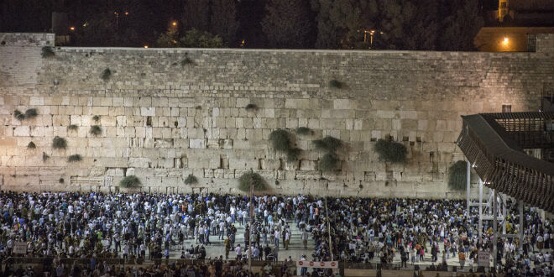 Truth is, I cheated with this one. I was looking for a responsum written on the eighteenth of Tishrei, and forgot that respondents would date it to the second or third day of Chol HaMoed (depending on whether they were inside or outside Israel). I had another responsum, and then encountered Shu”t Yabia Omer 10, Yoreh Deah 22, which was too good to pass up.

It’s not dated, but it makes reference to a Hakhel commemoration that occurred on 18 Tishrei, 5741 (1980). Since this is again a Hakhel year, I thought we’d enjoy R. Ovadya Yosef’s review of some of the central issues in the commandment.

He starts with a long quote of Rambam’s Laws of Chagigah 3;1, which lays out the obligation to gather the people in Jerusalem on the Sukkot after the shemittah year, to read them sections of the Torah that stimulate observance and strengthen connection to the true dat.

We often translate that Hebrew word as religion; I think Rambam was more focused on the belief aspect than on the set of practices and rituals many of us see as the definition of religion.

The reading took place, Rambam says, on the first day of Chol HaMoed. The king read the Torah, in the part of the Beit HaMikdash all could enter, the Ezrat Nashim. Davidic kings had the right to read sitting down, but it was considered more praiseworthy to stand. The reading (preceded and followed by birchot haTorah), started with the beginning of Devarim, went to Shema, VeHaya Im Shamo’a, skipped to Aser Te’aser (a portion we read on major holidays), and read straight through to the end of the tochacha in Ki Tavo.

Trumpets were blown throughout Jerusalem to gather people, and a large wooden stage was set up, so that the king’s voice would carry and be heard by all.

Today, R. Ovadya says, since shemittah is not Biblically obligated, there is no Temple to which to make a holiday pilgrimage, and the majority of Jews do not yet live in Israel (which may change in the next ten to twenty years), there is no way to have a Biblical Hakhel.

In other situations, we institute ceremonies zekher leMikdash, in memory of the Temple, such as when we wave the Arba Minim, the Four Species all the days of Sukkot, instead of just the one day mandated by the Torah (only in the Beit HaMikdash itself was lulav shaken for seven days). We eat maror despite the Biblical obligation applying only in the context of a korban Pesach, a Paschal sacrifice, and we donate money annually in memory of the half-shekel.

All of these examples led Aderet, R. Eliyahu-David Rabinowitz-Teomim, to argue that we should have a commemoration of Hakhel as well, as he wrote in a pamphlet titled Zekher leMikdash. A significant source for his claim is a Sifrei at the end of Ekev, which says that even in exile, we should be marked by our observance of mitzvot, so that they not be new to us when we return (this Sifrei led Ramban, I think famously and surprisingly, to say that our observance of mitzvot outside of Israel is to keep us in practice for when we return to Israel.).

Does It Have To Be the King?

If the king must be the one to read, we couldn’t have ay such ceremony today. Ha’amek Davar argues (and others but not all agree), that if the king cannot, or there is no king, some other leader of the entire people could, such as the High Priest. R. Yerucham Perla, in his edition of R. Saaday Gaon’s Sefer HaMitzvot, and Tiferet Yisrael to the seventh chapter of Sotah held that the king’s reading was a rabbinic enactment, not essential to the original ceremony.

All of this is why R. Ovadya writes of a custom (relatively new) to have a Hakhel celebration in the courtyard of the Kotel, near enough to where the Beit HaMikdash stood that the Divine Presence also never left (but with no risk of going where we are not allowed). In 2001 (Chol haMoed Sukkot 5762), more than 60,000 Jews came (including my family), in a ceremony capped by declarations of Hashem’s rule (the ones that close Yom Kippur davening, Shema, Hashem Hu HaElokim, and Hashem Melech.

Struggling With a Bracha

It’s not clear that one about to read the Torah as part of a commemorative practice can make a bracha. R. Herzog in Heichal Yitzchak suggested the person review Rambam’s Hilchot Tefillah where he records the blessings on reading the Torah, and read the blessing with Hashem’s Name. This was based on R. Yaakov Emden’s view that one who is reading any traditional text can read any mentions of Hashem’s Name in its full form. Since the prohibition against unnecessary brachot is Rabbinic, R. Herzog reasoned, R. Emden’s view is enough to rely on to allow making this bracha in this way.

Derech Pikudecha, an earlier work, had a similar idea. He ruled that if the moon was not visible until too late in the month to say Kiddush Levana, one could study the page in Sanhedrin that mentions it (42a), then read the bracha with Hashem’s Name. While our version of the Gemara does not write Hashem’s Name, Rif, Rambam, and Rosh’s version did have it, which is enough.

But Otzar HaGeonim records the view of R. Nachshon Gaon that since these texts were written at a time other than when enacting the ceremony, they did not indicate an actual recitation—to read them with the full Name, then, is saying it purposelessly. R. Ovadya sees R. Nachshon Gaon as so authoritative, he is confident R. Yaakov Emden would have withdrawn his claim had he known of it. Tashbetz, also earlier and presumptively more authoritative than R. Yaakov Emden, said that it was only Scriptural verses that appear in Rabbinic literature that we can read with Hashem’s Name, not blessings.

After rejecting another suggestion of R. Herzog’s (that any public Torah reading can include a bracha), R. Ovadya writes that no blessings were recited at the Hakhel ceremony enacted on the 18th of Tishrei 5741 (1980) —this date being my excuse for using this responsum—which had about 50,000 people present.

Even kohanim who had physical blemishes that disqualified them from Temple service could blow the trumpets to call people to Hakhel. In this regard, R. Ovadya quotes the Yerushalmi’s story of R. Akiva citing a verse to show that only kohanim who could perform Temple service could blow trumpets. Disagreeing, R. Tarfon asserts having himself seen physically blemished kohanim blow. R. Akiva suggests that that was for Hakhel, which reminds R. Tarfon that that is what had happened.

The older rabbi then praises R. Akiva for his ability to derive ideas textually yet arrive at the correct halachic conclusion. It’s a reminder of halachah’s devotion to the use of the human intellect, but in the name of reaching conclusions whose correctness or lack of it is previously decided. We’re not finding new truths, we’re (we hope) discovering old, pre-existing but hitherto unknown (or forgotten) truths. Doing that well is the highest goal of Torah study.

We allow these kohanim because actually anyone could blow for this occasion, R. Ovadya assumes, just that priests laid claim to this mitzvah—as they did with the slaughter of sacrifices, which can also be performed by non-kohanim.

R. Ovadya adds that in our times, any media for announcing the event is fine.

Hagigah 3a reports R. Elazar b. Azaryah’s teaching that little children are to be brought to the event, to earn their parents reward for bringing them. Maharsha takes that to mean children who are not yet in school, similar to a tradition of Sefer Hasidim’s, that we don’t bring such small children to shul, since they distract their parents and the community (a currently relevant topic we will not take up here). Another sefer, Bereich Yitzchak, thought the youngest would be children already six or seven, who are close enough to being educable that, depending on each one’s development, might find the event productive.

Other sources, such as Ramban and Rashi, indicate that even the smallest should be brought (Rashi explains Megillah 5a’s ruling that we delay a Hakhel that falls on Shabbat as being so that parents can carry their small children without an eruv). R. Ovadya suggests there’s a value even at that young an age, in that their ears get used to hearing Torah, as well as the benefit from being at an event where the Divine Presence is particularly present (Yevamot 64a tells us that any gathering of over 22,000 Jews has an added element of the Divine Presence).

On the other hand, Aderet wondered how hundreds or thousands of crying babies (and perhaps wet or soiled ones) could not but detract, a question R. Ovadya leaves for another time, seemingly confident that it doesn’t change the conclusion, but not sure why.

Hakhel readings are in Hebrew, which might imply that those who don’t understand (or can’t hear) need not come. R. Ovadya disagrees, based on Rambam’s specifically requiring converts to attend and pay attention, like at Sinai, despite their not knowing Hebrew. R. Ovadya adds that those who know these texts well still need to focus, because we all need the fortification of our faith that is the focus of this mitzvah.

The verse includes גרך אשר בשעריך, the stranger in your gates among the attendees. Ibn Ezra thought such a person might then become Jewish, showing that this stranger is a non-Jew, a ger toshav, because full converts are referred to as בקרב מחניך, in the midst of your camp. We’d expect conversions, R. Ovadya says, because only the hardhearted could see the wonders of such a large gathering, declaring Hashem’s Presence and power, and not want to join that people.

Hakhel: a once in seven years’ chance to be with tens of thousands of Jews, in the more direct Presence of God than usual, fortifying our own faith and others’, by listening to our leaders read crucial portions of the Torah. One of which, 35 years ago, took place on the 18th of Tishrei.