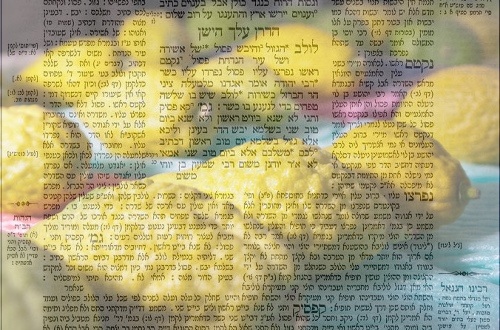 Posted by: Gil Student in From The Hashkafah Files, Magazine Oct 1, 15 3 Comments

The Torah’s command to take the four species on Sukkos is worded in a complex manner that yields halakhic nuances. However, the very identification of the different species, particularly the esrog, is at once evident and problematic, leading to a once-powerful argument for the Oral Torah that needs reevaluation today.

The Torah (Lev. 23:40) says to take a “peri eitz hadar.” The most common translation of that phrase is something like “the fruit of a beautiful tree.” Which beautiful tree?

The Rambam (Introduction to Mishnah Commentary, ed. Kafach, vol. 1 p. 9) says that a tradition from Sinai teaches us that the verse refers to an esrog. This is not a pure halakhah le-Moshe mi-Sinai, a tradition which is divorced entirely from the Bible, but one of the peirushim ha-mekubalim mi-Moshe, a tradition on the scriptural intent. According to this tradition, when the Torah says “peri eitz hadar,” it means an esrog. Any Talmudic attempts to derive this interpretation from the verse itself (Sukkah 35a) are of an asmakhta nature, a post-facto reading, rather than an original derivation. [1]See also Ibn Ezra, Lev. 23:40. The Karaites, who reject rabbinic tradition, do not even use an esrog. Indeed, it seems the Rambam and others were reacting to Karaites in their discussions of the tradition regarding the esrog.

Ramban (Lev. 23:40) takes a somewhat different approach. He says that hadar in this verse refers to a type of fruit tree that in Aramaic is called esrog, an interpretation he proves from ancient Aramaic translations. [2]Rav Sa’adia Ga’on translates likewise in his Arabic Bible called the Tafsir. Rather than attributing the identification of this fruit as a tradition, Ramban calls it a translation. That is the actual meaning of the words and not merely the referent of a somewhat vague phrase.

In some ways, Ramban is also attributing identification of the esrog to a tradition. [3]This can be seen most clearly in the comments of the Ritva (Sukkah 35a). He follows the Ramban on this (“ve-lo amar hadar levado she-hu sheim ha-esrog“) but also says that it is a … Continue reading In his case, however, he is looking to a translational tradition. But how did the earlier translators know that hadar means esrog? They must have had a tradition about the word’s meaning. If so, how do Rambam and Ramban disagree, if at all? Is it merely a matter of presentation, with the Rambam reaching straight to tradition and the Ramban utilizing a middle step of translation that ultimately leads to tradition?

Perhaps the Rambam reads the word hadar as an adjective that means “beautiful.” If so, he would disagree with the Ramban’s interpretation that reads it as a noun meaning esrog. In this way, both see the identification as a tradition. However, Ramban understands it as a translation of a biblical term while Rambam sees it as the clarification of an ambiguous phrase.

On the other hand, they could agree that hadar is a noun but disagree about a fundamental argument for the truth of the Oral Torah.

A would-be proselyte asked Shammai to convert him to Judaism even though he only accepted the Written Torah, the Bible, but not the Oral Torah. Shammai rejected him. Hillel converted him and taught him the first four letters of the Hebrew alphabet, telling him to come back the next day. When he returned, Hillel changed the order of the letters. The convert objected, to which Hilllel responded: You relied on me for the alphabet, rely on me for the Oral Torah as well (Shabbos 31a).

This was adapted into a Medieval argument in two similar ways with only a subtle difference. The Kuzari (3:35, tr. Korobkin) argues: “If, in order to pronounce and read the words of this Mosaic text, we require many traditions–such as punctuation, cantillation, sentence endings and our tradition of ‘whole’ and ‘incomplete’ words–imagine how much more we are in need of a tradition for the meaning and understanding of the text.”

The Kuzari states the need for a tradition but only implies that this tradition must be from the Sages. At the end of this section, the Kuzari points out that the Karaites–the main subject of his criticism–do not have a tradition. Again, he implies that readers of the Bible must rely on the Sages’ tradition for the meaning of the text.

The Ra’avad (Commentary at very beginning of Toras Kohanim) formulates the argument slightly differently. “The tradition,” he writes, “is primary and fundamental to all the divine commandments.” Without the tradition, we would not even be able to understand the first three words of the Torah: “Bereishis bara Elokim, in the beginning God created” (Gen. 1:1). How would we even know that Elokim is the name of the Creator? Even Hebrew, the language with which we pray to the Creator, is only received through tradition. Therefore, we have to rely on the Sages’ tradition in its complete form.

If so, the Rambam could agree with the Kuzari, that translation is part of the second half of the argument for tradition. Since Karaites reject the tradition, and therefore this argument’s conclusion, attributing the identification of the esrog to a translation serves no benefit.

The Ramban, on the other hand, could agree with the Ra’avad, that translation is part of the first half of the argument. If so, attributing the identification of the esrog to a translation should convince skeptics.

However, this entire argument is pre-modern. It assumes that we must accept the rabbinic tradition for at least the text and vowelization. Modern biblical studies do not take the Masoretic Text as a given but rather treat everything skeptically.

Perhaps the argument can be reformulated to the original Talmudic example. Hillel was speaking with someone who already accepted the Bible preserved by the rabbis and taught that if he accepts that, he should also accept the rabbinic tradition. In other words, rather than a “since” argument this can be an “if” argument. If you accept the text of the Bible as preserved by the rabbis, you should also accept the associated rabbinic traditions about its context.

The argument can still be countered. History teaches that there were multiple rabbinic traditions and even non-rabbinic traditions. Why should the argument from the biblical text support one specific rabbinic tradition? However, we have to remember that this was Hillel’s argument for the rabbinic tradition. He lived in the first century BCE, at a time when multiple Jewish sects thrived. And yet, his argument worked. If history is intended to take us back in time to the reality that existed then, it must currently be missing something. Either Hillel’s argument was illogical or contemporary historians have an imprecise understanding of the Second Temple era and the position of the Pharisaic tradition among other sects. [4]Or some may claim that Hillel never made this argument and centuries later the Talmud falsely attributed it to him. I find that claim far-fetched. If you accept the biblical text, you should accept the rabbinic tradition that was always dominant and that preserved this text.