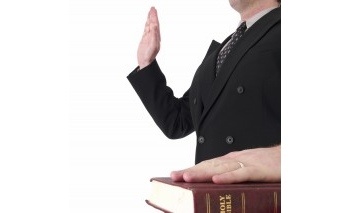 If you haven’t been in a courtroom, you’ve watched the scene dozens of times on television and in the movies. A judge calls the court to order and says to the person on the stand: “Please raise your right hand to take the oath” as a symbolic way of assuring that the expert witness, defendant or plaintiff is telling the truth. It is a statement of personal integrity that should ideally heighten the reverence for the law. Jewish writing on the subject often stresses what book the left hand is resting on rather than the significance of the right hand being raised.

Fun fact: According to NW Sidebar, a website for Washington DC’s lawyers and legal community, the raising of the right hand is attributed to 17th century London criminal courts. Judges could choose from a wide range of punishments when determining the fate of a criminal. The problem was that without a proper system of records to understand a criminal’s background, assessing a punishment – certainly one as severe as the death penalty – was itself a possible blurring of justice. To resolve this dilemma, some judges created an alternate moral problem. They branded criminals.

Sadly, it sounds just like what it is. As a leniency, a “T” may have been scorched onto a criminal’s skin for theft, an “F” for a felony and an “M” for murder. In other words, if you weren’t guilty of a capital crime, your body became your criminal record, specifically on the thumb of your right hand. Branding on the cheek, which used to be a practice, meant that a criminal’s record was open for all to see, often preventing a rehabilitated criminal from getting work. The thumb was a more sheltered place on the body. The next time you appeared in court, you were asked to raise your right hand to see if you had committed any previous crimes when you took an oath and if you were granted a leniency in an earlier case.

This thesis is entirely credible until you read that as early as the Talmud – about 2,000 years ago – people took oaths with their right hands because this practice was mentioned in the Bible. “Isn’t ‘right’ an expression of an oath?” [BT Nazir 3b]. The Talmud then continues and asks what the connection is between the right hand and an oath and cites a verse from the book of Daniel: “When he lifted up his right hand and his left hand unto heaven, and swore by Him that lives forever” [12:7]. The right hand is associated with taking an oath from this verse.

The Talmud then rejects this view and says that the right hand itself is an oath and cites yet a different proof-text from the book of Isaiah: “The Lord has sworn by His right hand” [62:8]. The Talmud also permits the use of the left hand for the taking of an oath. In other words, the critical act is the raising of the hand rather than the specific hand, according to a number of medieval commentators.

Historically, however, the right hand was always associated in the Bible and in many ancient cultures with strength because it was usually the preferred arm for use in military maneuvers. God’s strength is often referred to as coming from the right hand or arm. When Jacob places his right hand on his second grandson Ephraim (Genesis 48:14), he shows him preferential treatment as the strong one of Joseph’s sons and the natural one to inherit leadership. The right side was also regarded as a position of honor; the High Priest in the Temple always turned to the right first when encircling the altar.

This, no doubt, was a problem for lefties, who were often trained to become righties because left-handedness was associated with being weaker and even evil in some folkloric literature. My grandfather was left-handed but forced to write with his right hand to address this bias.

Dr. Erica Brown is a writer and educator who works as the scholar-in-residence for The Jewish Federation of Greater Washington and consults with for the Jewish Agency and other Jewish non-profits. She has published a number of books and writes a monthly column for The New York Jewish Week and the website Psychology Today, and a weekly column for JTA on Jewish leadership.