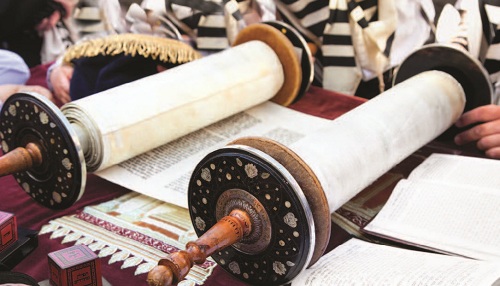 Iggerot Moshe Orach Chayyim 2;34 is dated to the 26th of Elul, 5723 (1963), about calling up someone other than a kohen to read the Torah first on a Monday or Thursday. For example, if two men had yahrzeit on the same day (which is assumed to create the right to an aliyah), one solution was to have the kohanim leave, opening that slot (and Levi as well).

Shabbat and Yom Tov, Not, As Long as the Kohen Agrees

Gittin 59 says that on Shabbat or Yom Tov, one may not give honor to a teacher or anyone else, because there are many people in attendance. That implies that it would be all right on Monday and Thursday. Tosafot quotes Rabbenu Hananel as saying that that was only in the time of the Gemara, when not as many people made it to shul during the week, because of the pressures of work . In R. Hananel and Tosafot’s time, attendance was about the same during the week as on Shabbat, so perhaps a kohen could not yield his right to be called up first even on those days.

However, R. Moshe says, the pendulum has swung back, and Monday/Thursday attendance is now sparse enough that it should be allowed. The idea that the rules change depending on attendance isn’t true of Shabbat, R. Moshe notes, because the Gemara has no such distinction. Even a shul without many attendees on Shabbat can’t use the kohen reading for others.

In addition, Rosh and Tur, quoting his father, disagreed, holding that a kohen can always forego his aliyah on a weekday, regardless of attendance, since the Gemara allowed it. Rosh and his son must have held, R. Moshe says, that we do not innovate prohibitions. Rabbenu Hananel and Tosafot, in contrast, seem to have assumed that when the Gemara said Shabbat was a problem because many people were there, that told us that whenever there are many people there, there’s a risk of fighting if that slot were not given to a kohen.

All this, R. Moshe adds, is only if the kohen agrees, is willing to forego his right. Rosh had noted that the Gemara allowed for a kohen honoring his teacher or someone of higher rank, and R. Moshe sees no reason to restrict it to them. As long as the kohen wants to do it for a yahrzeit or some other situation, that’s fine.

Maybe better, since in the yahrzeit cases, where Magen Avraham understood there to be an obligation to give them an aliyah, their need is connected to the reading of the Torah itself. If the kohen can forego his honor for the general honor of a person, all the more so in order for someone to take their rightful turn to read the Torah.

No Need for the Kohen To Leave

It’s commonly assumed that the kohen in that situation has to leave the room, but R. Moshe doesn’t think so—once the kohen has given permission, the niceties of וקדשתו, of recognizing the kohen’s special status, have been met. The reason they leave is to avoid people drawing the incorrect conclusion that there’s a problem with their lineage.

That’s why, if he’s not worried about what others will think and has given permission, Knesset haGedolah (quoted by Magen Avraham) held that the regular Jew can be called even with him present. Maharik, however, held that he should be removed, even forcibly, even by calling in governmental authorities (such as the police, I think).

This man might not care about what others will say, but Maharik worries about his children; it’s not his right to risk their reputations. That would also explain why we’re allowed to embarrass this kohen by forcibly removing him, to protect him from damaging his descendants. Since he has no right to do that, this is like forcing him to refrain from violating a prohibition, which is a well-recognized halachic right.

Some places had the custom to sell the first reading of the first parasha, the first public Torah reading slot of the year, with the money going for the shul’s needs. That was where Maharik and Knesset haGedolah disagreed. In that case, R. Moshe notes, the kohen clearly has not willingly foregone his honor, and it’s on Shabbat, when the Gemara had said we can’t do this anyway.

The holiness of Shabbat would seem to mean we should be extra careful about avoiding disputes, similar to the Mishnah in the fourth chapter of Demai that allows believing someone on Shabbat whom we would not believe during the week. Rambam and Bartenura explain that Shabbat is so serious in people’s eyes that they would not lie. Let’s pause to imagine a world where those not generally all that exacting in their observance, either of the laws of tithing or of lying, yet have such respect and awe of Shabbat that they would not lie on that day!

Needless disputes are also more serious on Shabbat, R. Moshe says, and therefore we should presumably be more careful about them, and avoid leading to a situation where a kohen might object. How can we sell his aliyah on Shabbat Bereshit?

The Leader of the Generation

The answer is found in another discussion, of whether the gadol hador, the Torah giant of a generation, could take that reading, with or without the kohen’s acquiescence. While we now follow the custom of R. Amram and R. Natronai Gaon that kohanim don’t yield to their teachers or to other Torah scholars, Tosafot and Rosh held that a scholar like Rav Huna, the leader of his generation, would today still have the right to be called first.

To explain that view (which will lead us back to Shabbat Bereshit), R. Moshe points out that we honor Torah scholars for their personal Torah knowledge, but honor kohanim as a function of their lineage. That being true, it makes sense that a Torah scholar has the right to forego his honor, but not the kohen. For those who deny that right even to Torah scholars, R. Moshe suggests that that would be because the Gemara calls them kings, and kings in fact may not forego their honor. Or, perhaps, this view means only that one’s personal rebbe cannot forego it, because the student’s obligation to honor his teacher is independent of the rebbe’s right to it.

Given those distinctions, when the honor is personal, such as to whom to give charity first, or to whom to respond if two people ask a question at the same time, the Torah scholar should go first, regardless of problems in his lineage. But public Torah reading is a public matter, fixed for all kohanim throughout history. There, the tribal honor of the kohanim overrode the personal honor of the Torah scholar.

Honoring the Torah by Honoring a Person

Except that the honor due the generation’s leading Torah scholar is not just personal, and Tosafot and Rosh could have held that his honor outweighs theirs. R. Moshe doesn’t elaborate, but I think he is implying that there’s an institutional element to this scholar; his level of knowledge has made honoring him, in some sense, the same as honoring the Torah itself.

My teacher, R. Ezra Bick, once told me that R. Akiva Eiger once said that in his generation, he was the honor of Torah. [It’s too long to go into, but trust me that in context there was nothing haughty or arrogant about saying it]. That would fit R. Moshe’s idea.

What about those who disagree? Here again, R. Moshe invokes the idea of those not present. This generation of kohanim owes honor to this Torah giant, but not the preceding generations, all the way back to Aharon. Their honor, too, is tied up in each instance of giving the first Torah reading to a kohen. That would be why R. Amram Gaon and R. Natronai ruled that even in such situations, the Torah scholar cannot simply take that spot.

That opens an explanation for selling the first reading of Bereshit even against the kohen’s will, since that’s an honor to Torah itself, showing that the importance of being called up for the first reading of the year is worth so much money to people. Honor to Torah itself outweighs the honor even of all generations of kohanim, which is why it can be done even against their will.

Honor comes in lots of types, R. Moshe is suggesting, and knowing whether it’s personal, tribal, honor to the Torah itself, linked to that generation or all generations is crucial to sorting out when it can be foregone or suspended, even against the will of the person involved.