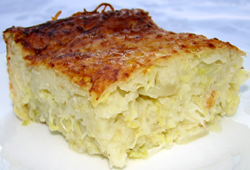 Question: Before our shul Kiddush, gabbaim noticed the hot plate (for kugel) was unplugged, so they had a non-Jew connect it (I don’t know what they told him). I ate the kugel only after it cooled down. Was that necessary/allowed?

Answer: When a non-Jew does melacha on behalf of Jews, even without prompting, they may not benefit from it (Beitza 24b). While this suggests your compromise was right, we must consider various factors pointing to other conclusions.

First, might one be allowed to ask a non-Jew to plug in the hot plate, even though this is a Torah-level melacha? After all, the Rama (Orach Chayim 276:2) cites the minhag of some to have a non-Jew light a candle for a Shabbat meal because a proper Shabbat meal is a mitzva, and this includes having hot food (Mishna Berura 325:60). Where need justifies asking a non-Jew, benefit is also permitted. While the Rama condones this approach only for exceptional need, the Mishna Berura (276:25) permits it for a mitzva of the masses. However, heating up kugel is not critical for a shul Kiddush at least under normal circumstances.

A more promising way to use the non-Jew is with a “good hint.” A regular hint made to him on Shabbat to do melacha on Shabbat is forbidden (Rama, OC 307:22). However, Acharonim rule that a hint that mentions only a need without mentioning any action is permitted (Magen Avraham 307:20; Mishna Berura 307:76). Poskim point out that, for several reasons, this leniency cannot obviate the whole prohibition of amira l’nochri for those who use good hints (see Orchot Shabbat 23:(24)). However, some serious poskim permit it when the non-Jew’s action provides no “halachic benefit” (see Shemirat Shabbat K’hilchata (30:3). Does heating up a fully cooked kugel provide halachic benefit?

When usage of an object is possible (a hard word to define) without the melacha, it is not considered benefit. One application is that if a non-Jew lights a second candle, it is permitted to do things that could have been done, even with difficulty, with the first light alone (Shulchan Aruch, OC 276:4; see Mishna Berura ad loc. 20). Arguably, since (almost any) kugel can be eaten at room temperature, heating it up is not benefit. On the other hand, Igrot Moshe (YD III:43) limits this leniency to cases where the benefit (e.g., light) is provided by a different object (e.g., candle #1); one may not receive benefit (e.g., coolness) provided only by a non-Jew’s melacha (e.g., putting on an air-conditioner) even if one can do the same thing (e.g., eat in the room) without that benefit. Rav Auerbach argues similarly and also distinguishes between Torah-level and Rabbinic melachot (see Shemirat Shabbat K’hilchata 30:(167)). If this is correct, then when the non-Jew provides all the re-heating by plugging in the hot plate, a good hint would not help. (How one deals with the apparent contradiction regarding using shoes that a non-Jew finished preparing on Shabbat – see Mishna Berura 252:30, 327:16, and 253:98 (below) – may be crucial). Without exhausting the topic, it is questionable whether a good hint would allow heating up the kugel.

Does letting the kugel cool off solve the problem? The Rashba (cited by Beit Yosef, OC 253) discusses (almost exactly) our case and forbids eating the food even after it cools down (see Minchat Shlomo I:5), as a penalty for one who violated the rules of amira l’nochri. While the Rama (OC 253:5) paskens like the Rashba in a slightly modified case, the Mishna Berura (ad loc. 98) limits the stringency to the part of the food that is not readily eaten cold (unlike most kugels). The Rashba himself refers to a case where the Jew knew he was acting improperly.

We summarize as follows. It is unclear whether heating up kugel is halachic benefit, which determines whether one could have eaten it warm, irrespective of the gabbai’s action’s propriety. Eating it after it cooled off was permitted if the gabbai believed (all the more so, if he might have been correct – see Mishna Berura 318:2) he was acting correctly.