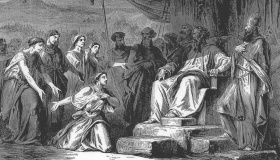 R. Ysoscher Katz, in an attempted rebuttal to Rav Hershel Schachter’s responsum on girls wearing tefillin, offered a number of arguments. In the past, we examined his claim that Rashi held the bar low for issuing halakhic rulings (link). Here I would like to discuss his statement that Tzelofchad’s daughters successfully requested equal inheritance rights, thereby contradicting Rav Schachter’s claim that this was a Sadducee, and therefore inappropriate, endeavor.

In the English translation of R. Katz’s letter, he writes (link):

With apologies to Kevod HaRav, the Sadducees were not the first to complain about discrimination against women in issues of inheritance; they were preceded by hundreds of years by the daughters of Zelaphchad who complained (Num 27:4) “Why should the name of our father be lost among his family because he had no son? Give us a possession among the brothers of our father.” And in the language of the Sifre “Their eyes saw that which Moses’ eyes did not see” (that is that there are times when women can see something that even someone as great as Moses, who spoke with the Shechina “mouth to mouth,” did not see.) And God consented to their words unequivocally: “Correctly have the daughters of Zelaphchad spoken.” God listened to their claim (“God conceded the truth!” Avot D’Rebbe Natan Ch. 37) and changed the laws of inheritance to make them more egalitarian (relatively, as should be understood)

The projected allotment of the land causes the five daughters of Zelophehad to plead equal treatment for themselves and raises the question of inheritance by women.

It is a story of women appealing for equal justice and, within the cultural norms of their world, receiving satisfaction–at the explicit instruction of God!

The difficulty with this reading is that the text has the women complaining about their father’s rights, not their own. As R. Katz quotes, the daughters ask (Num. 27:4): “Why should the name of our father be lost among his family because he had no son?” Their entire request was that their father’s name be continued, in this case through them due to lack of any sons. They did not complain about discrimination against women but discrimination against a man with only daughters.

From a literary perspective, the emphasis in the entire passage is on male inheritance. Robert Alter, in his The Five Books of Moses (p. 866), points this out:

This is not a case of women achieving inheritance rights but an exceptional case that allows the father’s rights to continue through his daughter’s sons. [1]Jacob Milgrom, The JPS Torah Commentary, Num. 27:8 intro, writes: “The daughter does not really inherit; she transfers the inheritance from father to grandson and thereby keeps the ancestral … Continue reading

Perhaps the most direct treatment of this subject from a rabbinic perspective was written by R. Elchanan Samet, first published online in Hebrew (link) and abridged in English (link), and then in a final form in his Iyunim Be-Farashos Ha-Shavu’a (first series, Jerusalem, 2002, vol. 2, pp. 248-261). He attempts to address the feminist aspects of this passage from an unbiased perspective, or at least as unbiased as anyone can be. His conclusions are ably summarized by R. Hayyim Angel, in the latter’s A Synagogue Companion (p. 160):

The daughters of Zelophehad were not motivated by their own rights, nor was equality of inheritance rights for women what lay at the root of their demands. In fact, their argument is deeply rooted in a patriarchal social structure.

Nonetheless, at the root of their argument, and in its acceptance by God, lies a basic principle connected to the inherent equality of the sexes. The daughters of Zelophehad point out an injustice, that because of the laws of inheritance whereby only males inherit, their father’s name will be eliminated from within his family. They argue that the principle of preserving a man’s name should take precedence over the laws of inheritance.

On a basic human level, a man who has children, whether male or female understand that he has in fact achieved continuity. This continuity is a fact stronger than any social order that gives precedence to one sex or another.

In other words, while there is a level of some feminist theory–of equality of men and women–in this passage, it is not on the level that R. Katz claims. Tzelofchad’s daughters do not “complain about discrimination against women in issues of inheritance.”

Certainly, the Sages were concerned with the welfare of women in regards to inheritance. However, their response was not to legislate equality. In Talmudic times, when the patriarchal family structure of the Bible was no longer strong enough to protect orphaned daughters financially, the Sages required the inheriting sons to provide maintenance for their sisters. And if the funds were insufficient, the daughters’ claims had priority — the sons had to provide for their sisters and, if need be, collect charity to support themselves (Kesubos 108b).

Centuries later, when this proved insufficient, a new method was devised to ensure the financial security of orphaned daughters. Fathers were given the option to create a debt to their daughters so that they would inherit a portion of the estate (this is called a shtar chatzi zakhar and is discussed extensively by later authorities). Rather than legislating equality, sameness, the sages throughout the generations sought to protect the female heirs even at the expense of the men. Men and women are all created in God’s image but that does not mean that their roles must be exactly the same.