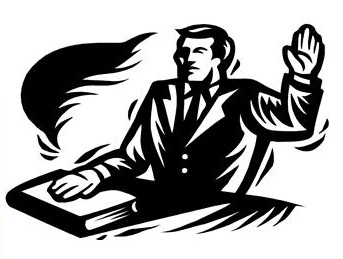 R. Yitzchak Elchanan Spektor was one of if not the foremost rabbinic authority of the late 19th century. Ein Yitzchak 1; Even HaEzer 43 records the response he wrote, on the fourteenth of Av, 5626 (1866), about a woman who remarried based on the testimony of a thirteen year old, who claimed to have heard a non-Jew telling of two Jews who had been kidnapped, taken to a forest, and killed. One of the Jews in the story was clearly identified; the other had the same name as this woman’s husband, and the non-Jew had mentioned some identifying features, but not any specific enough to constitute an halachically valid identification.

The assumption of the question is that a court would not have accepted that as sufficient to allow her to remarry. But she didn’t ask, the question is whether the court must require her to separate from this second husband. The questioner wanted to rule leniently, an instinct R. Spektor praises. Now he has to deal with the halachictechnicalities to see if he can support that instinct.

The Physical Maturity of the Jewish Witness

A valid witness in halachah ordinarily has to have matured to adulthood physically as well as chronologically. This boy was not checked for that at the time his testimony was taken, but R. Spektor thinks there is still room to accept his evidence.

He notes that Ran and Maggid Mishneh think a minor is believed to say that a woman who had been taken captive was not raped (necessary in order to allow a kohen’s wife to return to that marriage once she was freed), all the more so that they would accept the minor’s testimony regarding the death of a missing husband. After all, we do not accept a non-Jew’s word about a captive woman, even when that non-Jew is מסיח לפי תומו, telling a story without realizing why we care about its details, but we do accept such revelations about a Jew’s death.

R. Spektor further notes that the second view in Shulchan Aruch Choshen Mishpat 7;3 accepts a thirteen year old boy as a judge in monetary cases even without proof that he’s reached physical maturity. While the Tumim (R. Yonatan Eybeschuetz) held that was because the need for three judges is only rabbinic, R. Spektor disagrees, and says that Torah law necessitates three judges. Yet the thirteen year old qualifies; that, he thinks, is the consensus of later authorities.

If a thirteen year old can judge, and a woman cannot, and yet a woman is believed as to the death of her husband, certainly the teen would be. This is all the more true since some rishonim seem willing to accept the testimony of an actual minor, let alone here, where our doubt stems only from the failure to check the minor’s maturity. And the woman has already remarried.

The Gemara enunciates a חזקה דרבא, a presumption that children who reach the age of majority have also attained the requisite physical maturity. Once so presumed, we are not obligated to worry about the minority who do not fit that profile; if so, this thirteen year old’s testimony is valid, and she can stay married. R. Spektor supports that by noting that some rishonim allow a woman to stay in her second marriage wherever the worry about whether the first marriage ended is an unlikely minority case, including if the husband disappeared in מים שאין להם סוף, an ocean whose ends we cannot see.

What Makes a Majority View?

A side issue is whether we can call it the consensus view if authorities’ reasoning differs (Shach to Choshen Mishpat 25 had said we cannot). In our case, some authorities felt that the possibility that the boy had not reached physical maturity was so uncommon as to be insignificant, while others thought that even if it was common enough to matter, she was still allowed to stay married once she had done so.

R. Spektor says, first, they’re all still basically relying on the majority of thirteen year olds’ having reached sufficient physical maturity. Besides, Shach’s comment applied to Biblical issues, not rabbinic ones; in rabbinic concerns (which is what we have here), we can group supporting authorities even if they differ on the reasons for their ruling.

The Words of a Minor or a Non-Jew

R. Spektor also suggests room to accept a minor’s testimony on these issues. Taz to Even HaEzer 17;9 says that a child who already understands the basics of ownership and transfer of possession—somewhere between the age of six and majority– can testify who is a brother of the deceased for the purposes of yibum or chalitzah. If so, the minor should be able to verify the death of a husband.

In our case, however, the minor didn’t see it, he’s reporting someone else’s words.  In those other cases, one factor allowing us to believe the minor was that his story could eventually be proven true or false; with the minor reporting what he heard, even if the allegedly deceased man shows up, he might still have heard that from the non-Jew. That makes us less able to accept his word. But, as R. Spektor already said, we don’t here have to assume the boy is a minor.

What the Non-Jew Tells Us

We do have to wonder whether we’re allowed to believe the non-Jew, once we grant that the boy has told us what the non-Jew said. In this case, he identified one victim fully, and the other Jew, a R. Yehoshua, with less clarity. This woman’s first husband, named Yehoshua, was known to have been traveling with that other Jew, and to have been captured with him.

Maset Binyamin 44 (1530-1620) ruled that if a non-Jew told us the exact identity of one member of a group and that the whole group had been killed, we are allowed to assume the deaths of anyone we know to have been part of that group (we don’t have to worry that some members of the group split off before the rest’s sad end).

Let’s pause to remember centuries when Jews encountered such situations frequently enough to have established law on what happened when a whole group was killed, but the identity of only one victim was well known. And hope that we never are forced to deal with such situations in our lives or in the lives of people we know.

Unfortunately, Taz did not accept that view, so R. Spektor finds another route to leniency. Noda Biyehuda Mahadura Tinyana 55 ruled that a medium identification sign is better than knowing the father’s name. In our case, while the non-Jew didn’t know the father’s name of the second victim, he did know the whole group had been put to death, and knew several lesser identifying facts about the deceased. All of that, R. Spektor argues, is as good as knowing a last name.

What Counts as War?

One last sticking point is that in times of war, we are more exacting about the signs we require—since so  many people are being killed, we worry someone very similar to the person we are concerned about was killed.

Although this happened in a time of war (as of 1864, R. Yitzchak Elchanan was the rabbi of Kovno, in Lithuania; in 1863, an insurrection had started in Lithuania and Poland; this question seems to refer to an event that happened in the course of that insurrection), and the men reported dead had left with the plan to fight any enemies they encountered, their demise came at the hands of highwaymen, not fighters in that war. For that reason, R. Spektor rules that it can be treated as an ordinary death case, requiring only the lower standard of identification.

Sum total, he agrees that this woman can stay with her second husband. More, he believes that the testimony in this case sufficed to allow her to marry—he isn’t allowing this after the fact, he’s acknowledging that she had enough evidence and information to remarry in the first place.