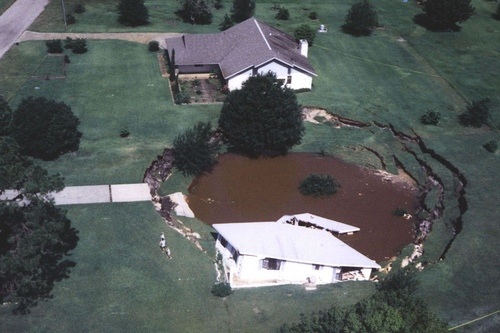 Was Korach Swallowed By A Miracle?

The dramatic demise of Korach and his fellow rebels reads like a spectacular miracle. “The earth opened its mouth and swallowed them and their houses, along with all the men who were with Korach and their property” (Num. 16:32). [1]Although exactly who died this way is unclear. R. Aryeh Kaplan writes in a footnote to The Living Torah: “According to some, Korach himself was not swallowed up (Sanhedrin 110a) but was killed … Continue reading However, at least one important commentator reads this punishment as a natural occurrence. This not only leads to textual difficulties but also to a theological problem. A more precise understanding of the nature of miracles will help us understand this approach.

I. The Natural Approach

When Moshe suggests that God will open up the earth to swallow these rebels, he uses the term “yivra, will create” (Num. 17:30). Ibn Ezra explains that the root “bara” means to form. [2]Consistent with his explanation of Gen. 1:1. In this case, the people fell into some sort of a sinkhole that, Ibn Ezra states, is common. God formed a sinkhole under the people.

Korah, Dathan and Abiram’s tents were pitched on a kewir, that is a mud-flat hard on the surface and boggy underneath. If the crust of a kewir breaks up, those on it would be swallowed up in the mud much as described in our story. Such kewirs are found in the Arabah, which stretches from the Dead Sea to the Red Sea.

However, Ramban (ad loc.) disagrees on two points. First, “bara” means a new creation. [3]I will not elaborate here on the issue of special creation but see Ha-Kesav Ve-Ha-Kabbalah (ad loc.) who grapples with it. Second, this must have been a supernatural phenomenon since the earth closed again over those who were swallowed up (v. 33). A sinkhole or kewir does not close up again over people. [4]Milgrom reads Ramban as saying that the opening of the earth is natural and its closing is supernatural. I think Ramban is saying that from the closing, we see that the entire phenomenon is … Continue reading

I add that the Mishnah (Avos 5:6) lists this “mouth of the earth” that swallowed Korach as one of the ten things created at the very end of the sixth day of Creation. If it is just a natural phenomenon, why was it a special creation? I believe the answer to this question can be found in another question.

Mendelssohn’s Bi’ur (ad loc.) quotes the Ramban’s questions and adds another proof that this was a supernatural phenomenon: the earth split on Moshe’s command. Clearly that is not a natural sinkhole. However, this question fails to account for the nature of miracles. [5]I would phrase this stronger but I believe the Tur Ha-Arukh (ad loc.) makes this same point.

At the end of his treatise on Resurrection, Rambam distinguishes between two types of miracles. [6]He must have been a Brisker. Supernatural miracles defy the laws of nature. With them, God demonstrates His mastery over the universe. Natural miracles are not inherently surprising except in either their timing, their extreme effectiveness or their persistence. Locust swarms happen but the swarm in Exodus (10:24) was uniquely powerful. In this discussion, the Rambam sides with the Ramban and counts the earth swallowing Korach as a supernatural miracle.

In The Emergence of Ethical Man (p. 187ff.), Rav Joseph B. Soloveitchik emphasizes the first, natural type of miracle, without denying the supernatural. He writes (p. 187-188):

All archeologists agree that the [ten] plagues as depicted by the Bible are very closely related to the geographical and climatic conditions that prevail in Egypt. Behind the passages in the Bible we may discern a distinct intention to describe the plagues as naturally as possible. The Bible never emphasizes the unnaturalness of the events; only its intensity and force are emphasized. [7]We have discussed this passage multiple times on this website.

According to Ibn Ezra, the earth swallowing Korach and his followers could still have been a miracle even if it was natural. The miracle is not in the what happened but when, its timing. The miracle is that the earth under these rebels split open at exactly the right time to enact divine justice.
Ibn Ezra might also believe that this event was pre-programmed at the time of Creation. A natural occurrence is a part of nature and was created with nature. Therefore, the Mishnah could justifiably say that this natural sinkhole was created on the sixth day of Creation, pre-arranged to coincide with Moshe’s challenge. [8]See Meiri’s commentary on the Mishnah for another possible approach.

If so, the question in Mendelssohn’s Bi’ur misses the point. The earth’s swallowing up Korach on Moshe’s command does not prove that it was a supernatural miracle. If anything, it is further indication of a natural miracle.