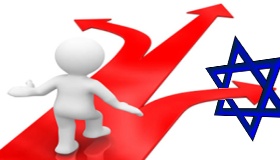 Conversions for the Sake of Marriage

24 Sivan: R. Kook’s Opposition to Conversions for the Sake of Marriage

The question of whether to convert the non-Jewish half of a couple for the sake of marriage has been dealt with many times, and the consensus among reputable decisors of halachah seems to have become that there is almost always room to allow for it, especially if the rabbi involved in the conversion becomes convinced of the convert’s sincerity and intent to adhere to Jewish standards of behavior. But on the 24th of Sivan, 1928, R. Kook, Shu”t Da’at Kohen 155 took a decidedly different view.

I don’t want to imply, by reviewing R. Kook’s responsum, that I think we should anything about converts differently than the consensus is today. I review it for three other reasons: 1) it’s the responsum from 24 Sivan that most interested me, 2) it is an example—there are more than a few, and I am by no means the first to notice them— of the fact that the dominant picture of R. Kook as tolerant and welcoming needs more nuance, to incorporate his specific halachic positions, and 3) it also an example of where a less-than-ideal situation becomes so normal that we forget how less than ideal it is.

Reviewing R. Kook’s opposition will remind us that the plain sense of traditional sources was that such marriages should not occur, thus reminding us that even granting that where we are is an appropriate place to be, it comes with certain costs we would do well to bear in mind.

R. Kook opens with an expression of surprise at the question, since a clear Tosefta in the fourth chapter of Yevamot says that a Jew (man or woman) may not marry a non-Jew with whom the Jew was romantically linked before the conversion.

The conversion itself is not simple, either. Rambam, Laws of Prohibited Relations 13;15, rules that anyone who converts for any ulterior motive does not qualify as a righteous convert.  In the times of Kings David and Shlomo, when the Jewish State was so ascendant that any conversion was suspect, proper courts did not accept converts. Those converted by people not aware of this led to a continuing worry by the expert courts.

They wouldn’t reject the converts once they had immersed, but they wouldn’t work to bring them close until the course of that convert’s life’s journey showed that he or she had become a fully sincere convert, independent of the original motive. Rambam repeats that view in paragraph 17, that once a person has immersed for conversion, we wait to see how it turns out.

No Need for Divorce

His reference to clarifying their status reads to R. Kook as saying that they should not marry Jews until then, either. Anyone able to protest should do so, but if unqualified people perform such marriages, we do not work to separate the couple. He adds that it’s so obvious that no court should convert such people and then marry them that there’s no need to elaborate. (Obviously, other rabbis found much room in these same facts for different conclusions—for example, if one extended the conversion process until it was clear the convert was fully sincere, there’s room to argue that that should suffice, as many have).

Where he sees room for discussion is in how to handle a Jew who was warned against entering such a marriage and did so anyway—is the malfeasance significant enough to lead us to tell the couple to divorce?

R. Kook rules that we do not, based on Bach, who said that courts only push divorce when the continuing relationship involves continuing prohibitions (such as a woman who married the man with whom she had committed adultery). Here, where the problem is only the appearance that the conversion was invalid, Bach did not necessarily require divorce.

Let’s be sure we not miss the implications. R. Kook understood Rambam to have indicated that a conversion for ulterior motives (including power, money, or marriage) was invalid until the convert became sincerely desirous of serving Hashem independent of those motives. He infers that from Rambam writing that the court would watch the converts to see if they had become sincere. If they remained insincere, R. Kook says, they are not actually Jewish (conversion is not a ritual, it’s a combination of ritual and internal change; without both parts, it’s not conversion).

R. Kook raises another question, based on Shu”t Mabit 1;187, who said we only push divorce if there’s a problem unique to this relationship; if a partner to this marriage cannot get married even after exiting the relationship, we would not work to have them divorce.

Mabit’s case was a woman whose husband disappeared at sea, where the wife is not supposed to remarry until there is eyewitness testimony (today, some other evidence is accepted as well) to his death. If she remarries anyway, Mabit thinks we would not push her to divorce, since we have no reason to think she will ever be able to remarry—better to let her stay in this (wrong) situation, which might be ok (if the husband is in fact deceased) than to take action to strand her forever.

In the convert case, R. Kook says, that shouldn’t be true—the convert’s marrying this person taints the conversion, makes us think it was only for the marriage. But if they divorce, the convert might become fully sincere and could then marry other Jews. So R. Kook isn’t fully sure—the problem in this marriage is not a continuing prohibition, it’s what the marriage says about the conversion, but on the other hand, the reason not to force divorce on those who married wrongly is that the partners can then never remarry, whereas these two could.

Should We Work to Stop It Before It Happens?

Mabit also writes that if the spouse is lost at sea, the court does not have to warn the surviving spouse ahead of time not to remarry. If she comes to ask, the court cannot give permission, but it does not need to work to avoid such marriages. R. Kook thinks this is a general principle.

That’s a bit odd, since the Yerushalmi that was the source for much of this discussion speaks of the court telling a couple not to marry; for Mabit, we’d have to assume the court either acted overzealously (which R. Kook prefers not to assume—if the court acted wrongly, we’d expect/ hope Yerushalmi would note that) or that the couple came to consult of their own volition.

Except that R. Kook thinks Mabit only ruled that way because it was common knowledge that being lost at sea did not free a spouse for remarriage, or that it was the kind of case where people would generally consult, so there was no need to publicize the prohibition. In cases where that’s not true, and all the more so (says R. Kook) when some who are called rabbis violate halachah without qualm, all need to stand in the breach, to try to uphold the words of the Sages.

On Fighting, Giving In, and the World We Help Create

Since important other halachic authorities came to differ with R. Kook (such as, I believe, R. Chaim Ozer Grodzinski and R. Herzog), the responsum highlights the challenges in evaluating the propriety of conversion, and the importance of making that evaluation.  It’s not a question of whether a conversion is ideal, but—sometimes—whether it would be valid at all.

More generally, it calls us to consider what happens when a Talmudic ideal is set aside, even if that was the right course of action at the time.  The Gemara clearly understood conversion to be ideal only when the convert was motivated solely by the desire to join the Jewish people.

Once it became accepted to widen the pool, to allow converts with other motives as well, what does that show? Some, I think, would argue that it shows that mixed motives might end up ok (I know people who I think of as completely righteous converts, even as their original motivation was almost definitely at best mixed).

At the same time, it would seem to me it still contributes to a blurring of our awareness of the meaning of conversion. For all that some such people become full righteous converts, that should not let us believe that an insincere conversion is fine, because who knows where it will lead.

That’s not to ignore the complications that led other poskim to rule differently, and maybe their perspective was broader and more effective. It’s only to say that R. Kook’s take lets us see the issues at stake, even if the halachic consensus eventually decided to take in these converts, and to hope that they all are or become sincere and valuable members of the Jewish people.

2015-06-12
Gidon Rothstein
Previous: Who Removes Sleep From My Eyes
Next: Daily Reyd