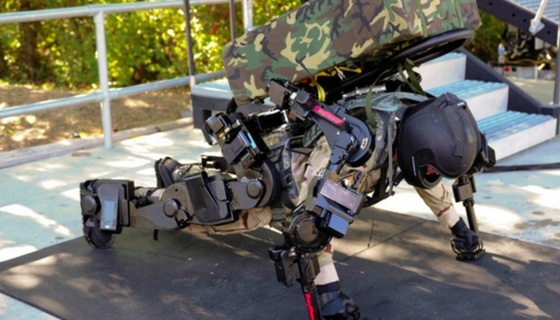 Posted by: Gil Student in Halachah Musings, Magazine May 5, 15 6 Comments

Reports, albeit somewhat dubious, are circulating regarding Russian development of combat exoskeletons that can mechanically increase the strength and endurance of soldiers. Worn like body armor, these artificial extensions of the body are expected, within five years, to receive direction through brain waves. When a soldier thinks about moving his arm or leg, the mechanical extension will move, thereby multiplying the soldier’s strength. While combat is almost always a case of life-threatening danger that overrides the rules of Shabbos, the tantalizing reports still raise the question of whether such technology can be used on Shabbos in non-combat situations.

The basic technology already exists. Computers have already been developed that can receive instructions through brain waves. This Brain Computer Interface (BCI) technology currently requires direct contact with the skull but the possibility of remote connection, a sort of brain wifi, is certainly conceivable. I’m hardly an expert so it may already exist and I just do not know about it. I see three questions related to Shabbos with this technology.

First, can we use BCI to perform a forbidden labor? Can I command, through my thoughts, a plow to plow my field or my coffee maker to brew me fresh coffee? Second, can I use this technology to utilize a machine to do something that is not otherwise forbidden, such as turning the page in a book or lifting a fork full of food? (We’ll get to the third question at the end of this essay).

Rav Shlomo Zalman Auerbach was asked this question, apparently multiple times. He believed that there is a Talmudic precedent for prohibiting an activity on Shabbos that is done through thought (beyond thinking about business and similar thoughts, which is a separate issue). R. Zalman Menachem Koren, the editor of Rav Auerbach’s writings on electricity (Me’orei Eish Ha-Shalem, vol. 2 pp. 765-766), discusses Rav Auerbach’s oral response. Rav Auerbach pointed to the prohibition against designating food as terumah, the portion given to priests and forbidden to others, on Shabbos (Tosafos, Gittin 31a sv. be-machashavah). Even an activity that consists of thought can be forbidden.

In one of his earliest writings (Me’orei Eish, ch. 4), Rav Auerbach quotes a responsum by Rav Avraham Walkin (Zekan Aharon vol. 1 no. 15), in which the author argued that someone who miraculously cooks through thought or speech violates a biblical prohibition. Rav Walkin proves this from the man (manna) that the Jews are in the Desert. The Torah (Ex. 16:23) forbids cooking the man on Shabbos. However, the man required no preparation–you merely thought what you want and it tasted that way. Clearly, Rav Walkin argues, cooking through thought is biblically forbidden. Rav Auerbach rejects this entire line of argument (although not necessarily the conclusion) because the Torah only forbids cooking with fire, not miraculous cooking. Whatever you may be doing wrong by thinking man to be cooked, it isn’t cooking.

Rav Yisrael Rosen (Be-Chatzros Beis Hashem, p. 90) writes that he asked Rav Auerbach the same question and received the same answer about designating terumah. However, Rav Rosen challenges this proof. He points out that designating terumah violates the rabbinic prohibition of fixing an object. If so, it is not a Shabbos rule that thought can violate the prohibition but a function of designating terumah. Since the rules of terumah allow thought, the food is “fixed” and the Shabbos rules are violated. There is no general rule here to be extracted that Shabbos can be violated by thought.

Rav Rosen quotes Rav Meir Dan Plotzki (Keli Chemdah, Beshalach) who also attempts to prove from the cooking of the man that a forbidden labor caused by thought is prohibited. However, Rav Auerbach’s above objection should apply similarly. Rav Plotzki also gets philosophical. He points out that on Shabbos, we rest like God did after creating the world. Since God created the world through thought, a labor that is caused by thought is also forbidden. Although one can counter that God created the world through speech, it is not clear to me whether divine speech and divine thought are distinct.

Rav Rosen briefly raises the idea that performing a forbidden activity through thought is comparable to performing it using supernatural powers. For example, killing someone by invoking God’s name or writing by asking a question of the Urim Ve-Tumim. If directly causing a labor by speaking is allowed, then certainly causing it by thinking is permitted. Rav Shay Schachter advances this argument in a recent lecture, citing many more examples. He quotes a responsum by Rav Chaim Palaggi (Lev Chaim, vol. 2 OC 188), in which the author permits extinguishing a fire on Shabbos supernaturally (with a segulah), such as reciting Psalm 98.

I believe his father, Rav Hershel Schachter, implies such a position in an article. In Be-Ikvei Ha-Tzon (p. 47), the senior Rav Schachter writes in regard to gerama and what is required for an act to be forbidden on Shabbos:

Maybe I am overreading this brief phrase but I think it might permit otherwise forbidden activities caused by thought.

However, Rav Asher Weiss (in an online essay, perhaps from his book on Exodus), rejects the comparison to miracles offered by the younger Rav Schachter. Rav Weiss argues that miraculous and supernatural actions are inherently different from natural causation. A supernatural activity is really caused by God, not man, and therefore is permitted. But when a person directly causes a forbidden activity, even if just by thinking, then it makes sense to say that he has effectively pushed the plow himself.

However, lacking a definitive proof, Rav Weiss hedges, saying that at best causing a forbidden activity by thinking constitutes gerama, which is rabbinically forbidden except in exigent circumstances. He concludes that whether this constitutes direct or indirect labor requires more study, but it is definitely forbidden under normal circumstances.

However, this discussion only answers the first question: can you use thought to perform a forbidden action? Regarding an electronic prosthetic limb, the issue turns to whether you may use thought to move an electronic device. It is not entirely the same for two reasons:

First, electronic motion may be only rabbinically prohibited. Second, and perhaps more importantly, the device itself might be considered part of the person, which brings us to the third question: what is the distinction between a person and the machines he uses? Some today argue to an extreme that your computers are an extension of your own mind. More moderate thinkers suggest that artificial appendages become part of you. Is a hearing aid distinct from you? A pacemaker? An artificial heart? If an artificial limb is considered part of you, then you may use it on Shabbos like you use your arm.

Personally, I’m a simple man and look at the issue simply. If it’s organic then it is part of you, even a donated organ and even if grown in a laboratory. If it is inorganic, even partially, then it is not part of you. If and when they make completely organic computers, then maybe that can become part of you, as well. I am not a halakhic authority so my conclusions are tentative and should not be followed. But it would seem that this line of thinking implies that artificial body parts that violate rabbinic Shabbos prohibitions (absent the considerations of thought, discussed above) may only be used by someone who would otherwise be defined as ill but not life threatening. Similarly, artificial body parts that violate biblical prohibitions may only be used by someone who would otherwise be in a life threatening situation. I am not aware what halakhic authorities have said on this subject. (In short, the Bionic Man is assur according to some authorities.)

When it comes to exoskeletons, we have to ask whether they are external to the human body. If they are, as I suggest, then we arrive at the dispute above. According to Rav Shlomo Zalman Auerbach and Rav Asher Weiss, they are forbidden. According to Rav Shay Schachter and possibly his father, Rav Hershel Schachter, this might be allowed (I did not hear the younger Rav Schachter reach a definitive conclusion). Rav Rosen also seems to lean toward leniency but does not reach a final conclusion.