Scrolling Down the Pages of Jewish History 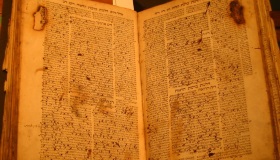 This story appears in R. Yechiel Spero’s Pesach Haggadah: Touched by Our Story (pp. 88-91) and is republished here with permission from the copyright holders (Arstcroll / Mesorah Publications, Ltd.). The pictures below — of the Tur Shulchan Aruch (printed in Berlin 1702) which belonged to Rabbi Yaakov Emden (Germany, 1697-1776) — were taken by  R. Akiva Males, and are republished with permission of Columbia University’s Rare Book and Manuscript Library.

In the summer of 2014, I was invited to serve as a scholar-in-residence in Harrisburg, Pennsylvania. Rabbi Akiva Males, who serves as the rabbi of Kesher Israel Congregation, invited our family to his home for Shabbos. Over Shabbos, I noticed an unusual wall hanging. It was a photograph of the Tur O.C. 224. But not just any Tur; it was the Tur that belonged to Rav Yaakov Emden. The page was filled with writing in every space left by the printer. As I took note of a burn in the right-hand corner, I sensed that the page had a deeper meaning and I asked my host what it was.

Rabbi Males shared with me the following story. He had been researching the laws pertaining to a specific berachah: Upon seeing a place where one has earlier experienced a miracle that saved him from imminent danger, he makes a blessing with the following words: “She’asah li neis ba’makom hazeh – Who performed a miracle for me at this place.” Rabbi Males was exploring whether one is required to say that blessing with Hashem’s Name or not. (See commentaries to Tur and Shulchan Aruch, O.C. 218).

In Mor Uketziah, Siman 218, Rav Emden writes that several times, he was up late at night learning by candlelight when he fell asleep from exhaustion, and the papers on his desk, along with some wooden items, caught fire from the candle he had been using. As a result of these fires, he lost many of his papers, notes, and letters. However, he already had copies of those which were lost. He acknowledges that if he hadn’t woken up in time from his deep sleep, the desk and his sefarim would have also caught fire, and he would have been in grave danger. As such, when this happened, he bentched HaGomel with a minyan to thank Hashem for saving his life. 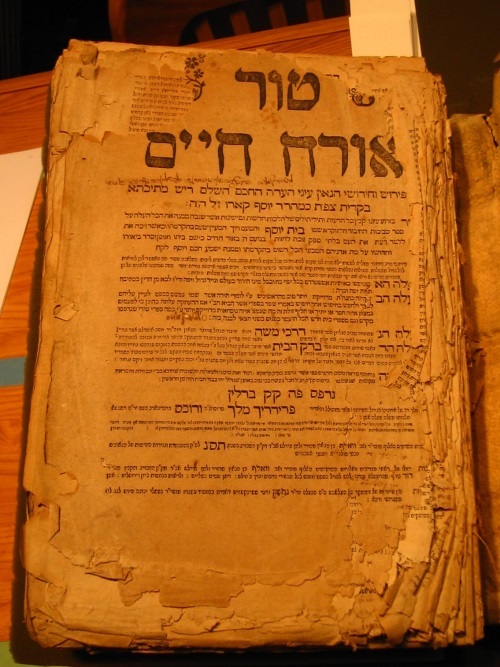 He goes on to write that one of the times this occurred, he had been up learning from his Tur, and he fell asleep while it was open to Hilchos Berachos. Embers from that fire burned a hole through several pages of Hilchos Berachos – including Siman 218, which deals with the berachah of “She’asah li neis ba’makom hazeh.”

It seems that he saw the burn in his Tur at exactly that spot as a sign from Shamayim that this incident qualified as a neis, and he needed to recite the berachah. He goes on to offer explanations why he feels that when this berachah needs to be recited, it should be recited using Hashem’s Name – even when the miracle is not supernatural, as in his case.

Framed just below the photograph of the page from Rav Emden’s Tur was his accounting of the miracle he had experienced. I looked at the picture of the Tur carefully and stared in wonder. I asked my host how he had gotten hold of that photo. He explained that when he had read the piece about Rav Emden and the fire, he had noticed a footnote in Rabbi Schacter’s edition of the Mor U’Ketziah stating that Rav Yaakov Emden’s very own set of Tur Shulchan Aruch was located at Columbia University in New York City. Rabbi Males referred back to Rabbi Schacter’s PhD dissertation, and was amazed to learn that after a long chain of events, many items from Rav Yaakov Emden’s personal library had ended up in Columbia University’s Rare Book and Manuscript Library. 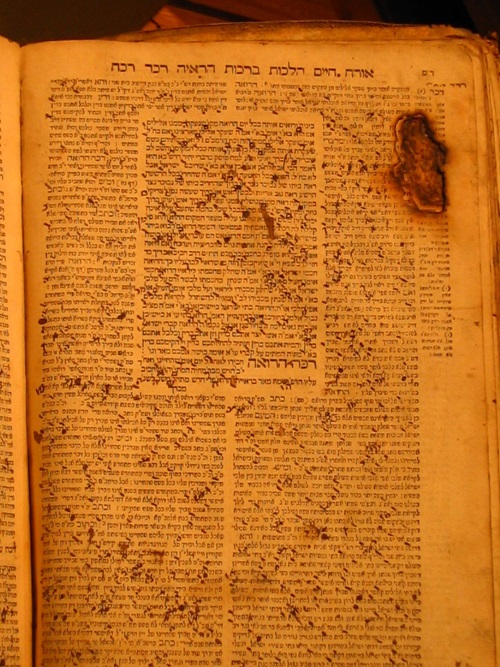 Rabbi Males felt that he had to see Rav Emden’s Tur with his own eyes. And so, he contacted the university and arranged a visit, in which a librarian wearing white cloth gloves directed him to a glass-walled room. The librarian removed the precious old volumes and placed them on the table before him. He trembled in disbelief. This volume had so much sanctity, so much history. He turned to the proper page, and there, before his eyes, were the burnt pages of Rav Yaakov Emden’s Tur. Sure enough, just as Rav Emden described in his Mor U’Ketziah, the burn passed through Chapter 218. After analyzing the burn, Rabbi Males realized that Rav Emden’s Tur Shulchan Aruch had been opened to Chapter 224 when the fire he described had broken out. Though Rabbi Males was excited about his find, he was filled with a tinge of sadness, thinking about how lonely those sacred books must be without anyone to learn from them. However, the staff members at Columbia did allow him to carefully photograph the page upon which the embers had fallen, and that is how it ended up on his wall.

As I listened to this incredible tale, I could not believe that I had come to Harrisburg, Pennsylvania, and walked away with such a precious piece of Jewish history.

But the story does not end there. 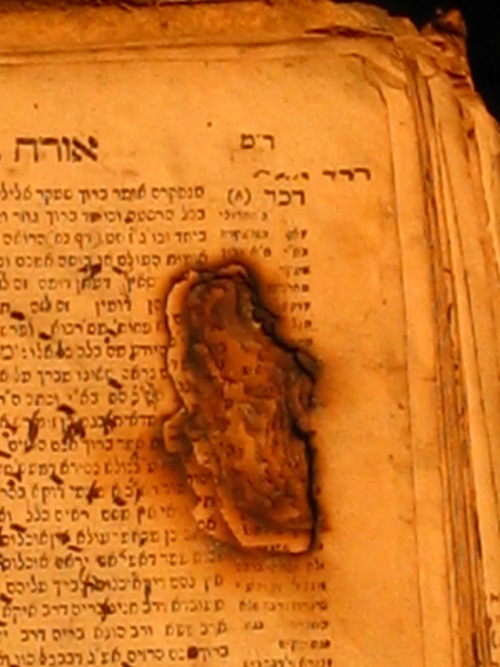 A few days later, I received an email from a cousin who had an interest in Jewish genealogy. As I read through the email, I was able to trace my father’s family from his mother’s side all the way back 15 generations – all the way to the Maharal of Prague. As I read through each name, I wondered about each name on the list and what kind of life its bearer had led. And then, I read a name and I froze. It was the name of my ancestor from the 1700’s – 11 generations back – Rav Yaakov Emden!

I thought again about Harrisburg. I imagined the fire that nearly took Rav Emden’s life. And as one of my sons said to me, “If he did not catch the fire in time, who knows if we would be here today?”