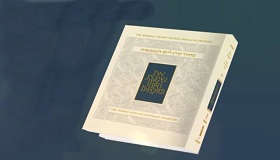 Is the Yom Ha-Atzma’ut Liturgy for Everyone?

Posted by: Gil Student in From The Hashkafah Files, Magazine Apr 22, 15 0

The additional prayers for Yom Ha-Atzma’ut are standard in Religious Zionist synagogues in Israel but much less so in America. I believe the reason reflects different ideological priorities outside of Israel, which can best be understood by examining the early documentation of the prayers’ origin.

The most comprehensive study of the origins of the Yom Ha-Atzma’ut liturgy is R. Shmuel Katz’s comprehensive article in the 3-volume series in honor of the seventieth anniversary of the Israeli Chief Rabbinate (Ha-Rabbanut Ha-Rashit Le-Yisrael: Shivim Shanah Le-Yisudah, vol. 2, pp. 804-966). A translated and highly condensed summary is published in the recent Koren Machzor for Yom Ha-Atzma’ut and Yom Yerushalayim, which in addition to the full liturgy for the days includes extensive commentary and a large collection of important essays. R. Katz studied the Chief Rabbinate archives as well as contemporary newspapers, particularly Ha-Tzofeh, the Religious Zionist organ, in order to recreate the discussion and evolving practices. The date and liturgy for a celebratory day was subject to debate and contradictory pronouncements.

At the time, the State was at war, Jerusalem was under siege and the Chief Rabbis were dealing with numerous critical issues, including the arrival of Holocaust survivors, many of them widows with uncertain information about their husbands’ deaths. Despite all this, the historical significance of renewed Jewish sovereignty in the land of Israel was overwhelming. When Israeli troops conquered parts of Jerusalem and raised an Israeli flag over the city, Rav Yitchak Herzog, the Ashkenazic Chief Rabbi drove around and told anyone who asked him that this was the beginning of the Redemption (using the terminology of the Talmud (Megillah 17b) that the Aschalta Di-Ge’ulah, beginning of the Redemption, will be war) (Katz, p. 814).

Despite the contradictions in how to observe the day that would eventually be called by the Knesset “Yom Ha-Atma’ut,” I see one consistent thread throughout the proclamations of the Chief Rabbis: they declared the onset of the “Aschalta Di-Ge’ulah.” After the UN vote approving a Jewish state in Israel, the Chief Rabbinate Council issued a proclamation declaring Shabbos Parashas Vayeishev of that year a day for prayer and thanksgiving. The proclamation concluded with a prayer that God grant them continued success as he did with the “beginning of the Redemption” (Katz, p. 816). In the first official communication by the Chief Rabbis about Yom Ha-Atzma’ut, a letter to the Chief Rabbinate Council sent three weeks after the Knesset declared the national holiday, the Chief Rabbis called it “the day of joy of the beginning of the Redemption of the Jewish people” (Katz, p. 833). Indeed, R. Katz highlights this term in his quotations because it is highly significant.

Years ago, I differentiated between Messianic Zionists and Hopeful Zionists. The former believe, as the Chief Rabbis declared, that we are experiencing the beginning of the Messianic Redemption, even though the messiah has not yet appeared. Following Rav Tzvi Hirsch Kalischer, they see a messianic chronology in which the messiah arrives midway through the Redemption. In contrast, the latter group consciously refrains from interpreting current events in prophetic terms. We can’t say with certainty what cosmic significance the events we are witnessing my have but we know that Jewish sovereignty in Israel is a good thing for both religious and practical reasons.

The Yom Ha-Atzma’ut liturgy was collected and composed from a Messianic Zionist perspective. For whatever reason, in 1949 the Chief Rabbis had difficulty settling on a liturgy for the day. Therefore, Rav Shaul Yisraeli and Rav Isser Yehuda Unterman–two formidable Torah scholars, the latter to eventually become Chief Rabbi–took the initiative to compose a service and present it to the Chief Rabbis for approval. With a few significant changes by Rav Bentzion Meir Chai Uziel, the Sephardic Chief Rabbi, this liturgy was approved and became standard for Yom Ha-Atzma’ut.

The liturgy for Yom Ha-Atzma’ut is messianic. While many passages can be read as referring to redemption from danger, others clearly refer to the final Redemption. The commentary in the Koren Machzor points this out in places. The evening service includes selections from Lekha Dodi, commonly recited on Shabbos eve. The paragraphs included refer to the Redemption: “The prayers of the current service were carefully chosen to express our acknowledgment that Yom HaAtzma’ut is only the beginning of the redemption process.” This is a modest and restrained messianism but certainly not something a Hopeful Zionist would declare.

Toward the end of Ma’ariv, the congregation recites an adaptation of a passage from the blessing of Rosh Chodesh (Koren, p. 112). The Yom Ha-Atzma’ut version declares that God redeemed us (not just our ancestors) from slavery to freedom and requests a complete redemption. This, too, indicates the beginning of the final Redemption.

Quite explicitly, after hearing shofar at the end of Ma’ariv, the congregation states: “May it be Your will, Lord our God and God of our fathers, that as we have merited to witness the beginning of redemption, so may we merit to hear the sound of the shofar of our righteous anointed one, swiftly in our days” (Koren, p. 114). You don’t need a subtle reading to see the messianism here.

The “Al Ha-Nissim,” Shehecheyanu and Hallel that some say (the Koren Machzor, pp. 88-91 explains the different views) do not, in my opinion, express messianic themes. They can equally refer to thanksgiving for military victory. The special Haftarah readings that some include is arguably messianic (Koren, p. 385ff from Jer. 10:32-12:6). While those of us in the Diaspora read this passage about the messiah on the eighth day of Pesach as a message of hope, its inclusion on Yom Ha-Atzma’ut seems like a messianic declaration. However, it could be plausibly interpreted as a hopeful reading. The prayer for the State of Israel, which many congregations read every Shabbos but is particularly important to Yom Ha-Atzma’ut, is explicitly messianic in referring to the State as “the first flowering of our redemption” (Koren, p. 387).

What is a Hopeful Zionist to do? I see two reasons to recite the Yom Ha-Atzma’ut liturgy. One is as an expression of Messianic Zionism. While I was not educated in the Messianic Zionism path, which is mostly centered in the Hesder and other pro-army yeshivas, as I grow older I find myself more sympathetic to their theology, albeit not of their politics. This is somewhat contrarian, since the Disengagement from Gaza has caused this ideology to lose favor among many. While I am going in the opposite direction, I’m not there yet.

But there is another reason a Hopeful Zionist would recite the messianic liturgy of Yom Ha-Atzma’ut–as an act of patriotism. The Chief Rabbinate instituted these services. A patriotic Religious Zionist may view following the Chief Rabbinate’s ruling a civic duty. What more appropriate way can there be to celebrate the establishment of a Jewish country than by following its official ceremonies and rituals? Put slightly differently, reciting the liturgy is an act of unity with all Israelis and all people who support the State of Israel. Except that most Israelis do not go to synagogue on Yom Ha-Atzma’ut. It is more an act of affiliation with Religious Zionism. Yom Ha-Atzma’ut is the Religious Zionist day, for both Messianic and Hopeful Zionists, and therefore its liturgy is the text for all Religious Zionists. Viewed in this way, reciting the Yom Ha-Atzma’ut prayers is an act of religio-political affiliation, no small matter.

Some may put it more halakhically: the Chief Rabbi is the Mara De-Asra of the country, its official halakhic decisor. Therefore, his decision about the liturgy is binding even if its language and underlying worldview makes some uncomfortable. Rav Shaul Yisraeli (Amud Ha-Yemini, ch. 6) argues that the Chief Rabbi is the Mara De-Asra but many find that really he is merely a figurehead. Additionally, those of us who, for whatever (usually insufficient) reason, live outside Israel are not subject to the Chief Rabbi’s authority.

Is patriotism or religio-political affiliation enough of a reason to recite Messianic Zionist liturgy that you do not believe? For some, it may be. Others may not even consider the issue. Others may simply be comfortable reciting prayers that don’t completely conform to their beliefs. But there are some Hopeful Zionists who reject the liturgy, following the example of Rav Joseph B. Soloveitchik, who denounced the official Yom Ha-Atzma’ut liturgy in the harshest terms.

Be that as it may, Koren’s new Machzor is a fascinating study guide, full of important essays, insightful commentary and sensitivity to the many ways of celebrating renewed Jewish sovereignty in the Holy Land.