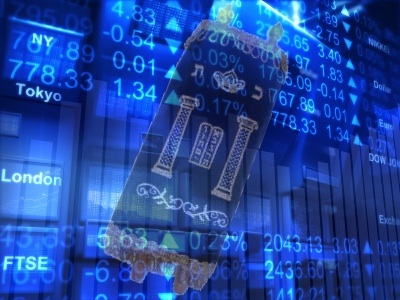 Can Judaism Save Capitalism?

Posted by: Gil Student in From The Hashkafah Files, Magazine Apr 29, 15 11 Comments

Eric Cohen’s impressive argument for a uniquely Jewish conservatism includes a long section on economics. Quoting R. Jonathan Sacks and Dr. Isaac Lifshitz, Cohen makes a case that emerges from Jewish sources for Free Market Capitalism. However, as Yuval Levin points out in his response to Cohen, Judaism is consistent with capitalism but does not necessarily advocate for it. Yes, the Torah protects property rights and advocates productive labor, but there is more to capitalism than earning a salary and keeping it. [1]I disagree that Judaism encourages competition. Torah teachers are a unique exception to the regulations of hasagas gevul that prevent ruinous competition. What role, then, can Judaism play in economic ideology?

Levin seems to think that Judaism has little to teach the world about capitalism. I suggest that while Judaism may not advocate a specific economic theory that developed a dozen centuries after the close of the Talmud, it can teach the world how to properly implement it. This is a particularly timely task because recents events emphasize how desperately capitalism needs direction.

It is one thing to wax passionately about free markets in theory. Getting down to the nitty-gritty implementation is quite another. Free markets require regulation to prevent abuse, such as monopolies and corruption. As we have seen multiple times over the past century, such as in Russia over the past two decades, free markets without sufficient protection will not remain free for very long. The rich and powerful grab control and become richer and more powerful. Some argue that, to a lesser degree, this has happened throughout the free world as income inequality grows and the wealthiest few keep awarding themselves higher salaries and oversized bonuses while under- and unemployment stubbornly persist.

The 2008 Economic Downturn nearly destroyed Capitalism. While financial watchdogs propped up the global economy at exorbitant cost, the vast majority of people suffered unemployment, loss and financial uncertainty. Mistrust of Capitalism grew to catastrophic proportions. If not for the comical ineptitude of the Occupy Wall Street movement, the financial system as we know it may have been overthrown. Despite this revolutionary failure, a new generation is rising that fears Capitalism and distrusts free markets. What could not be accomplished through revolution may yet be achieved through legislation. The inherent unfairness of Capitalism, the growing visibility of income inequality, may spark angry legislation disturbing the free markets.

Economists make policy recommendations, which if approved become required by law, based on the expected social and economic impact. One main approach is called Welfare Economics, which measures the benefit to the public of proposed regulations (it has no connection to the Welfare System). This is a purely pragmatic evaluation emanating from a consequentialist view of right and wrong. If a policy has positive economic consequences, it should be implemented.

Judaism rejects this entire approach to governance. Free markets should not be ruled by cost-benefit analyses but by objective rules of right and wrong, good and bad. Rabbi Aaron Levine dedicated his career as an economist to arguing this point, which he most clearly expressed in the introduction to his posthumously published Economic Morality and Jewish Law. Welfare Economics can lead to absurd results, such as the argument that toxic waste should be dumped freely in less-developed countries. The world needs a deontogical approach, an ethical system with which to evaluate policy proposals based on their merit, not just their consequences. For R. Levine, this basis is Halakhah, Jewish law.

It might seem odd to argue that an ancient ethical system, sometimes accused by critics of being immoral (although usually from a superficial analysis), to lead the way. But we are talking about much more than a PR strategy. We need a systemic overhaul of the way we think and speak of economic issues. Free Markets must become a moral issue and its policy decisions made based on what is right and wrong. For its part, Halakhah can only guide modern economies if it is taken out of the pre-modern world. Decisions must be made based not only on a deep familiarity with the rules and concepts of Jewish tradition but also expertise in contemporary economics. When the two fields are married, as a number of outstanding scholars have accomplished, we find a remarkable union that offers insight into the fine details of economic policy, the small decisions that cumulatively grease the wheels of free markets.

R. Levine compares Welfare Economics and Halakhah in many cases. For example, deceptive advertising damages customers and is therefore subject to regulation. However, when an advertiser lies about prices, it is rarely penalized because regulators believe that a focus on price ultimately leads to lower prices, i.e. it has a positive consequence for customers. In contrast, Halakhah forbids falsehood and therefore, if implemented in regulation, would ban ads that provide incorrect price information. Judaism teaches that the rule of honesty should prevail in the marketplace, not just an economically or socially useful honesty.

Similarly, insider trading can be debated based on the impact to stock market participants. Does it improve market efficiency by providing incentive to insiders to manage better or does it allow for quick gain that leads to poorer management? For R. Levine, this consequentialist thinking is beside the point. The inside information belongs to the company and Halakhah forbids profiting from someone else’s property. Economic policy should be determined by rules governing what is right, not predictions of likely outcomes and their corresponding benefits. Being right means doing right, not doing whatever it takes to reach a useful end.

In his response to Cohen, Levin writes that he can see Judaism playing a role of moralism in a Jewish conservatism but what can the religion offer in the economic realm? While he was looking for a Jewish theology of entrepreneurship, he already had his answer. Capitalism desperately needs a strong dose of economic morality. Regulation based on morality would prevent some of the immoral incentives that led to the recent economic downturn, many of which still exist. It would demand incentives that foster responsibility and long-term thinking, regulate executive compensation packages to serve shareholders and demand responsibility from corporate boards that cannot be quickly passed on to insurers.

An implementation of Capitalism based on economic morality would not engage in the class warfare that is rampant among social policy advocates, nor accept dubious predictions common among consequentialists. Competing notions of social engineering are beside the point. The focus on effective regulation is the morality of a given action–is it inherently proper?

Jews should be morally invested in the implementation of meaningful economic regulation that requires proper behavior of all parties. Capitalism can only survive if it continues to inspire hope. To do this effectively, it must adhere to basic rules of fairness and right and wrong.