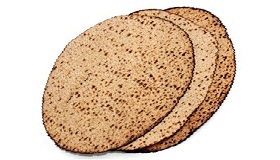 The Meaning of Matza

Matza, symbolizing our recognition that the spiritual roots of things are beyond our grasp even though God granted us the ability to operate within and improve the world, is the opposite of ĥametz. Therefore, on Pesaĥ, when we are engaged with the most fundamental elements of faith, we do not mix even one iota of ĥametz in our food. We eat only matza, which remains simple and thin throughout its baking, without going through any additional process of swelling.

Through our humility before God, expressed in the matza, we internalize the faith, first revealed at the Exodus from Egypt, that God actively watches over the world and elected Israel. To be sure, there were elite individuals who believed in God even before the Exodus, but their connection with the divine was of a personal nature. The wholeness of faith was first revealed only at the Exodus, with the formation of a complete nation containing all strata of society destined to manifest God’s name in the world.

Matza comes to remind us of faith and is therefore called the “food of faith” (meikhla de-mehemnuta) by the Zohar (2:183b). By eating matza on the Seder night with the proper intent, one achieves faith, and by eating matza all seven days of Pesaĥ, one implants that faith firmly in one’s heart (Pri Tzadik, Pesaĥ 9).

Since matza signifies faith, it is understandable that its entire manufacturing process must be performed very meticulously. This is because the roots of all things depend on faith, and any small flaw in faith can cause tremendous destruction in the world.

We can thus understand why the nation of Israel came into being as slaves in Egypt. All other nations develop naturally, from the ground up, from family to clan to tribe to nation. As they grow, they develop cultures that evolve out of the circumstances of their lives, the climate of their territories, and their conflicts with their neighbors. As part of the emergence of their culture, they develop some type of deistic belief. Since human beings are involved in their invention, such beliefs are idolatrous.

In contrast, Israel became a nation as slaves, devoid of any culture. They could not develop their own culture while enslaved and lacking national self-esteem. At the same time, Egyptian culture was foreign to them and possibly despised by them, as it was associated with their tormentors. Israel was thus a tabula rasa, free of preconceived notions, and perfectly capable of absorbing the true faith based on divine revelation and accepting the Torah without introducing human considerations into its fundamental principles. The impoverished, unembellished matza alludes to the condition of the Israelites at that time.

Excerpted with permission from Peninei Halakha: Laws of Pesah 1:6