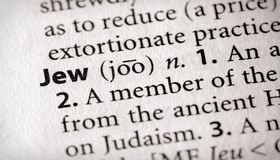 Posted by: Gil Student in From The Hashkafah Files, Magazine Mar 6, 15 0

It is well known that the book of Esther does not contain God’s name explicitly, although tradition finds various hints to it. I think the following qualifies as an interesting hint.

The book of Esther refers to the Jews as “Yehudim” (Judeans or Jews) rather than as “Yisrael” or “Bnei Yisrael,” and Mordechai is specifically called “Ish Yehudi.” The Gemara (Megillah 13a) explains that Mordechai was called “Ish Yehudi” because anyone who rejects idolatry is called a “Yehudi.” The Maharsha explains that within the name Yehudah is the Tetragrammaton. Therefore, righteous Gentiles should also be called with God’s name.

I saw a question on this quoted from R. Raphael Katz (Hamburger) in his Responsa Ve-Shav Ha-Kohen, no. 38. Why would a specifically Jewish name like “Yehudah” or “Yehudi” be used to refer to someone who rejects idolatry? Noahides — Gentiles who are bound by the seven laws of Noah — are also obligated to reject idolatry! If so, any good Gentile should also be called an “Ish Yehudi”, which is clearly a preposterous suggestion. R. Katz answers that, according to some halakhic authorities, Gentiles are only obligated to reject outright idolatry but are allowed to worship God and other beings — shituf. Since Gentiles are not obligated to fully reject idolatry while Jews are, Jews are called “Yehudim” with God’s name in it. (Note that this follows the position of R. Moshe Isserles [See Shakh, Yoreh De’ah 251:7] and those who agree with him. There are other significant authorities who disagree. See Pischei Teshuvah, Yoreh De’ah 147:2.)

This idea can explain an interesting biblical story. When Rus told Naomi that she would be going with her, she used a phrasing that is considered to be an explanation of the basic concepts of conversion. One of her phrases is “Your God is my God” (Ruth 1:16). The Maharsha (Yevamos 47b) asks how this is significant, since Gentiles are also obligated to worship God. The Torah Temimah (Ruth 1:65) answers that if Gentiles are allowed to worship God and other beings (shituf), then Rus was declaring her allegiance to God alone and accepting the obligation to worship only God.

2015-03-06
Gil Student
Previous: Seven Reasons Rabbis Should Be Criminals
Next: Vort from the Rav: Ki Sisa