Let Us Sanctify His Name in the World 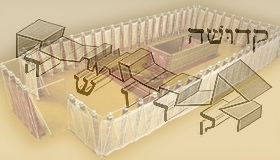 The parasha of Vayakhel deals with the structure of the Mishkan and its vessels, while Pekudei focuses on the priestly garments. During a regular year, Parashat Vayakhel is read together with Parashat Pekudei. However, on a leap year, theseparsahiot are read separately. This leads us to a question regarding the relationship between the Mishkan and the garments. Do the priestly garments and the Mishkan form an organic unit, which is artificially divided on a leap year due to pressures of the calendar? Or are the garments and the Mishkan separate units, which are combined in a normal year in order to complete the Torah by the end of the year?

The fact that Parashat Teruma, which details the structure of the Mishkan and its vessels is always separated fromTetzave, which deals with the priestly garments, seems a strong argument for distinction, However, the opening section ofParashat Teruma indicates that the Mishkan and the garments are components of an organic whole:

And this is the offering which you shall take of them: gold, and silver, and brass; and blue, and purple, and scarlet, and fine linen, and goats’ hair; and rams’ skins dyed red, and skins of techashim, and acacia-wood; oil for the light, spices for the anointing oil, and for the sweet incense; onyx stones, and stones to be set, for the ephod, and for the breastplate. (Shemot 25:3-7)

The objects that are listed include materials required for the Mishkan and the vessels, as well as those needed for the garments. The section concludes with the inclusive statement, “And you shall make for Me a Mishkan, and I shall dwell in your midst” (25:8).

Moreover, the Torah brackets the “milechet ha-Mishkan” unit. The opening bracket is the introduction quoted in the previous paragraph. The closing bracket is a summary that appears towards the end of Parashat Tetzave, after the command to make the priestly garments:

And there I will meet with the children of Israel; and [the Tent] shall be sanctified by My glory. And I will sanctify the tent of meeting, and the altar; Aharon also and his sons will I sanctify, to minister to Me in the priest’s office. And I will dwell among the children of Israel, and will be their God. And they shall know that I am Hashem their God, that brought them forth out of the land of Egypt, that I may dwell among them. I am Hashem their God. (29:43-46)

The repetition of the purpose of the Mishkan, to allow Hashem to dwell in our midst, as it were, is a clear indication that these verses form a closing bracket to the milechet ha-Mishkan section. By including the Mishkan, the vessels, and the garments within these brackets, the Torah is signaling that they are all members of one unified set.

Similarly, at the beginning of Vayakhel, the priestly garments are listed together with the Mishkan and the vessels when Moshe gathers the people to command them to build the Mishkan. Finally, only after the work on the Mishkan vessels and garments was completed does the Torah conclude: “Thus was finished all the work of the Mishkan of the tent of meeting; and the children of Israel did according to all that Hashem commanded Moses, so did they do” (39: 32).

From all the above, it appears that Vayakhel and Pekudei form one organic unit. Accordingly, it is only on a leap year that the two are divided along artificial lines, in order to “stretch” the Torah to fit the elongated year.

The theme of replicating the image shown to Moshe on Har Sinai is often repeated, but only regarding the Mishkan and its vessels. At the conclusion of the subsection dealing with the vessels, the Torah adds: “And see that you make them in accord with the model which is being shown to you on the mountain” (25:40). Similarly, the subsection dealing with the construction of the structure of the Mishkan ends: “And you shall put up the Mishkan according to the fashion which has been shown to you on the mountain” (26:30). This theme repeats itself once again after the instructions of the bronze altar: “As it has been shown to you on the mountain, so shall they make it” (27:8).The contrast to the garments is striking; this theme is not mentioned anywhere in the entire section that describes the priestly garments (28:1-43).

These observations seem to lead us to the conclusion that the garments and the Mishkan are independent units, corresponding to the way the portions of the Torah are read on a leap year. Of course, this would contradict the aforementioned indications that the two combine to form one organic unit.

From all we have said, we are forced to conclude that although the Mishkan and garments are both members of the same set, the relationship between them is far from seamless. In fact, the Torah deliberately separates the two sections – Teruma andTetzave are divided by the command to bring oil to light the menora. At first glance, this section seems out of place, and many commentators attempted to explain its location. Perhaps, this segment was placed out of context intentionally in order to separate the Mishkan from the garments.

We find a parallel to this at the beginning of Parashat Pekudei. After documenting the construction of the Mishkan and its vessels, the Torah summarizes with a detailed account of all the materials donated to for the building of the Mishkan. This section ends with a reference to the priestly garments: “And from the blue, and purple, and scarlet, they made plaited garments, for ministering in the holy place, and made the holy garments for Aharon, as Hashem commanded Moshe” (39:1). Presumably, the appropriate location of this section is the end of Parashat Pekudei, after documenting the manufacture of the garments. Why was this “summary” placed before describing the actual production of these garments?

In this context, it is worth noting the discrepancy between the mesora and the division of the Torah into chapters, generally attributed to Stephen Langton, Archbishop of Canterbury (1228). According to the mesora, this verse concludes the previous section, which focuses on the account of the donated materials. However, according to the chapter division, it is the introductory verse of the subsequent section, which documents the manufacture of the garments. The chapter division was actually determined as a response to our question; since it is illogical to summarize before the actual production, the pasuk was reinterpreted as an introductory verse. However, according to our mesora, the verse cannot be reinterpreted. How then can we explain the strange location of this “summary”?

Based on our proposal, we can suggest that the Torah intentionally divided the description of the production of the garments from that of the Mishkan. In this way, the Torah tells us that the Mishkan and the garments are two independent subsets of the greater set called milechet ha-Mishkan.

We have shown that the combination of Vayakhel and Pekudei, as it is read on a regular year, is an organic combination insofar as together these portions form the unit of ‘milechet ha-mishkan. Nevertheless, the separation of the two on a leap year, as well as the division of Teruma and Tetzave, is not an artificial separation. Rather it is a division between the mishkan and the priestly garments, along lines that were drawn by the Torah.

4. The Vision on Har Sinai

What is the significance of this separation? Why does the Torah insist on informing us of the division between the Mishkan and garments? Moreover, why does the Torah express this discrepancy with the thematic distinctions mentioned above? How does the vision on Har Sinai describe the uniqueness of the Mishkan and its vessels? How is the singularity of the priestly garments captured by the command of Hashem to Moshe?

In order to solve this problem, we must explain the meaning of the vision of the Mishkan and its vessels that Moshe was shown on Har Sinai. There is a fascinating midrash that says the following:

Immediately, when Moshe went up to the higher spheres, Ha-Kadosh Barukh Hu opened the seven heavens and showed him the upper Beit Ha-Mikdash. (Pesikta, Yitro, piska 20)

This midrash builds on an aggadic theme found in many medrashim – that there is a heavenly sanctuary parallel to earthly sanctuary built by Yisrael. According to the Pesikta, the vision revealed to Moshe on Har Sinai was that of the heavenlyMishkan and its vessels.

The idea of this midrash is that earthly worship parallels the pure, ideal worship of the celestial spheres. The “malkhut” ofHashem as an absolute concept has not yet been universally accepted by man. Therefore, in the earthly realm, Hashem’s throne is not yet complete. However, according to the midrash, there is another, higher realm, where this “malkhut’ finds expression; there is an existence of abstract truths where Hashem’s reign is universally accepted and His existence is all-encompassing. In this higher existence, there is a Mikdash where all join to worship Hashem. It was this Mikdash that was revealed to Moshe, who was charged to command Yisrael to build an earthly Mishkan modeled after the celestial one.

The celestial vision revealed to Moshe contained the Mishkan in its entirety, including the holy ark, the table and the menora. However, there is one thing that Moshe did not see in that vision – there are no kohanim in heaven. The heavenlyMishkan is ministered by pure heavenly bodies; whether this means actual angels or some other abstract idea is irrelevant.

The entire concept of the earthly Mikdash is that finite man, with all his frailties and insecurities, should freely choose to worship Hashem. In the Kedusha service, we say, “Let us sanctify His name in this world just as His name is sanctified in the celestial heavens.” Hashem’s name is sanctified in the heavenly realm of absolute truths, where there is no free choice. However, Hashem created man to sanctify His name here on earth, among human beings who are given the ability to choose, who can succeed only because they are capable of failure, and whose acceptance of Hashem’s rule is meaningful only because they are able to reject it.

The priestly garments are worn by the kohanim, human beings elected to service the Mikdash. There are no priestly garments in the celestial Mikdash because no kohanim are found there. The statement, “as you were shown on the mountain,” is found only with respect to the Mishkan and its vessels, which are earthly expressions of the ideal upper Mikdash.

On the other hand, the factor that separates the earthly Mishkan and makes it unique is the very fact that it is ministered by finite human beings. The free choice made by man to accept Hashem’s reign and to worship Him is the singular domain of the lower Mikdash here on earth. This uniqueness is expressed by the human element found in the earthly Mikdash – thekohanim. The kohanim worship Hashem and accept His reign and His commandments as a human act of free will, and it is that free choice to worship Hashem and accept His commandments here on earth that fills the lower Mikdash with meaning. It therefore comes as no surprise that the predominant theme unique to the priestly garments is the refrain “as Hashem commanded Moshe.”

Rav Yair Kahn has been a Ram at Yeshivat Har Etzion since 1987 and is head of its Overseas Students Program. He has been the coordinator of the Virtual Beit Midrash Gemara Iyun Shiur for several years.