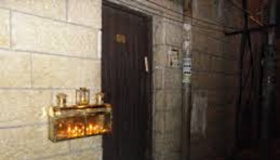 There is a well-known dispute between Rashi and Tosafos regarding the proper place to light Chanukah candles.  The Braisa teaches (Shabbos 21b) that the candles should be lit “at the entrance of one’s home – outside (על פתח ביתו מבחוץ).”  Rashi understands the statement literally and states that the candles should be lit outside the door of one’s home.  Hence, the candles will be situated in one’s front yard – not in public property.   However, Tosafos (s.v. מצוה) argue and suggest that this Braisa, instructing one to light outside the door of his home, was addressing a specific case where one does not have a front yard, and the front door of his home opens into the public domain.  However, if one has a front yard, the correct place to light is outside the entrance to one’s front yard, with the candles situated in public property.  Tosafos provide two proof-texts to support their ruling.  One is from a later Braisia (23a) that states that if one’s yard has two entrances it needs candles at both entrances.  Tosafos conclude from this Braisa that the correct place to light is by the yard’s entrance and not the door of the house.  The view of Tosafos is accepted le-halacha by the Tur and Shulchan Aruch (siman 671).

However, two prominent Rishonim record an explanation attributed to the great Tosafist R. Isaac of Dampierre (Ri Ha-Zaken) that suggests that he was in agreement with Rashi. [1]Sefer Mitzvot Gedolot (SeMaG), Aseh Derabonon 5, and Hagahot Maimoniot, Hilkhos Chanukah 4:10.  Note also Rashi, Shabbos 23a s.v. חצר.   The Semag is certainly a reputable source for the … Continue reading  According to these later Rishonim, Ri taught that the Braisa requiring one to light at both entrances to his yard – which the printed Tosafos used to support their view – did not truly mean a yard with two entrances, but rather a home with two entrances.

Ri Ha-Zaken was one of the most illustrious Tosafists, and his lectures served as the basis for most of the printed Tosafos that appear on the margins of current day editions of the Talmud.  Indeed, the Bach (671 s.v. ומניחה) is perplexed that the opinion of “Tosafos” quoted in tractate Shabbos would not be consistent with the view of the Ri Ha-Zaken, since “anonymous Tosafos passages are from the Ri.”

How do we address the concerns of the Bach?  Can the view of Ri be squared with the printed Tosafos?  A recently discovered manuscript provides the missing puzzle piece.

Hundreds of Hebrew manuscripts from the period of the Rishonim are stored in libraries in the lands of the former USSR.  Behind the iron curtain, these manuscripts were inaccessible to the general public.  However, with the fall of the USSR in 1991, many of these libraries were opened to the world, and the Hebrew manuscripts were microfilmed and are now available to the general public. [2]For more information about how to access these microfilms, visit the website of the National Library of Israel’s Institute of Microfilmed Hebrew Manuscripts: … Continue reading  One of the most significant manuscript collections for Torah study is the Gunzburg Collection housed in the National Library of Moscow. [3]For more about the Gunsberg collection and the story of Israel National Library’s attempt to purchase and transport it to Israel, see http://he.wikipedia.org/wiki/דוד_גינצבורג.   In that collection, manuscript #636 is a previously unknown manuscript commentary on tractate Shabbos authored by a student of Ri Ha-Zaken and heavily based on Ri’s lectures.  The commentary contains many verbatim quotes from the Ri and captures many of his verbal formulations.  In 2007-2011, Machon Ofeq, headed by R. Avraham Shoshana, published this manuscript in two volumes as “Tosafot Ri Ha-Zaken ve-Talmido.”  This work contains many important contributions to the study of Tosafos on tractate Shabbos, for it is an earlier “layer” of the Tosafist teachings that eventually appeared in the printed Tosafos. [4]For more on the development of the printed Tosafos, and for the central role played by Ri’s academy in that process, see A. Leibowitz, “The Emergence and Development of Tosafot on the Talmud,” … Continue reading

In this manuscript commentary, the relevant passage for our discussion (21b s.v. בפתח) contains two important additions from the Ri.  First we are told that the Ri actually ruled like the view found in “Tosafos” and not Rashi.  The manuscript reads: “Therefore it appears to my teacher [= the Ri] that if one has a yard, lighting is to be done at the entrance to the yard, near the public domain (הלכך נראה לר’ דהיכא דאיכא חצר מדליקין על פתח החצר הסמוך לרשות הרבים).”

What about the explanation of Ri that is found in the later Rishonim?  This too is found in the manuscript commentary.  After stating Ri’s ruling, quoted above, the manuscript commentary quotes verbatim from Ri as follows: “However, I could suggest that the later [Braisa] of a yard with two entrances refers to a house with two entrances… accordingly, one would really light at the entrance to his house (ומיהו הייתי יכול לומר דההיא דלקמן דחצר שיש לה ב’ פתחים היינו שיש לבית ה[פתוח] בה ב’ פתחים… ולעולם מ[דליק] על פתחי הבית”).” [5]Ri’s conclusion does not take into account the other proof-text brought by Tosafos from the case of a candle with two wicks.  This will be addressed shortly.

Thanks to this previously unknown manuscript we learn that the ruling of the printed Tosafos is not only consistent with the ruling of Ri, as the Bach anticipated, but is the ruling of the Ri.  The explanation of Ri recorded in the other Rishonim was merely an alternate perspective offered by Ri in his lecture to deflect the proof brought from the Braisa regarding a yard with two entrances.  Anyone familiar with Talmud lectures knows that the teacher will often suggest an alternative perspective or note a weakness when introducing a particular proof-text.  This apparently was the Ri’s intention when he prefaced this statement with, “I could suggest.” [6]Indeed, in this case the Tosafists still had another proof-text – the candle with two wicks – that was not deflected by Ri in this passage.  It appears likely that the editors of Tosafos – in their desire to shorten the text – did not include this last statement by Ri in the Tosafos passage since it was merely a possible deflection offered in the flow of Ri’s lecture, and did not influence his conclusion. [7]That the editors of the printed Tosafos shortened the text of the earlier commentaries is well documented.  For Rishonim who note this phenomenon see Terumas ha-Deshen, #19, and She’elos … Continue reading