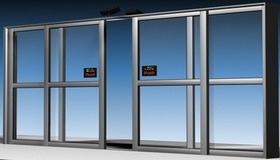 Halakhic authorities and common practice have unanimously accepted that Shabbos regulations forbid, at least on a rabbinic level, actively using electric appliances. This includes turning these appliances on or off. However, debate was recently renewed in an Israeli journal over passively adjusting these devices. As the world becomes more automated, as video cameras become ubiquitous and energy conserving censors become commonplace, the ability to even minimally function on Shabbos demands closer consideration of the halakhic viability of this technology.

In 2003, Rav Elyashiv Knohl published an article in the journal Techumin (no. 23) suggesting that you may trigger an electronic sensor [1]I used the term “electronic sensor” here in a general sense to include thermal, proximity and other types of sensor that are triggered by human motion and/or presence. According to Rav … Continue reading in specific circumstances. He first discusses whether triggering a sensor is an indirect act–gerama–which is permissible in a situation of need. He concludes that this is a minority view of the Magen Avraham which may only be followed in a time of great need. His example is an automatic door into a hotel when no one else is around who will trigger it and you will otherwise be left outside for a long time. In a footnote, R. Yisrael Rosen, the journal’s editor, disagrees that this can ever be considered gerama and rejects the lenient ruling.

More generally, though, he builds on a responsum by Rav Shmuel Wosner (published in that journal and later in Shevet Ha-Levi 9:69) permitting walking past a sensor that turns on a light. If you do not want the light to turn on and do not intentionally trigger the sensor, then, Rav Wosner rules, you cannot be considered someone who commits an act. You are merely walking on your way as events happen without your consent. Rav Knohl feels that this can be generalized as long as you do not intentionally trigger the sensor.

In the past decade, Rav Knohl’s article has had little impact in halakhic literature. Recently, Rav Dror Fixler and Rav Eli Reif published an article going even farther (Emunas Itekha, 104). They similarly base their view on Rav Wosner’s responsum, albeit finding additional bases for it in the Talmud and codes. For example, Rambam (Mishneh Torah, Hilkhos Shabbos 21:2) rules that you may walk on spit that is on a dirt road, even though you will be violating a biblical prohibition, since you are merely walking on your way. Similarly, Ritva (Shabbos 140a sv. mahu), regarding rubbing a garment to soften it while also cleaning it, writes that we look at the permissibility of an action’s primary purpose, regardless of whether the forbidden aspect is also intended.

Rv Fixler and Rav Reif conclude that triggering a sensor is different than flipping a switch. If you walk past a sensor, even though you will definitely trigger it, you are not committing a forbidden pesik reisheih because you are not doing any act. According to them, if you are walking on your way for any purpose and trigger a sensor, even if you want to trigger it, you are not liable for the result. You are legitimately walking and the sensor’s activity is not your concern–even if you want to trigger it. However, if you approach the sensor solely to trigger it, and you are not walking on your way with another purpose in mind, then you are liable for the result.

They add that even if you reject this logic and consider triggering a sensor to be a pesik reisheih, it should still be allowed. Many authorities permit a pesik reisheih when the prohibition is only rabbinic. When it comes to electricity, most activities are only rabbinically forbidden. They quote this rabbinic prohibition in the name of Rav Yosef Eliyahu Henkin. While many other authorities can be cited, this particular citation will be important.

Most signficantly, this lengthy article is followed by a brief article by the authors’ teacher, the noted authority Rav Nachum Rabinovich (link). Rav Rabinovich explicitly agrees with their conclusion, also citing Rav Henkin. He repeats the argument of Rav Fixler and Rav Reif that a person does nothing when triggering a sensor; the sensor acts on its own, responding to what occurs around it. Rav Rabinovich writes, “Essentially, the person does not act on the sensor but the sensor acts on the person.”

Rav Rabinovich quotes the Rambam (Mishneh Torah, Hilkhos Shabbos 11:4) who allows someone, while walking on his way, to step on a pest (insect). Ramban (Milchamos Hashem, Shabbos 45b in the Rif) explicitly states that this includes intentionally stepping on the pest. Triggering a sensor is less problematic because the person does not commit any act, unlike stepping.

Rav Rabinovich concludes that in past generations, rabbis forbade activities that were similar to forbidden acts to prevent Shabbos from becoming like a weekday. However, the revolution of automation is different and cannot be treated in the same way. Automation will free people from work and allow them to enjoy Shabbos more.

Rav Yisrael Rosen, head of the Zomet institute, responds negatively to both these articles. He has previously written a lengthy article on this subject, in Emunas Itekha (no. 102) subsequently published in his recent book, Be-Chatzros Beis Hashem, and he wrote a specific response to the above articles (link). To Rav Rabinovich’s last point regarding turning Shabbos into a weekday, Rav Rosen points out that sensors can easily be used to do just this. You can set your lights to turn on as you enter a room, your stereo to play your favorite music when you step near it, your oven to cook when you stand in a specific place, etc. You can even arrange for your fields to be plowed and seeded at your control, all through electronic sensors.

Rav Rosen states that he does not believe that automation is inherently problematic. The halakhic issues arise when the work is done based on human interaction. Automation must be completely automatic, without need for human action.

However, this is not Rav Rosen’s main objection. Once upon a time, rabbis questioned whether a person who plows with a tractor is considered having plowed the field. After all, he did not touch the field and merely manipulated a machine. The Chazon Ish ruled, to great acceptance, that the tractor is only a tool for the person to plow. Similarly, when an electronic sensor is the normal way to perform a forbidden action, it becomes a human tool. The exact technology of the sensor is irrelevant. We have to look at the results. If a person’s actions trigger an electronic reaction then it is as if the person flipped a switch.

Consider a gun connected to an electronic sensor. As you approach, it shoots in the other direction. If you wait for another person to stand directly in the gun’s sights and then you intentionally walk past the gun on your way to the car so the other person is shot, are you exempt? You intentionally trigger the sensor so the gun shoots. Rather, Rav Rosen argues, triggering a sensor is like flipping a switch or pulling a trigger.

He additionally points out that Rav Fixler and Rav Reif base their approach on Rav Wosner’s responsum. However, Rav Wosner clarified, as an addendum to the end of the responsum when published as Shevet Ha-Levi 9:69, that he was only discussing a case in which you do not intentionally trigger the sensor. Even if you benefit from a light turning on as you pass the sensor, Rav Wosner contends that if you do not intend to turn it on you are innocent. This is debatable because you benefit from the light. Regardless, Rav Wosner’s ruling cannot be extended to a case in which you intentionally trigger the sensor, which he explcitly forbids.

Rav Rabinovich, Rav Fixler and Rav Reiff quote Rav Yosef Eliyahu Henkin, particularly some recently published teshuvos. Rav Henkin’s great-grandson, Rav Eitam Henkin, published an article in response in the latest issue of Emunas Itekha (no. 105 – link), which he says has his father’s (Rav Yehuda Herzl Henkin) agreement. The younger Rav Henkin’s article contains almost everything I want to say on the subject, only better than I could have said it.

Rav Henkin’s first point, which Rav Rosen mentions briefly, is that this discussion is not new. Home thermostats, operating on the functional equivalent of heat censors, have existed for decades. The question of opening refrigerator doors, and thereby likely triggering the motor as the temperature rises, was addressed years ago. While the technology has grown in complexity, the halakhic question remains largely the same.

In all those discussions, no authority suggested that the ovens, refrigerators or thermostats acted independently. Those who ruled leniently found other reasons. We are not dealing with autonomous machines but automation triggered by human intervention. Rav Henkin quotes the Rambam (Mishneh Torah, Hilkhos Shabbos 1:6) who says that any forbidden action that could not be done without a prior action is considered a pseik reisheih. The Rambam focuses on the inevitability of the actions, not the reason for their connection. The only remaining question is whether a person benefits from the inevitable work he causes (nicha leih).

Consider the extensive discussions of riding an elevator on Shabbos. One of the questions is whether causing forbidden work by standing in the elevator is forbidden. This is even less causative than triggering a sensor through movement yet still forbidden according to many.

Rav Henkin also points out that the permission to step on a pest is extensively discussed by the commentators. Some believe it is permitted because the action is not intended for itself, a melakhah she-einah tzerikhah le-gufah that is normally rabbinically prohibited but permitted here due to the need. Others suggest that we are dealing with life-threatening pests. Regardless, it is irrelevant to the case of turning on a device through a sensor.

UPDATE: A reader pointed out this response by Rav Fixler and Rav Reiff to Rav Henkin: link. I had not seen it when I wrote this essay.

Rav Rosen and Rav Henkin both point out that the issues surrounding electronic sensors have been discussed both explicitly and implicitly for decades.

From what I can tell, the permissive position is unique and unsustainable.