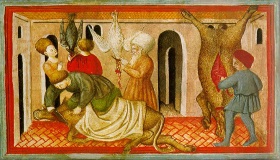 I once played with a sheep in the morning and then ate it for dinner that night.  At the time, I was a non-observant teenager living with a farm family in the French countryside, near the city of Le Mans.  They kept a lamb tied up near a hay loft where I would pet and play with it.  One evening after dinner, I went to play with my friend but found only a large pool of blood.  I realized that I had just eaten my playmate.  That was quite a memorable moment!

In contemporary America, we carnivores think little about the life or the death of the animals we consume.  We like it that way.  If someone is impolite enough to describe the gruesome reality of the “confined animal feeding operations” which produce our meat and eggs, we get squeamish, change the topic, and look away.  We don’t want to know about what goes on behind the walls of commercial slaughterhouses or egg factories whose owners forbid reporters from entering or videoing.  We do not inquire about “battery cages” [1]See here and here (PDF) for details. as small as an open volume of Talmud in which six egg-laying, debeaked hens live their entire brief lives together.  We are unaware that leaking lagoons [2]See here: link (PDF) of animal excrement threaten the health of our soil and water when it should be fertilizing grass for cows to eat instead of the corn they’re fed.

This is one reason, as well, why most of us divert our attention elsewhere at the beginning of the book of Leviticus.  Over and over again, we read about slaughtering, flaying, butchering, eviscerating and sprinkling, and about fat, blood, heads, inner organs, fatty tails of sheep and more.  The “yuck!” factor is one reason why many are queasy about the rebuilding of the Temple and the animal sacrifices that will again be offered there.

I believe that these twin discomforts – familiarity about the lives and deaths of the animals we consume, and contemplating the sacrificial system – share a common element.  Paraphrasing the thought of English essayist John Berger, writer Michael Pollan puts it this way: “The loss of everyday contact between ourselves and animals – and specifically the loss of eye contact – has left us deeply confused about the terms of our relationship to other species. That eye contact, always slightly uncanny, had provided a vivid daily reminder that animals were at once crucially like and unlike us; in their eyes we glimpsed something unmistakably familiar (pain, fear, tenderness) and something irretrievably alien. Upon this paradox people built a relationship in which they felt they could both honor and eat animals without looking away. But that accommodation has pretty much broken down; nowadays, it seems, we either look away or become vegetarians.”

I believe the Torah’s perspective on meat consumption assumes the pre-industrial perspective described above as a given: of course man respects the beast with whom he lives, upon whom his life depends, and into whose soulless eyes he looks before slaughtering it.  The Torah, however, adds its characteristic, sanctifying twist: the holier we are and the closer we are to Hashem, the more sanctified and therefore restricted is our consumption of His animal creations.  The Torah teaches this lesson by incorporating its laws regulating meat consumption into its narrative in a specific manner; i.e., it calibrates the intensity of the prohibitions regarding meat consumption with the covenantal and spiritual level of humanity and the Jewish people.

Consider the Book of Genesis.  Initially, when Adam and Eve dwelt in Hashem’s intimate presence in the Garden of Eden, meat was entirely prohibited.  Only vegetarian fare was permitted : “God said, ‘Behold, I have given you every herb bearing seed which is upon the face of the entire earth and every tree on which is fruit which bears seed – this shall be your food.” (Gen. 1:29)

Sixteen hundred years later, Hashem struck a new covenant with Noah reflecting humanity’s lowered status after the Flood and permitting meat consumption to Noah and his descendants (Gen. 9:3): “Every living, moving thing shall be food for you, just as a green herb; I have given all to you.”  Nonetheless, He still insisted that His human creation respect His animal creations by prohibiting the callous consumption of their meat: “But you shall not eat the flesh with its life, its blood.”  (Gen. 9:4)  The Talmud understands this verse as one of the seven precepts eternally incumbent upon all humanity: an animal must be entirely dead before a human may eat any part of it.

When Jacob encountered Hashem by wrestling with His angel, he gained the name Israel representing his new status as the father of the first family all of whose descendants would remain within Abraham’s covenantal destiny.  Hashem added a new meat prohibition to mark the occasion: the sciatic nerve of an animal’s hindquarters.

The pattern continues in the Books of Exodus and Leviticus: more covenantal sanctity and closeness to God corresponds to more restrictions on the consumption of animals.  The revelation at Sinai transformed Israel’s descendants from a collection of clans into a covenantal nation – and more meat prohibitions are added: “You shall be holy people to Me.  You shall not eat torn meat in the field – throw it to the dog.”  (Ex. 22:30)  “You shall not cook a kid in its mother’s milk.” (Ex. 23:19)

Extending over both books, a long narrative (Ex. Chap. 25 – Lev. Chap. 10) detailing the planning, building, inauguration, and sanctification of the Tabernacle culminates in the return of Hashem’s Presence to the midst of His people: “The Glory of the Lord appeared to the entire people.” (Lev. 9:23)  An entire chapter of extensive prohibitions against consuming all varieties of living things follow immediately: “These are the animals you may eat among all the beasts of the earth…This is what you may eat from the waters, seas, and rivers…These birds may not be eaten…These swarming animals may be eaten…For I am the Lord your God; sanctify yourselves and be ye holy, for I am holy.” (Lev. 11)

God’s nearby presence at the Tabernacle also means that domesticated animals may only be eaten in His Presence, at His altar: “Any Israelite who slaughters an ox, sheep, or goat…and does not present it as an offering to Hashem [in the Tabernacle]…blood shall be ascribed to that man.  He has spilled blood!  That man shall be cut off from his people.” (Lev. 17:4)  When the Tabernacle is nearby, a Jew is “cut off”, losing his share in the next world, if he slaughters an animal outside of the Tabernacle.  As Rashi elaborates, he is like one who spills human blood and who thereby forfeits the eternity of his soul.  (Improper, private animal slaughter is likened to murder!)  Further, the blood of animals which cannot be offered on the altar (e.g., most birds, deer) must be covered after slaughter (Lev. 17:13).  The animal’s life force must be given a proper burial, so to speak.

The intimate, Eden-like closeness of God’s holy people encamped around His Presence at the Tabernacle has returned it to a partial, Eden-like vegetarianism: most of the animal kingdom is permanently prohibited as food.  Much that remains permitted must be consumed in communion with God at His altar.  Animals which die on their own in the field outside the Tabernacle are to be tossed to the dogs as unfit for a holy people.  By contrast, God’s holy people must first kill animals they wish to eat in His holy Temple.  First, the owner orally sanctifies an animal’s unblemished body to God.  Then, immediately before its slaughter and death, he (and not a representative) places his hands directly upon the animal’s head, forging a connection between them, praising God (Maimonides, Ma’aseh Hakorbanot 3:15) as he does so.  He (or a priest) immediately slaughters the animal; the act of slaughter must take place during the day when all can see it.  Priests carefully receive the animal’s blood life-force in holy vessels and return it to God, the Giver of life, at His altar.  They flay and butcher the animal in the Temple courtyard.  Together, the owner and the priests wave the parts to be offered on the altar and consumed by the priests.  Finally, the owner and priests eat their meat in the sanctified precincts of the Tabernacle/Temple or Jerusalem.

A korban shelamim (a “perfected peace offering”), then, is Torah’s ideal of meat consumption: public for all to see; during the day when all can see; holy place, holy priests; fostering an immediate eater/animal connection at the time of slaughter; great attention to the animal’s blood life-force; sharing the meal with God.

Of course, when the Israelites will finally settle in the Land of Canaan, some will inevitably live far from the full intensity of the Divine Presence at the Tabernacle.  Correspondingly, Hashem loosens the requirement that all meat be offered at His Temple (Deut. 12:20-21) and permits the consumption of non-sacrificial meat.  Nonetheless, the requirement that such animals be slaughtered as they would have been in the Tabernacle (Ramban, ad loc) remains in force, as does the requirement not to eat the animal’s life force (its blood) which is fitting only for the altar.  Rashi (ad loc) summarizes the message: “The Torah teaches proper conduct: a person should not want to eat meat, except amidst plenty and wealth.”

Clearly, the Torah permanently permits and sometimes even mandates that we slaughter and eat animals.  Reflecting the natural human familiarity with animals of a bygone era (and that of my French farm hosts), the Torah assumes our ability to look our meal in the eye, slaughter it fully aware of the gravity of taking an animal life, and then eat it.  It prefers, indeed, that such slaughter take place in broad daylight, in public, with the owner’s hands on his meal as he utters praises of God, and in as sanctified a manner possible.

Although such a method is not, alas, presently required of us in the absence of the Temple, I nonetheless believe that, in light of all of the above, Jews who eat meat “amidst wealth and plenty” as well as high educational levels [3]See here (PDF), pp. 42ff. have a special obligation to look past the Styrofoam and plastic in which we buy meat and eggs.  The free market economy interprets each of our purchases as signaling our desire for the product we buy (in this case, meat and eggs), our tacit approval of how it is created and delivered to us (here, industrial slaughter and animal operations), and our request to continue these activities.  Taking great care not to single out kosher slaughter operations for unwarranted particular negative attention, we must be among those who bring the wholesome disinfectant of broad daylight to these matters, so that all may view, critique, and improve the sanctity of their operations.  May our efforts in this regard prompt Him to soon grant us the awesome privilege of serving Him once again through the most sanctified consumption of His magnificent creations in His Temple and Holy City.