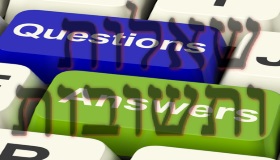 While one may be tempted to review the work on the basis of its novelty as a compilation of sheilot u’teshuvot by women, that would be a mistake. Halacha cannot be determined on the basis of some sort of “affirmative action” for contributors from a hitherto unrepresented “minority.” In putting an Halachic work before the Torah world, the authors implicitly indicate that they would like their contribution to Torah literature to be judged on its own merits.

But how does one judge an Halachic work?

The widespread availability of computer databases has radically changed the world of Halachic writing.

If one lacks appropriate respect for, and deference to, the system and its authorities, how can one issue rulings in the framework of that system?

This change was once captured by a distinguished scholar concerning another scholar: “He knows how to use the Bar Ilan [database of responsa literature] very well.” Resources that were once only at the fingertips of brilliant scholars with photographic memories, like Rabbi Yosef Rosen (the Rogatchover), Rabbi Yosef Engel and Rabbi Ovadia Yosef, are now at the fingertips of almost anyone with access to a keyboard and a computer. If, as Samuel Johnson wrote, “Knowledge is of two kinds. We know a subject ourselves, or we know where we can find information upon it,” then a contemporary Halachic author, with his or her unprecedented capacity to find information, cannot be judged on the basis of his or her encyclopedic citation of sources. For all intents and purposes, the playing field has been leveled.

What we can assess is the importance of the sources that are cited and the quality of the analysis of those sources. Most of the teshuvot in this volume are based on mainstream, standard sources, and accordingly come to conventional, non-controversial conclusions

However, in her responsum on whether a woman can serve as an Halachic judge, Rabbanit Idit Bartov makes extensive use of HaTorah V’HaMadda by Rabbi Jacob Levinson (1876-1955) and Malki BaKodesh by Rabbi Chaim Hirschensohn (1857-1935). While these rabbis did much to defend Torah Judaism in early 20th century America, they are not regarded in the Halachic world as authorities of stature. Rabbi Hirschensohn’s perspectives are particularly problematic. While this is not the place to discuss some of the controversial positions he took (best known among them, his heter for men to use safety razors to shave), it says much that his works are among the very few works of responsa distributed by Machon Shechter, an academic institution affiliated with Conservative Judaism. It is problematic to equate the writings of these rabbis with the those of great authorities such as Rabbi Moshe Feinstein and Rabbi Yitzchak Isaac HaLevi Herzog.

Another way in which we assess an Halachic work is by attempting to identify any bias that may inappropriately affect the author’s perspective. Of course, even the most agenda-driven author will take pains to – at the very least – conceal such bias. Which makes an editorial comment by Rabbanit Bartov all the more surprising.

In the aforementioned responsum, Rabbanit Bartov – naturally enough – deals with the issues presented by the prophetess Devorah. The Tanach states very explicitly that she judged the Jewish people. Many great authorities through the ages – from major Rishonim to major Acharonim – have dealt with the question of why the law that normally women cannot serve as judges does not contradict Scripture.

Rabbanit Bartov cites these explanations, but then adds:

I will note in a personal tone, that it is difficult to read such variegated exegesis, the entire purpose of which is the distortion of explicit verses in Tanach, in order to find an asmachta (a “support”) for a ruling that contradicts the simple meaning of Scripture.

One is dismayed to see such disparaging lines written about the greatest authorities of the ages. This begs the question: If one lacks appropriate respect for, and deference to, the system and its authorities, how can one issue rulings in the framework of that system?

A more blatant lack of objectivity affects the next responsum, in which Rabbanit Bartov encourages a woman to ascend the Temple Mount.

In the first place, Rabbanit Bartov completely omits the enactment of the great rabbis of Jerusalem through the ages – including Rabbi Avraham Yitzchak HaKohen Kook and all subsequent Chief Rabbis – forbidding Jews from ascending the Temple Mount altogether. They forbade it to people regardless of whether they are male or female, and regardless of where they intended to walk atop the Mount.

More egregiously, when approaching the complex sub-issue of whether a woman, even if she is not a Niddah, may ascend the Mount within 72 hours of having had marital relations with her husband, the author flippantly dismisses the issue. Her first piece of “evidence” is a rhetorical question: “Would one entertain the possibility that a woman would refrain from partaking of the Korban Pesach on account of the ‘chumrah’ of waiting 72 hours, and be put in danger of the penalty of karet?”

This line of reasoning is Halachically flawed on several counts, but particularly because the Rambam (Hil. Terumot 7:7) rules, in fact, that within 72 hours of marital relations a woman may not partake of terumah on account of its sanctity. The Rambam makes it quite clear that this is not a stringency but the letter of the law. One is forced to assume that this would be the case across the Halachic board, and a heavy burden of proof rests upon the shoulders of anyone arguing for leniency.

Moreover, in the following paragraph Rabbanit Bartov suggests that any such issue can be remedied by the woman in question douching after relations before going to the mikvah. Yet the great authority Rabbi Moshe Isserles, the Rema (Yoreh Deah 196:13), writes that we are not sufficiently adept at this procedure and may not rely on it in our day and age. Addressing this point, Rabbanit Bartov makes the following astonishing statement:

And even if your family custom is to follow the rulings of the Rema, in this deed [i.e., douching  within 72 hours and relying on it to go to the mikvah], there is no issue of forsaking the family custom, since the Rema did not address the issue of ascending the Temple Mount, but ruled for the Jews of the European diaspora [my emphasis] only in connection with marital laws [as opposed to the laws of tumah and taharah – ritual purity].

Anyone who has learned tractate Niddah knows that Halacha is more stringent in regards to the laws of ritual purity than in regard to marital law – in contradiction of the author’s assumption. Yet even more stunning is the flippant dismissal of a ruling of one the great pillars of Halacha.

We must close by reiterating that we have striven to approach the work independently of the novelty of its authors’ gender. Therefore, this brief critique of the work is, in essence, a critique of the derech that Midreshet Lindenbaum has inculcated in its students. Such critique is gender-blind, and applies to any and all of the instructors who have trained their students to approach issues in the questionable ways that we have touched upon. It behooves the leadership of the institution to note these issues – issues that will very likely bar the works that emerge from their Beit Midrash from taking a place in the mainstream of the Halachic world.

Rabbi Yosef Gavriel Bechhofer is a Maggid Shiur at the Mesivta of Yeshiva Rabbeinu Yitzchak Elchanan and a pioneer of Torah on the Internet. He has written widely and published three books: Bigdei Sheish on Bava Basra, Bigdei Sheish on Shoftim and The Contemporary Eruv.