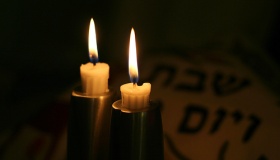 Although there is an opinion that women should not recite the shehecheyanu blessing at candle lighting, but rather to wait to hear it as part of Kiddush, [2]Leket Yosher p. 49; She’eilat Yaavetz 107; Mishna Berura 263:23; Tzitz Eliezer 14:53; Yechave Daat 3:34. common custom is not like this view. Indeed, women whose family custom is to recite shehecheyanu at candle lighting should be sure to do so regardless of all other considerations. [3]Ibid. It is interesting to note that if, for whatever reason, one did not recite or hear the shehecheyanu blessing at the start of the holiday, one may recite it anytime one remembers throughout the duration of the holiday. [4]Mishna Berura 473:1.

In a slightly different approach, some authorities rule that a woman should not answer “amen” to the shehecheyanu recited as part of Kiddush, with the exception of Pesach, at which time she should. The reason for the difference is that the shehecheyanu recited as part of Kiddush on Pesach also serves to cover the other mitzvot of the evening, such as the four cups of wine and the eating of the matza. As such, it would not be a hefsek to respond amen to this specific shehecheyanu. Some also add the Kiddush that is recited on Sukkot eve to this exception since the shehecheyanu recited at that time serves to cover the mitzvot of Sukkot. [6]Shevet Halevi 3:69. See also Kaf Hachaim, OC 473:6. On a related note, even those who do not recite their own Kiddush on Pesach night, but rather hear it from the head of the household, should raise their wine glass and hold it as if they were making Kiddush themselves. [7]Shemirat Shabbat K’hilchata 47 note 26.

Most other authorities, however, permit a woman who recited shehecheyanu at candle lighting to respond “amen” when hearing it again as part of Kiddush. They argue that the shehecheyanu recited as part of the Kiddush is an inherent and integral component of the Kiddush that a woman must hear before she is permitted to eat the Yom Tov meal. Rav Moshe Feinstein explains that just like the shehecheyanu blessing is not a hefsek for the one making Kiddush, it is automatically not considered to be a hefsek for those listening to his Kiddush even if they already fulfilled their shehecheyanu requirement when lighting the candles. According to this approach, answering amen is not considered to be a hefsek. [8]Aruch Hashulchan, OC 263:12; Zecher Simcha 34; Ein Eliezer 47; Be’er Moshe 8:215; Igrot Moshe, OC 4:101, 4:21:9; Rivevot Ephraim 1:182; Minchat Shlomo 2:58:2. See also Nitei Gavriel, Erev Pesach … Continue reading

It is important to point out that the concern that answering “amen” to the shehecheyanu blessing recited as part of kiddush might be a hefsek is only relevant for a woman who intends to drink from the Kiddush wine (or grape juice). A woman who does not have the custom to drink some of the wine upon which Kiddush was recited is completely permitted to answer ‘amen’ to shehecheyanu. This is because only the one who actually recited the Kiddush is required to drink any of the wine or grape juice. There is no true obligation for others present to drink any of the Kiddush wine even though widespread custom is to do so. [9]For more on the issue of participants drink from the Kiddush wine, see: OC 271:14, Shemirat Shabbat K’hilchata 48:11, and Shulchan Aruch Harav, OC 190:5.

Finally, some people have the custom to always recite their own borei pri hagafen blessing when drinking wine after hearing kiddush recited by someone else. [10]Piskei Teshuvot 271:10. A woman whose custom it is to do so is permitted to answer “amen” to shehecheyanu, or to any other blessing for that matter, before drinking the wine. This too is consistent with all that has been explained above. This is because any possible hefsek with a woman answering “amen” to the shehecheyanu at Kiddush can only affect the legitimacy of the “…borei pri hagafen” blessing and the permissibility of drinking the kiddush wine. It has no bearing, however, on the legitimacy of the actual Kiddush, and the permissibility of beginning one’s Yom tov meal.

It is interesting to note that in most Yemenite communities, especially the “Baladi” and “Dardaim” ones, Yom Tov candles are not lit at all. And even those that do light Yom Tov candles generally do so without reciting the accompanying blessing. [11]Peulat Tzadik 3:270; Arichat Hashulchan 2:178. It is interesting to note that some Rishonim hold that no blessing is recited on Shabbat candles either. See Tosafot, Shabbat 25a s.v. “chova” and … Continue reading This is because there is no mention of a requirement to light Yom Tov candles in either the Gemara [12]The sefarim do make mention of a Yerushalmi that requires the lighting of Yom Tov candles, however, no such passage exists in the text of the Yerushalmi that we have today. It might just be that this … Continue reading or Rambam [13]The Rambam, in his Perush Hamishnayot to Shabbat 2:3, does mention a requirement to light Yom Tov candles. As a general rule, however, only what the Rambam wrote in his Mishna Torah is considered to … Continue reading — the two, almost exclusive, sources of halacha for Yemenite Jewry. Indeed, the primary reason we light Shabbat candles is due to the requirement of “shalom bayit”, namely, so that there should be light in the home on Shabbat eve. [14]Shabbat 25b. On Yom Tov, however, one is permitted to light a fire (from a pre-existing flame), and therefore, there is no true need for Yom Tov candles at all.