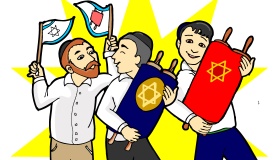 I don’t like dancing, not on Simchas Torah nor at bar mitvahs nor even at my wedding. It’s a chore I’ve learned to deal with. Looking over the mechitzah on Simchas Torah, I am both troubled and envious.

Many of the women I see look very bored. Why should they sit bored on this holiday? On the other hand, they do not have this communal, family and customary obligation to dance. They can sit in the women’s section and open a sefer and learn. I can’t do that without being reprimanded. In many synagogues, the women watch the men dance, some with great delight, others bored and others just talking with each other and ignoring the dancing. To level the field and give women more options, decades ago some synagogues began women dances and even introduced Torah scrolls into the women’s dances. This was and remains controversial.

The Beit Hillel organization in Israel recently published a responsum permitting women to dance with Torah scrolls on Simchas Torah. They base their view on R. Nachum Rabinovich’s ruling in Si’ach Nachum (no. 40), explicitly permitting this practice. Without detracting from R. Rabinovich or the men and women of Beit Hillel, I cite here contrary opinions.

Primary among them is that of R. Joseph B. Soloveitchik. He is quoted by his nephew, R. Moshe Meiselman, as deeming the practice impermissible (he does not say forbidden). While R. Meiselman’s assertions in the name of his uncle can sometimes be questioned, and in the next issue of Jewish Action I do just that on one specific point, readers should note that the following quote appeared in a book published in 1978 as part of R. Norman Lamm’s Library of Jewish Law and Ethics. I am not suggesting that R. Lamm agrees with everything in this book (he indicates in his Foreword that he does not). I am suggesting that if an explicit quote in this book in R. Soloveitchik’s name was incorrect, in all likelihood he would have made it known. I am not aware of any claim that this specific depiction of his view is inaccurate.

An associated issue, although technically totally different, is the permissibility of women dancing in the synagogue with Torah scrolls during hakafot on Simhat Torah. This practice has been opposed by all contemporary rabbinic authorities. My revered teacher, Rabbi Joseph B. Soloveichik, told me that he opposed this practice when questioned by synagogues in Brookline, Massachusetts, and New York City. The basis for this ruling, he told me, is that the Talmud in Berakhot [63a] which says that just as there is an etiquette that regulates one’s behaviour when visiting someone else’s home, so too there is a tradition that regulates behaviour in the synagogue. Thus, for example, eating in the synagogue is not permitted. An element of proper synagogue behaviour, such as the prohibition against eating in the synagogue, is explicated in legal detail by the Talmud and by subsequent codes of Jewish law. The same applies to the introduction of innovations which our ancestors considered to be in conflict with the feeling of respect and awe owed to the synagogue. Proper synagogue behaviour is determined by practice and tradition. Since it has been the age-old practice of synagogues that women do not dance with Torah scrolls during hakafot, the introduction of this practice would be a violation of synagogue etiquette.

R. Menachem Schneerson, the late Lubavitcher Rebbe, wrote a 1975 letter to R. Shlomo Riskin, voicing his opposition to women’s dancing with a Torah scroll on Simchas Torah. You can see the letter in Hebrew here: link. He argues that:

R. Dov Lior (link) writes that throughout the generations, women have not danced with Torah scrolls. The differences between men and women are real, each with their own religious roles. When women act in ways that men traditionally have, they detract from the respect due their own roles. Therefore, women certainly should not dance with Torah scrolls.

I don’t claim that this list is comprehensive. I appreciate if readers post in the response section what other halakhic authorities have said or written on the subject. In the end, it is up to the synagogue rabbi to consult with his posek and decide what is permissible and appropriate.