A New and Old Wind is Blowing 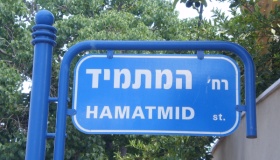 Is the “Yeshiva world” too insular? Does its single-minded focus on Talmud and codes stifle its members from exploring the world of ideas? One graduate of Volozhin expressed that very notion in a poem he wrote in 1898, entitled Hamatmid. Chaim Nachman Bialik writes of his profound ambivalence towards the schools of his youth. He expresses his admiration for the dedication of yeshiva students to their Talmudic studies on the one hand, while critiquing what he viewed as a narrow world that was insular to broader intellectual ferment. Yet many people would dare to disagree and a recent seminar that took place in Long Island serves as ample proof that Bialik would need to update his famous poem were he alive today. Perhaps Hamatmid 2.0.

Certainly the Internet has made knowledge available on an unprecedented scope. Unstructured online learning through searching, reading and watching educational videos offers insular yeshiva students the opportunity to stretch their intellectual wings. But even before the Internet, public libraries enabled yeshiva students to take books out and read them in their free time. In Volozhin, studying disciplines beyond the yeshiva curriculum was generally discouraged although some students could be found clandestinely reading literature of the haskalah. However, times have changed and the curious student in many yeshivos find the time and tools to learn about the world and its great thinkers. Granted, some yeshivos actively discourage intellectual exploration. But this ideological closedness is hardly a uniform policy. However, what’s missing in this autodidactic universe is structure and the guidance of experts. A recent small seminar took a big step in filling this gap, with the goal of training a cadre of future community leaders.

An overview of the seminar is needed to grasp the surprising magnitude of this modest event. Under the aegis of the Tikvah Fund, the seminar invited 17 promising young men (average age in the late twenties) who spent significant time in yeshivos such as Ner Israel, Mir & Shaar Hatorah (and one person who took an uncommon path from Bais Hatalmud to Bar-Ilan) to spend a week immersed in non-standard Torah study, engaging with the contemporary internal and external issues that face our Torah communities. Led by R. Yitzchak Adlerstein, R. Mark Gottlieb and R. Jonathan Rosenblum, the program began each day with a presentation on the weltanschaung of various Torah thinkers, some of whom are often neglected during the standard yeshiva zman, including R. Samson Raphael Hirsch, R. Yisrael Salanter, R. Yosef Dov Soloveitchik and R. Avraham Yitzchak Kook. Presentations were geared toward the rigor of yeshiva students, beginning with classical texts and proceeding to extract from them approaches to the great issues of Jewish thought, with spirited debate all along the way. Issues including rational versus mystical approaches to Judaism, the proper role of academic Jewish studies (such as the traditionalist Wissenschaft of R’ David Zvi Hoffman) and how to relate to the non-Orthodox and gentile worlds were raised and a genuine milchamtah shel torah echoed through the Glen Cove Mansion in Long Island where the seminar was held.

The second part of the program exposed the students to sophisticated thought in the fields of economics and social and public policy. Dr. James Otteson delivered presentations on the thought of great economists such as Adam Smith and Friedrich Hayek, as well as the moral foundations of free markets and competing visions of political economy. Ryan Anderson, co-author of “What is Marriage? Man and Woman; A Defense,” laid out his argument for protecting marriage’s traditional definition which avoids religious claims and resonates with a wider audience. Dr. Vincent Phillip Munoz, a political science professor at Notre Dame, lectured on John Locke and the origins and evolution of American political thought through Abraham Lincoln and its relevance to contemporary issues of religious liberty. The students’ exposure to political and economic theory introduces these future Jewish leaders to the tools and vocabulary necessary to formulate public policy.

One idea that struck me as particularly timely is the notion of religious liberty. Our faith community derives its value system from a Torah and halacha that doesn’t always conform to the contemporary zeitgeist. Issues such as bris milah (ritual circumcision), shechitah (ritual slaughter) and medical ethics have been flashpoints of conflict in recent years between Orthodox communities and parts of the broader world. Understanding the meaning of religious liberty (not just using it as a catch-phrase), both in its historical context and present usage, is invaluable when advocating for tolerance and acceptance of faith practices in the modern era.

In between presentations, a marketplace of ideas flourished as like-minded budding scholars debated the hot topics of the day. With animated exchanges typical of the yeshiva study hall, abstract theories were applied to real situations in order to clarify the issues and resolve communal problems. Topics included effective advocacy for Israel, organizational challenges facing Jewish agencies, the differences between Torah communities in Israel and the United States and the meaning, application and limitations of the oft misunderstood term “daas torah”. On Shabbos, R’ Meir Triebitz presented a multi-discipline vision spanning many earlier discussed topics, formulating a philosophy of Halacha and arguing for a Jewish theology of politics and economics. In many ways, this aptly capped the seminar, demonstrating how a wholly traditional talmid chacham can incorporate the many different perspectives into a single, Torah framework.

Yet now thinking back on the seminar, two themes resonate as particularly significant. First, responsibility for the entire Jewish community or to coin a phrase, having a klal conscious. Because the seminar’s participants all aspire to find a place in the public square, the seminar included presentations about R’ Moshe Sherer and R’ Nathan Birnbaum, two leading Torah spokesmen of recent times. These larger-than-life leaders articulated compelling narratives for the entire Jewish people. They rejected a utilitarian view bent on the narrow goal of accessing the public coffers, but rather advocated for a deeply Jewish moral responsibility to speak out. They insisted that the traditional Jewish voice must be heard on both issues that are particular to Jews and concerns that are universal to humanity, of which we also have societal interest in engaging. Sadly, their view of askanus, public advocacy, has lost currency today and cries for revival.

The second key takeaway is the rejoinder to Bialik. A choice is often presented between breadth and depth. Some rabbinic voices claim that the only way to become a talmid chacham is to focus intensely and solely on Talmud and codes, to the exclusion of any other field of study including Jewish History, Jewish Philosophy and even Tanach. But that choice is a false dilemma. One can achieve breadth without significantly altering the yeshiva curriculum by finding opportunities outside its schedule. Each participant in this event for expanding horizons was already a yodea sofer, well read in a broad range of traditional texts. Each came firmly grounded in the tenets of our faith yet open to explore new areas of knowledge.

From Volozhin until today, the yeshiva study hall, at its best, nurtures intellectual curiosity so its brightest stars succeed in traditional Talmud study and find additional time and opportunities to ameliorate their unquenchable thirst for knowledge. As I looked around at this seminar, I saw in its participants and some of its distinguished presenters living proof that intense Talmud study of the most traditional kind does not preclude great breadth and depth of knowledge.

Shmuel Winiarz is an alumnus of Yeshivas Ner Yisroel in Baltimore and of Cardozo Law School. He is preparing to pursue an M.A. in Jewish History at the Bernard Revel Graduate School of Jewish Studies.