Why We Do Mitzvos 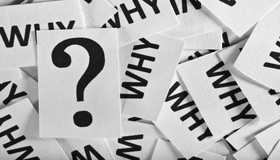 A large part of an observant Jew’s day consists of performing mitzvos, fulfilling religious commandments. How often do we stop to ask ourselves why we do this? Why do we expend so much time and effort in the pursuit of mitzvos? I see three general answers to, or approaches to answering, this question. Two of them revolve around the four sons in the Haggadah.

I. Two Answers for Four Sons

The four sons famously ask questions about the Pesach activity (or, three ask and one is unable to ask). The answer we give is “Avadim hayinu,” we were slaves in Egypt and God took us out. However, simply understood, this response fails to answer one of the question: “Mah he-eidos ve-ha-chukim ve-ha-mishpatim…, What are the testimonies, statutes and laws…” [1]Note that in Deut. 6:20-21, this answer immediately follows the question about eidos, chukim and mishpatim. This question is too broad to refer to just the Pesach rituals. It is about all of Judaism, all the commandments. It is our question: why do we do mitzvos? The answer that we were slaves and God redeemed us does not seem to offer a sufficient response. What is this answer in the Haggadah to the four sons’ questions?

Ibn Ezra and Ramban disagree what this answer means. R. Yehudah Ha-Levi, author of the Kuzari, asked Ibn Ezra why the first of the Ten Commandments refers to God as the redeemer from Egypt and not the Creator. Ibn Ezra (Ex. 20:1) proceeds to answer with an impressive philosophical excursus. In the course of his discussion, Ibn Ezra asks why we do mitzvos and offers three answers. His first explains the “Avadim hayinu response. God freed us from servitude and in response, as a show of gratitude, we obey His commands.

Ramban (Ex. 20:1) explains the reference to the Exodus in the first Commandment differently. God did not free us from slavery. Rather, He redeemed us from Egyptian slavery so that we are now His servants. According to the Ramban, we do mitzvos because God commanded us to. He created us, redeemed us and now retains the right to tell us how to live our lives.

Ramban’s answer is simple and compelling. We do mitzvos because God told us to. There really is no need to overthink the issue or discuss it further. However, Rambam (Commentary to the Mishnah, Sanhedrin, Introduction to Cheilek) divides this attitude in two. We educate children with a carrot and a stick. If they do good, we reward them, and if not we punish them. Similarly, God offers rewards and punishments to people for their success and failure in adhering to commandments.

However, the desire for reward and the fear of punishment are not the optimal reason for fulfilling commandments; that motivation is considered she-lo li-shmah. Mature people follow commandments because God commanded us to. Out of respect for God, we do the right thing and follow His will. The ultimate reason for doing mitzvos is that God commanded us to do so, but not everyone can reach that level of understanding. Those who cannot should obey due to the divine carrot and stick.

The Ibn Ezra’s approach had been previously suggested by R. Sa’adiah Gaon (Emunos Ve-Dei’os 2:1) and thoroughly developed by R. Bachya Ibn Pakuda (Chovos Ha-Levavos, Avodah). R. Sa’adiah argues that natural law (ha-seikhel mechayev) requires the beneficiary of a kind act to respond with another kindness to the benefactor’s liking or at least with a verbal thanks. God continuously sustains us and bestows us with kindness. Therefore, we must respond with a kindness, by fulfilling His request. God’s overwhelming and constant kindness to us demands an impressive response, which is fulfilling the mitzvos.

It is interesting that R. Yitzchak of Corbeil, in his Semak (no. 4), offers two reasons why we must do mitzvos. The first is that we must fulfill God’s commands, either due to reward and punishment or our profound respect for the King of Kings. The second is the debt of gratitude we owe God for His countless and continuous acts of kindness to us.

We have already discussed the Semak‘s attitude to philosophy and his citation of R. Sa’adiah Gaon (link). Here we find another case in which he adopts R. Sa’adiah Gaon’s philosophical approach, albeit without citation. (Neither R. Bachya nor Ibn Ezra quote R. Sa’adiah Gaon as their source.) However, I am not yet ready to change my conclusion that the Semak did not engage in philosophy. [2]Dr. David Berger brought my attention to an article in his Cultures in Collision and Conversation in which he explores this issue at length and reaches a similar conclusion, albeit with more nuance … Continue reading The Semak utilizes the two approaches we discussed above but–significantly, I believe–omits a third.

The Mishnah (Berakhos 33b; Megillah 25a) says that we silence someone who says that God’s mercy extends to birds’ nests. The Torah (Deut. 22:6-7) requires us to shoo away a mother bird before taking her eggs. The Mishnah disallows attributing the reason for this mitzvah to God’s mercy on birds. Rashi (Berakhos 33b sv. midosav) explains that it is wrong to attribute mitzvos to specific reasons. Rather, we must see them as divine decrees. Tosafos (Megillah 25a sv. mipnei) seem to agree. The Tur (Yoreh De’ah 181) explicitly rejects the attribution of rationales to mitzvos. According to these authorities, we cannot find and should not look for reasons underlying the mitzvos. Even if a mitzvah seems designed to show mercy on a bird, we may not assume that this is so. We must see the mitzvah as a divine decree. [3]See also Rashi’s commentary to Prov. 25:2; Gen. 26:5; Ex. 15:26; Lev. 19:19; Num. 19:2, cited in R. Gersion Appel, A Philosophy of Mitzvot, 2008 edition, pp. 33-35, as part of an extensive … Continue reading

Ramban (Commentary to Deut. 22:6) interprets this Mishnah very differently. He believes that we can find rationales for the mitzvos. The Mishnah is only denouncing this specific rationale, that the command to send away the mother bird is due to compassion for the animal. Really, the Ramban contends, the mitzvah is for the sake of people. Sending away the mother bird is a way to ingrain mercy and compassion in people. Rambam (Moreh Nevukhim 3:48) argues that this Mishnah follows a rejected opinion that we do not accept.

Both Rambam and Ramban agree that, in general, we should look for rationales for mitzvos. Indeed, many have followed suit and engaged in this search, this reverse engineering of the laws we have received. In his monumental study of this extensive literature, Prof. Yitzchak Heinemann divides the approaches to mitzvah rationales into three categories, reflecting different personalities: practical, rationalistic and symbolic (Ta’amei Ha-Mitzvos Be-Sifrus Yisrael, 1993 edition, vol. 1 pp. 138-139).

All these different rationales point to another reason we observe the commandments: doing so is good for us. Whether spiritually or psychologically, individually or socially, the mitzvos make us into better Jews.

I find it interesting that the Semak did not offer this reason. He must have been at least a little familiar with the approach. After all, many earlier scholars–including R. Sa’adiah Gaon in his Emunos Ve-Dei’os–offer rationales for mitzvos. Perhaps the Semak omits this approach because he follows Rashi and Tosafos in rejecting it. Perhaps the Semak, like Rashi, believes we must accept the commandments as God’s decrees.

These approaches may not be as far apart as they initially seem. There is a Brisker way of bringing them closer together. The Gemara (Rosh Hashanah 16a) asks why we blow a ram’s horn on the Jewish New Year. One opinion is that the ram’s horn reminds God of Akeidas Yitzchak, the Binding of Yitzchak. Another opinion is that we blow a ram’s horn because God commanded us to. This answer might sound sarcastic but it is actually quite profound. It is implying the futility of searching for God’s reasons, the chasm that lies between our understanding and God’s. We can never fully know why God tells us to do something. But that should not stop us from obeying the command.

Similarly, R. Yosef Dov Soloveitchik (the great-grandfather in his Beis Ha-Levi Al Ha-Torah, Bo sv. di-kvar, p. 9d/18) says that the mitzvos came first and the world was created around them. We do not eat matzah on Pesach because we left Egypt too quickly for bread to rise. Rather, God wanted us to eat matzah on Pesach so He made sure we left Egypt without time for the bread to leaven. What we see in retrospect is not the true reason. However, it is still meaningful to us.

R. Chaim Soloveitchik is reported as having explained that the term for the reasons for the mitzvos, “ta’amei ha-mitzvos,” really means the tastes of the mitzvos. They are our subjective impressions, the meanings we find, in God’s commandments. As long as we do not attribute too much authority to these “reasons,” we can gain much spiritually from them (see this post).

Perhaps we can suggest that Rashi, Tosafos and the others do not object to finding our own meanings in the mitzvos. They only object to declaring that these are the reasons for the commandments, which are ultimately unknowable. They may not even object to the Rambam’s, Ramban’s and many others’ exploration of the meaning of the mitzvos, when seen in this way. Their objection is to the certainty, the attribution of specific motive to the divine will.

It is not just that when we believe we have found the reason for a mitzvah, we may rationalize it away. We have seen this in history and the result is a quick disappearance of other commandments, a marked diminishment of overall religiosity. It is more than that. When we master a mitzvah, when we believe we have fully plumbed its depths, we lose respect for it and ultimately interest in it. When the mystery disappears, the mitzvah loses meaning.

Finding meaning in mitzvos is crucial in building a spiritually aware personality. We spend so much of our time doing mitzvos, how can anyone fail to question why? But a claim to fully understand is the first step to boredom, to moving on to the next challenge. Bridging the gap to divine intent is crossing over the mystery. We can get tastes of the reasons but ultimately we perform them because God, to whom we owe our lives, commanded us to.