Havdala With Wine During The Nine Days 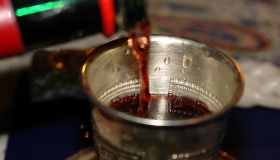 The communal mourning practices during the period preceding Tisha B’Av have changed over time, now challenging the performance of an important mitzvah. The Talmud [1]Ta’anis 26b teaches that as part of our mourning in the period leading up to Tisha B’Av, a number of restrictions were imposed. When the month of Av begins, joy should be limited; during the week in which Tisha B’Av falls, it is prohibited to launder or cut hair. A prohibition to eat meat and drink wine was only formally made for the Seudah HaMafsekes (the final meal before Tisha B’Av). [2]Ta’anis 26b, OC 652:1 Throughout the generations each of these mourning practices was extended by communal custom, leading the Rambam [3]Laws of Fasting 5:6 to record that the universal practice is to refrain from eating meat during the week in which Tisha B’Av falls, while some communities refrain from the first day of Av. Three practices are recorded in the Shulchan Aruch [4]OC 651:9 regarding the eating of meat and the drinking of wine: to refrain from the 17th of Tamuz, to refrain from Rosh Chodesh Av (with a Sefardic variation of eating these foods on Rosh Chodesh but not after [5]Kaf HaChaim 651:125, 126) and to refrain during the week in which Tisha B’Av falls. The universal Ashkenazic practice is to refrain from Rosh Chodesh.

Does this also apply to Mitzvos?

It is clear from all sources that the custom of refraining from meat and wine never applies when there is a mitzvah involved. The Maharil explains that the reason for this exception is that there is no formal prohibition on consuming meat and wine. Our practice is based on a binding community minhag (custom), which the communities never accepted when the food is part of a mitzvah. [6]Minhagim of the Maharil, Laws of Tisha B’Av #5 & #6. This is also the reason that Rav Moshe Feinstein (Igros Moshe OC 4:102) permits shaving during the three weeks before Tisha B’Av for … Continue reading The most significant and obvious example of this is the Shabbos meals themselves, which are not subject to any such restrictions, even if one would start the Friday night meal before sunset or extend Seudah Shlishis into the night. [7]Mishnah Brurah 651:56

Yet we do find that the consumption of meat and wine in various other mitzvah situations generated significant discussion among the poskim. The basic rule is reflected in the words of Rav Yosef Karo who wrote that one may drink the wine of Havdala and Birkas HaMazon. [8]OC 651:10 This is consistent with the idea that the custom never precluded meat and wine when their consumption was part of a mitzvah.

The Ramo, however, records that the Ashkenazic practice is to refrain from drinking wine for Birkas HaMazon and Havdala. Instead, he writes, the practice is to give the wine of Havdala to a child to drink; absent a child, an adult may drink it. He also adds that at a Seudas Mitzvah, a celebratory meal for a mitzvah such as a bris, pidyon haben or siyum, it is permitted for all attendees to eat meat and drink wine.

Following the Ramo’s comment not to drink wine for Birkas HaMazon and Havdala, a parenthetical note is found in the text of the Ramo which references the Responsa of the Maharil as the source of this practice. However, this is not at all what is written in the Responsa of the Maharil–he writes that he never saw his own teachers refrain from drinking wine for Havdala. He does, however, quote those who also allowed drinking wine for Birkas HaMazon, about which he expressed discomfort. Similarly, in the Minhagim of the Maharil, [9]Minhagim of Maharil (Laws of Tisha B’Av #6) it is recorded that he permitted wine for a bris, pidyon haben or siyum, but would not use wine for Birkas HaMazon, even when it would be given to a child. [10]Ibid (#8)

Ostensibly, this ruling of the Ramo seems confusing and perhaps even problematic, since the practices he records do not seem to match the rulings of the Maharil at all. Before proceeding, it is important to note that Rav Moshe Isserles was well aware of the full text of the Maharil, which he quotes fully in his earlier writing, the Darkei Moshe. [11]OC 651:9. He quotes the Maharil saying one is permitted to drink wine at a Seudas Mitzvah, and all the more so for Havdala. The logic of this would presumably be that if we permit eating meat and … Continue reading

While there are several resolutions offered to this dilemma, Rav Moshe Feinstein’s [12]Quoted by his student Rav Aharon Felder in Moadei Yeshurun (vol. 1 page 154 footnote 64). is the most straightforward. Rav Moshe explained that today the common practice is for an adult to drink the wine even if a child is present. This is not a rejection of the ruling of the Ramo, but rather a reflection of the fact that wine was not readily available so throughout the year Havdala was commonly recited on other beverages. This is not true today where wine is readily available and is generally used for Havdala.

Based on Rav Moshe’s explanation, it is clear why the Ramo’s ruling never contradicted the Maharil’s. Given the difficulty in acquiring wine, it was generally not used for Havdala. Accordingly, if a person were to use wine for Havdala it would be viewed as a treat to enjoy, which is most unlike the reason the Maharil permitted its use in the first place. [13]As noted above in note #11. Accordingly, there is no contradiction between what Rav Moshe Isserles wrote in Darkei Moshe and in his glosses to Shulchan Aruch. One reflected the ideal while the other reflected the reality that wine was an uncommon commodity and viewed as a special pleasure.

So what should be done for Havdala?

Based on Rav Yosef Karo’s ruling, the universal Sefardic practice is to use wine as usual. [14]Kaf HaChaim 651:152 Based on all of the above, it would be assumed that the Ashkenazic practice is to either give the wine to a child or to drink it oneself. However, another possibility is also found. Until now, the thrust of this discussion focused on the permissibility of wine. Some took this matter in an entirely different direction, using beer or other alternative beverages instead of wine. [15]Aruch HaShulchan 651:26. Even though ordinarily the use of alternative beverages is only recommended when wine is not available (see Mishna Brurah 296:8), this practice considers the undesirability … Continue reading

Rav Avigdor Nebenzhal [17]Yerushalayim B’Moadeha, (vol. on The Three Weeks, #167) pointed out in the name of Rav Shlomo Zalman Auerbach that it is generally difficult to find such a child who understands brachos but not the mourning for Yerushalayim. Accordingly, Rav Shlomo Zalman would drink the wine himself. It should also be added that given that Tisha B’Av falls in the middle of the summer, by the time Shabbos ends most such children will be asleep by that time as well.

Additionally, it might be suggested that even though for all purposes in Halacha (such as Kiddush, Havdala, Four Cups, etc) grape juice is considered wine, it still does not provide the joy of wine and might be a better choice of beverage on which to make havdala during the nine days.